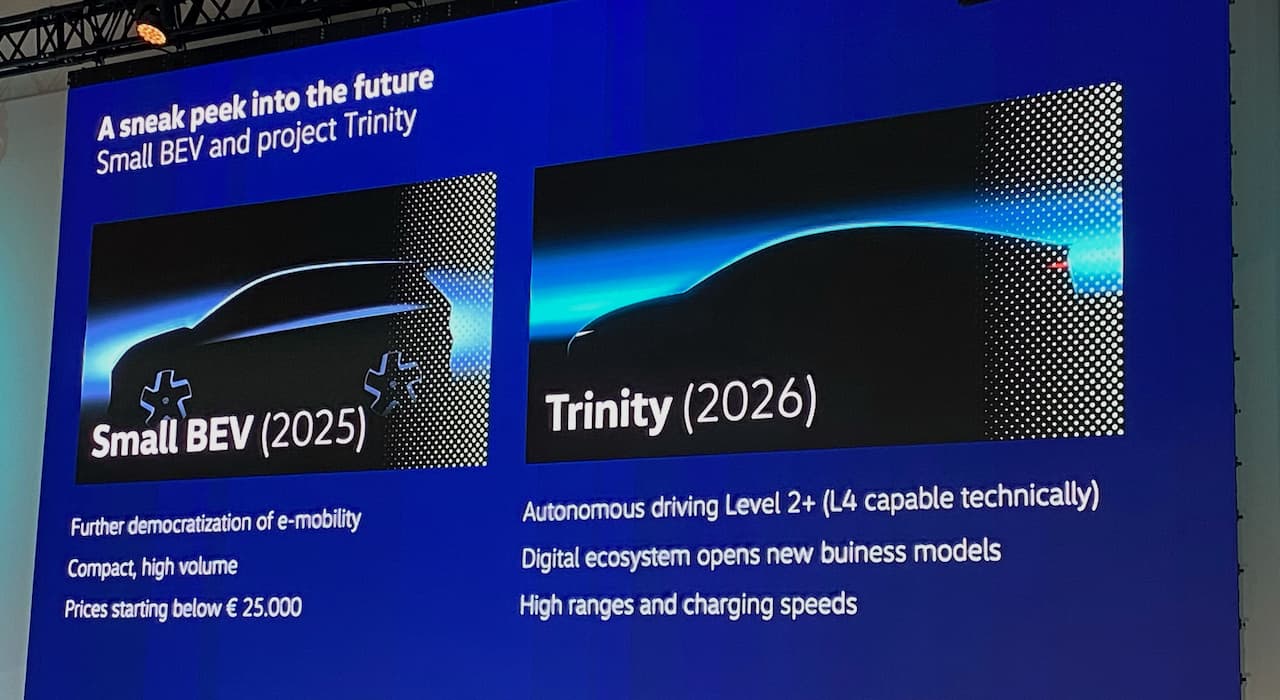 When the VW ID.3 arrived in 2019, it was like the VW Beetle of the 21st century, as it marked a new era at Volkswagen. The VW Trinity will take the baton to continue the wave of technology revolutions at Volkswagen in 2026. At an event held at the Move Experience Center in Amsterdam this month, the company showcased the ID.4 GTX in metal and teased the VW Trinity Project and the purported VW ID.2 entry-level EV.

The VW Trinity is the project name of an all-new pure electric sedan with a flat, sporty body. A lighthouse project and Volkswagen’s software dream car, as the company’s CEO Ralf Brandstatter describes it, the Trinity will offer high range and extremely short charging times. In its Q1 2021 (interim) report, the German automaker said that this sedan is going to “set new standards in terms of range, charging speed, and digitalisation.”

The VW Trinity project will likely sit on the Scalable Systems Platform (SSP), which Volkswagen describes as the next generation of the all-electric, fully digital, and highly modular vehicle platform. The onboard connectivity and software will likely be based on the VW.OS operating system, and Car.Software Org. is in charge of that. VW.OS v1.2 is going into PPE platform models, and the SSP platform models that are due much later will have VW.OS v2.0 on board. Volkswagen may develop the battery cell for the VW Trinity project with the unified cell concept, in which the basic format/design remains the same for most EVs.

While the VW ID.3 was about the start of bespoke EV platforms and developing mass-market EVs from the ground up, the VW Trinity project will mark the beginning of highly software-based EVs. Volkswagen is planning significantly fewer variants and largely standardized hardware for the Trinity and other EVs it plans to launch later in the decade. For the company, this approach would considerably reduce production complexity. In addition, its customers will benefit from having virtually every feature onboard and the flexibility of enabling them any time during the ownership, potentially even years after getting the delivery.

Like streaming service providers offer premium plans for one month or even just a day, automakers may offer on-demand activations of their high-end features, maybe only for trial or maybe even as a permanent alternative to outright purchase. In addition, available software unlocks in these EVs may include performance upgrades to unleash more power/torque from the existing configuration. But, of course, that would affect the range, which we expect to be up to 700 km (WLTP).

Another practical example we can think of here is increasing the charging capacity to a higher level, possibly 250 kW or higher. Moreover, Volkswagen says that the Trinity will have Level 2+ autonomous driving capability but be technically ready Level 4 autonomous driving capable right from the start of production. So, that’s another after-delivery upgrade customers can look forward to.

Volkswagen has confirmed that it will manufacture the Trinity sedan at the main Wolfsburg plant in Germany from 2026. The company may launch it as an Arteon replacement and price it around EUR 45,000.

Featured image was mailed by our supporter Roland Tameling.