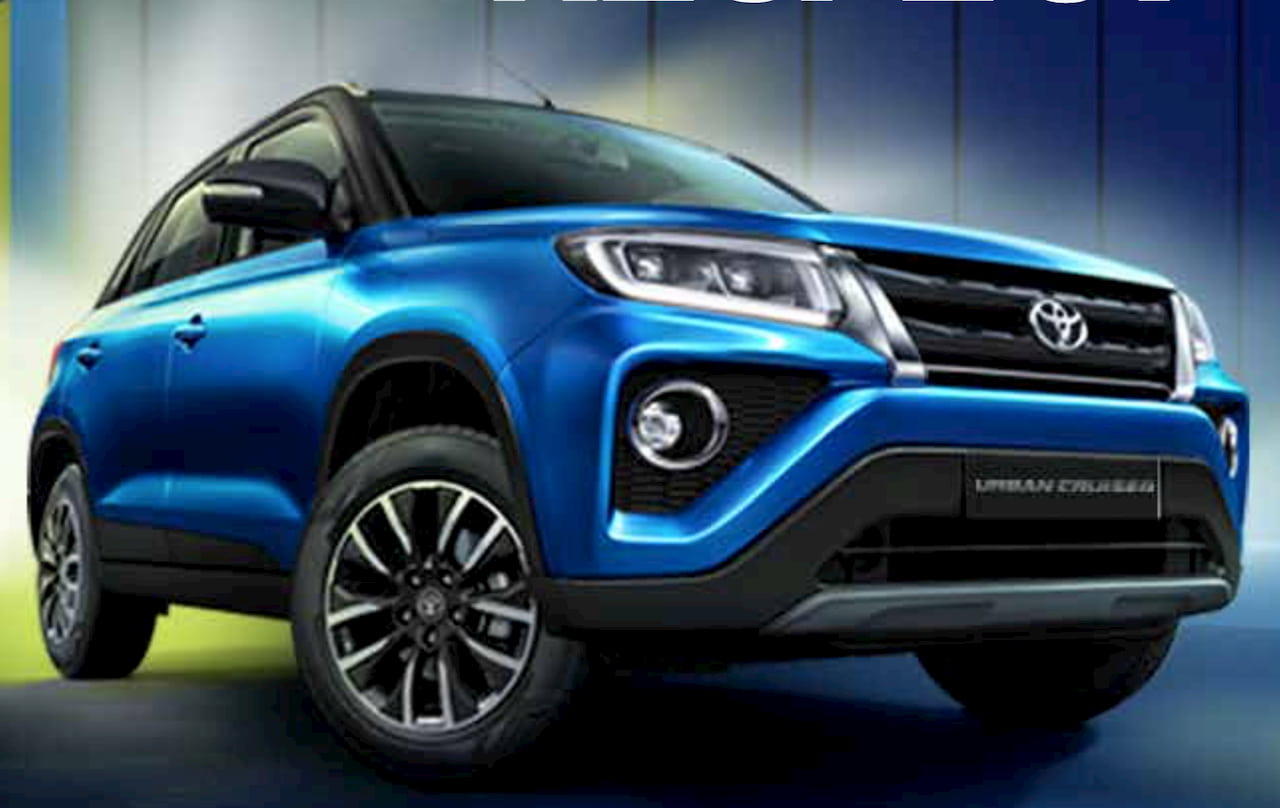 Update: Variant-wise features of the Toyota Urban Cruiser are unofficially out. We have detailed them in the ‘Features’ section of the story, which you can go to from the Table of Contents. Pre-bookings are officially open now and TKM is asking for a deposit of INR 11,0000 for the pre-orders.

TKM has revealed specifications and features of the Maruti Vitara Brezza mechanical twin. According to a release schedule rushlane.com has published, the launch will take place exactly a month later, on 22 September, and the deliveries will begin over a month later, on 30 October.

Why the design changes?

Toyota received some criticism for having not done enough with the Baleno when it repurposed it as the Toyota Glanza last year only changing the grille and badges. Toyota and Suzuki entered a collaboration in March 2019 where the latter would supply some of its cars produced in India for Toyota’s use, and more visual changes are to come in future launches.

TKM confirmed two important details in its announcement earlier this month – its first sub-4m SUV would be called the Toyota Urban Cruiser (the other ‘Cruiser’ is, of course, a world-renowned SUV) and the car would launch this festive season. The company has now said that bookings would open by the end of the month.

TKM used words like “all new” and “unique offering” in the press release announcing the Toyota Urban Cruiser, conveying that it had redesigned the model and not pasted a Toyota badge to a Maruti Vitara Brezza. The teaser shows the tweaked the grille of the car; the horizontal slats replace the Brezza’s chrome bar design. However, the wheel design would look familiar to Brezza owners.

Toyota Kirloskar Motor has confirmed that the Toyota Urban Cruiser would feature distinct design cues to give it a somewhat unique identity from the donor model. The teaser images (which we’ve enhanced) show the sub-compact SUV with new headlamps (the DRL is placed on the headlamp brow), boomerang type cutouts for the fog lamps with ribbed plastic enclosures, an ‘extended’ bumper and wider intake with scuff plates.

Naveen Soni, Senior Vice President, Sales and Services, TKM, has said that the company expects to welcome many first customers to the brand with the Urban Cruiser.

The first car from the partnership, Toyota Glanza, has been well received by customers and the company had sold over 25,000 units in the first year. Unlike the Glanza which didn’t see significant visual changes from the Maruti Suzuki Baleno, the Urban Cruiser features changes to the plastic parts such as the lights, grille and bumper. The interior could come in a lighter shade with special graphics for a more unique feel.

There won’t be changes to the power or torque outputs, and the K15B engine will continue to make 77 kW of power and 138 Nm of torque. Understandably the availability of the manual transmission with the hybrid system will result in better fuel economy figures than the current 17.03 km/litre whereas the automatic transmission variants will continue to offer the same mileage of 18.76 km/litre. The SHVS adds functions such as idle start-stop, torque assist and brake energy regeneration to provide better acceleration and lower fuel efficiency. There is no plan for a Toyota Urban Cruiser diesel version.

TKM says that the Toyota Urban Cruiser features a two-slat wedge cut radiator grille and trapezoidal front fog lamp housings. These parts are reminiscent of the Toyota Fortuner mid-size SUV. Other confirmed features include twin-pod LED projector headlamps with LED DRL that doubles as turn indicator, LED fog lamps, rain-sensing wipers, 16-inch diamond-cut alloy wheels and unique brown colour in a dual-tone scheme. According to a leaked brochure image, customers will get to choose from the below nine colours:

According to a leaked internal document, Toyota Urban Cruiser customers will get a choice of three grades, internally called ‘Mid Variant’, ‘High Variant’ and ‘Premium Variant’.

High Variant, the mid-level grade, will differ from the Mid Variant with additional/better features like black alloy wheels, 7-inch touchscreen infotainment system with Apple CarPlay, Android Auto and smartphone-based navigation, steering-mounted Bluetooth controls, cruise control and Dark Brown fabric seats with Honeycomb pattern. There’s no mention of specific exterior colours for this grade, which means that they are no different from the choices in the case of the base grade.

What is the expected price of Toyota Urban Cruiser?

The Toyota Urban Cruiser price, we estimate, would fall in the INR 8.5-10.5 lakh range (ex-showroom).

What are the Toyota Urban Cruiser alternatives?

The Kia Sonet & Nissan Magnite are the upcoming launches you should track if buying a compact SUV.

Toyota is focusing on introducing more crossover-SUV models with hybrid technology globally. It recently unveiled the Corolla Cross intended for Asia, the Harrier for Japan, Venza for the USA, while it will be launching the Yaris Cross in Japan this August, to be released in Europe next year.

Display image is a screenshot of the Toyota Urban Cruiser brochure.