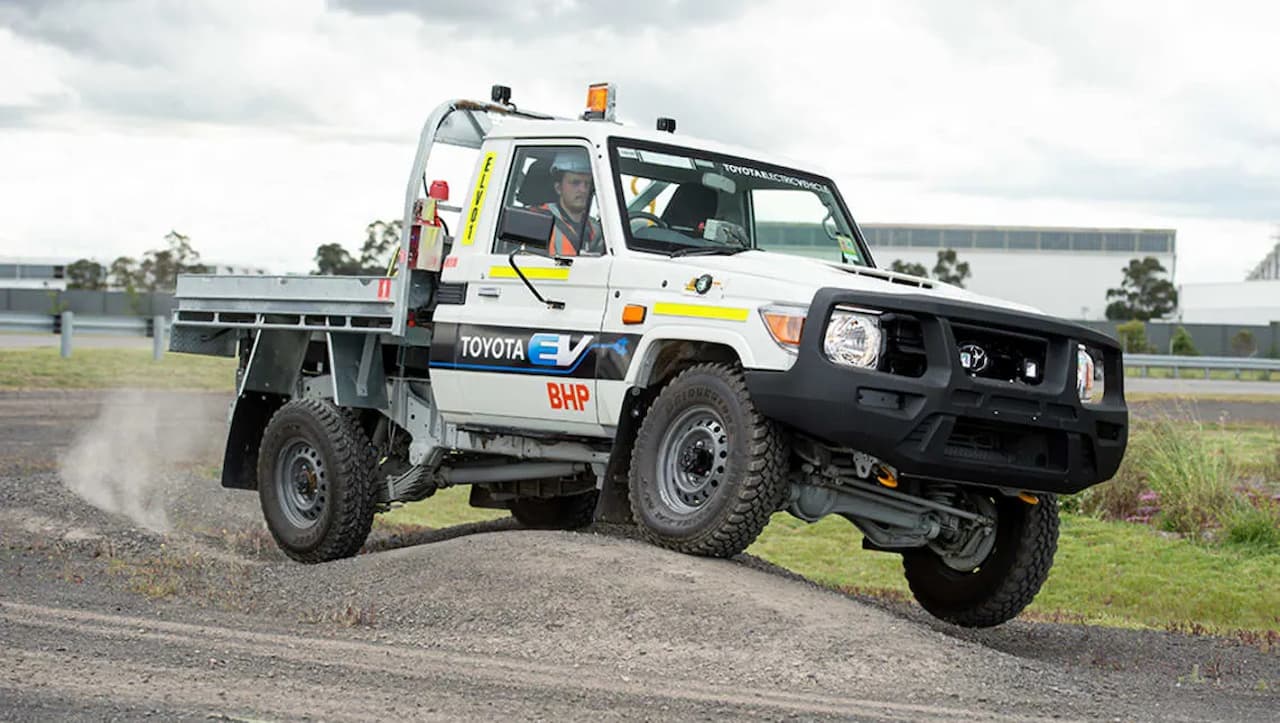 When it comes to off-road SUVs, the Toyota Land Cruiser is synonymous with highly successful iterations like the J80, J100, and J200 series versions. The Land Cruiser received a complete makeover with the all-new J300 series model in June 2021. While the new Land Cruiser comes with traditional fuel-powered engines, there is still no official sign of a fully electric version of the SUV until the end of 2022.

However, there is news coming straight out from Australia for those interested in the idea of an all-electric Toyota Land Cruiser. According to a report by Carsguide in May 2021, Toyota Australia gave a unit of the previous generation J70 series Land Cruiser to a global resources company named BHP based in central Pilbara, Western Australia, which has converted the petrol-driven SUV to an all-electric one. Under this program, BHP has swapped the diesel engine for an electrically driven powertrain with nickel-rich batteries. The details of the electric powertrain used for the job, however, have been kept under wraps.

The project was executed under the supervision of Rod Ferguson, General Manager of Product Planning and Development, Toyota Australia. This one-off fully electric Toyota Land Cruiser is being used by BHP Nickel West mining site in Western Australia. While Toyota has worked on this project with the involvement of a third party, a full-fledged arrival of an all-electric Land Cruiser is still not confirmed. However, this project can be at least perceived as a positive sign for more purpose-built Toyota EVs.

Reducing our reliance on diesel at our operations will help achieve our medium-term target of reducing operational emissions by 30 per cent by 2030.

On the hybrid version of new-gen J300 Toyota Land Cruiser

As per Japanese media reports, Toyota will introduce electrification in the all-new Land Cruiser with a hybrid powertrain in 2023. A hybrid-electric Land Cruiser was also hinted at by Sean Hanley, Vice President – Sales and Marketing, Toyota Australia, during the Shanghai Auto Show in April 2021. As per Hanley, Toyota is studying the possibility of developing a powertrain mix by including some sort of electrification to its whole range, except the performance-oriented models. Considering that Land Cruiser is a popular model in the Australian market, this can be seen as a welcoming sign for its hybrid version.

For the hybrid version of the Land Cruiser, Toyota might use the existing 3.5-litre V6 petrol engine from the new J300 series model as the mainstay. However, it is to be noted that with a kerb weight of almost 2 tonnes, the new Toyota Land Cruiser is already a heavy vehicle, and the inclusion of a conventional hybrid powertrain would have to take into effect many factors. It is here that the possibility of an economical and lightweight mild-hybrid system or a single-motor hybrid system comes into play.