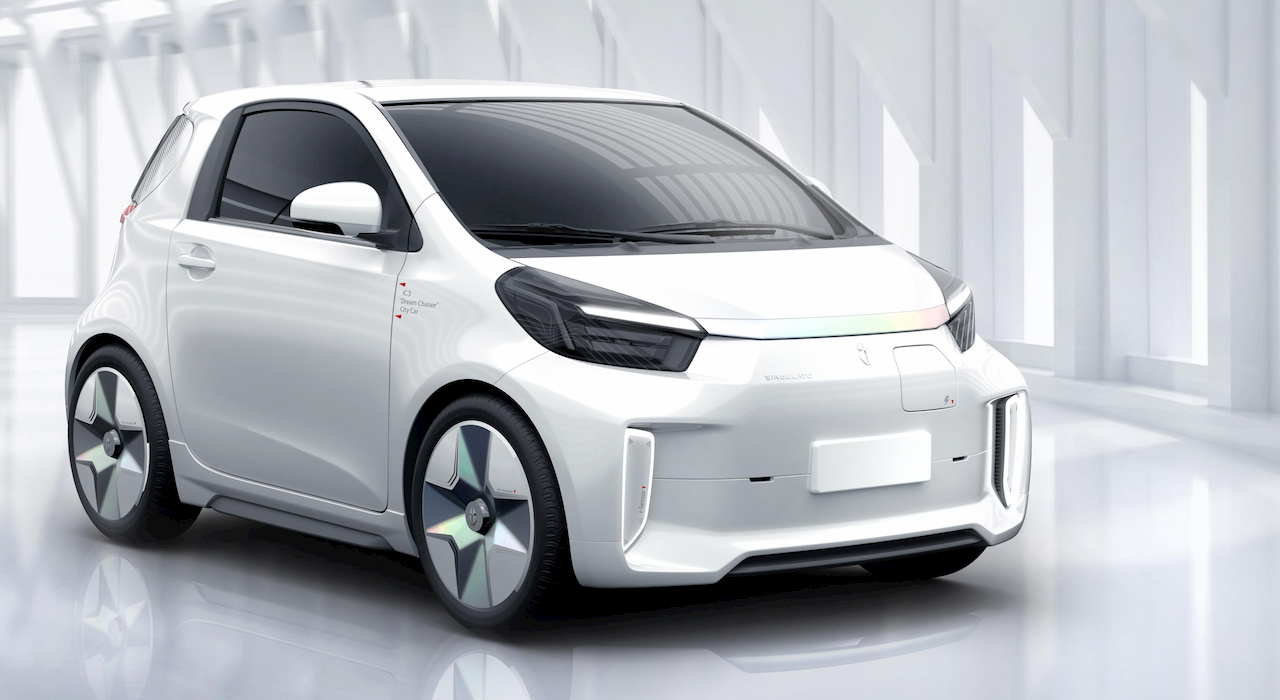 If you think that the Toyota iQ is happily retired, you couldn’t be more wrong. After its run as the eQ, the Aston Martin Cygnet and the Scion iQ, the mini-car is back in its fourth reincarnation – introducing the Singulauto iC3 electric car.

Singulauto, a Chinese new energy vehicle startup, has licensed the eQ platform from Toyota for production in China. While retaining the basic design it has overhauled the car in other respects. The iC3, which was unveiled last year in China, measures 3,600 mm in length, 1,680 mm in width, 1,480 in height and has a wheelbase of 2,000 mm. Unlike the eQ’s feeble 12 kWh battery and 80 km range, the iC3 has a bigger battery pack that promises a range of over 300 km. Apart from the frame, components like the suspension, brakes and steering are also said to be sourced from Toyota. Inside, the dashboard looks modern with a digital instrument cluster placed in upper tier of the dashboard. There’s a big touchscreen infotainment display below to take away all physical buttons.

We’ve come across a few reports on the Chinese media that the iC3 will be launched in the first half of 2021 with production set to start in early 2021.

Toyota Kirloskar Motor has conducted a showcase of Toyota’s alternative fuel vehicles, the hydrogen-powered Mirai, the Camry Hybrid & Aqua Hybrid and the electric eQ at an event in Delhi. Note that Toyota has presented the earlier generation Mirai and the vehicles showcased (except the Camry Hybrid) are not in the product plan of the company for the moment.

The most interesting display is the Toyota eQ which was made in limited numbers for the Japanese market. Unveiled in later 2012, the eQ did not enter mass-production.

The tiny Toyota electric car, based on the gas-powered Toyota iQ, comes with a 12 kWh lithium-ion battery which powers an electric motor that generates 64 hp and 163 Nm of torque. The top speed of the eQ is limited to 125 km/h and the vehicle can go 100 km on a single charge, with the depleted batteries taking anywhere between three to eight hours to charge fully.

Having sold 14 million units of EV, we have achieved a CO2 Emission Reduction of 113 million tons globally. As one of the world’s leading car manufacturers, we take seriously our responsibility to help protect the environment. That means creating vehicles which have as little impact as possible on the natural world around us. It is not just a matter how they perform when they are driven on the road; we believe it is just as important to find cleaner, sustainable ways of making vehicles and disposing of them when they reach the end of their useful life.

Toyota’s first electric car for India is defined – a variant of the Maruti Wagon R Electric that should launch in 2021 in the biggest metros of India and places where there are public plug points for charging vehicles. The eQ from 2012 is based on the Toyota iQ which was never designed for India (a car without rear doors is bound to fail) and was conceived then as a technology or capability showcase.