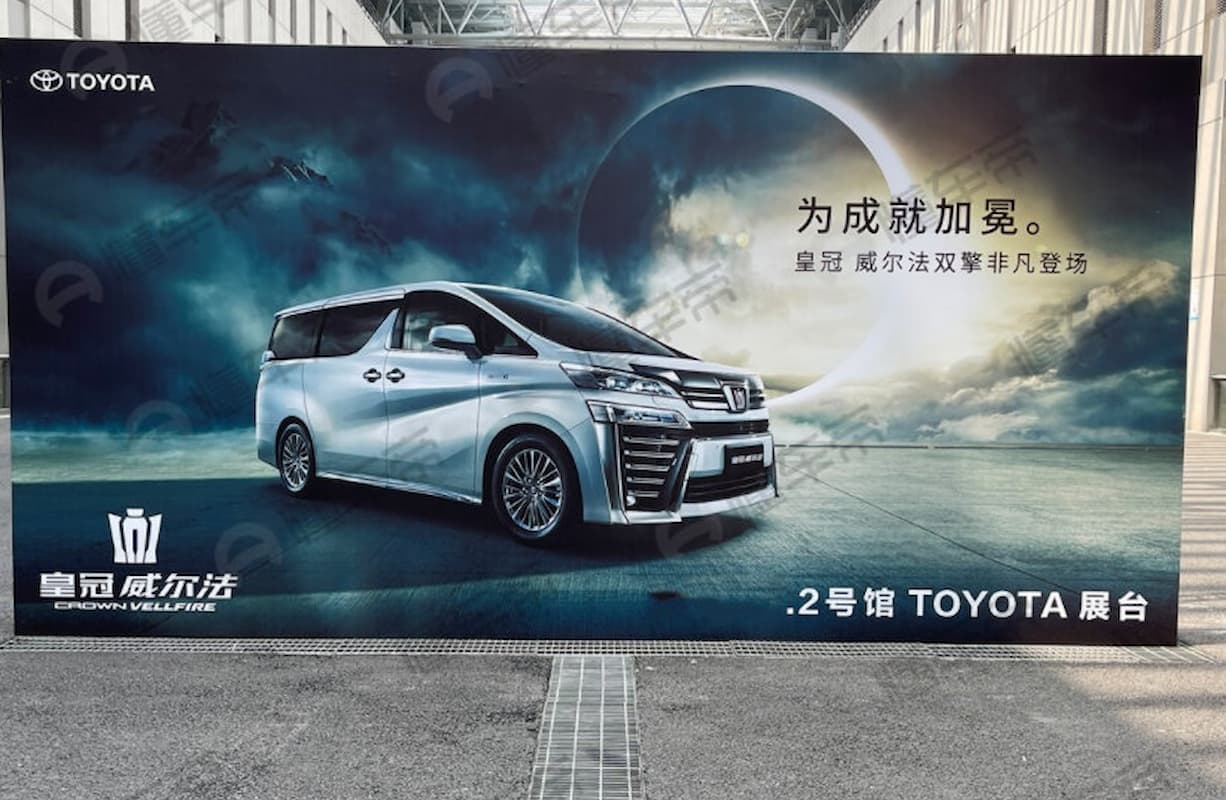 The Toyota Crown Kluger is not the only surprise debut this year at Auto Shanghai, which opens on April 19, as a Toyota Crown Vellfire has confirmed its attendance through a leak. These images, snapped by Twitter user ‘vivatri‘ show posters of the Crown Vellfire at the event venue.

On the outside, the major difference is a jazzed-up front with the ‘Crown’ logo taking over from the Toyota badge. Interior changes should be evident when the luxury van is unveiled in the coming days, but expect a highly luxurious feel with premium appointments. A ‘Hybrid’ badge is also seen on the fender, confirming Toyota’s 2.5-liter hybrid unit under the bonnet.

The Vellfire hybrid is already sold in China under the FAW-Toyota joint venture, and the Crown Vellfire will go on sale from the same partner. The powertrain will be a replica of the Vellfire Hybrid which uses a 2.5-liter inline four-cylinder DOHC 16 valve VVT-i combined with two electric motors. The motor on the front axle outputs 105 kW (140 hp) and 270 Nm of torque which is 50 kW (67 hp) and 139 Nm for the rear motor. The combined system output is 120 kW (160 hp) with a top speed of 152 km/h. Toyota’s e-CVT is a standard fitment on all variants of the Vellfire.

The standard Vellfire measures 4,975 mm in length, 1,850 mm in width, and 1,945 mm in height with a wheelbase of 3,000 mm, and the Toyota Crown Vellfire should hardly be any different (save for a few mm owing to slightly different bumpers).

According to an earlier report, the Vellfire nameplate is getting the axe in Toyota’s home market. The Alphard (next-gen model expected by the middle of 2022) will integrate the Vellfire as new variants with different styling next year, Japanese media reported. Globally though, the Vellfire name is set to thrive. In China, especially, the FAW-Toyota JV will look to add more models with the ‘Crown’ nameplate, which will be the top-end variants of their respective models commanding a price premium. The JV hopes to make Crown a sub-brand with this distinction and give it a premium positioning over its rivals.

Update: The current-gen Toyota Alphard and Toyota Vellfire have received a small refresh for MY2021. All details inside a new section at the end of the story.

Thailand, Australia & New Zealand could be among the first markets where the Toyota Fortuner Hybrid is launched.