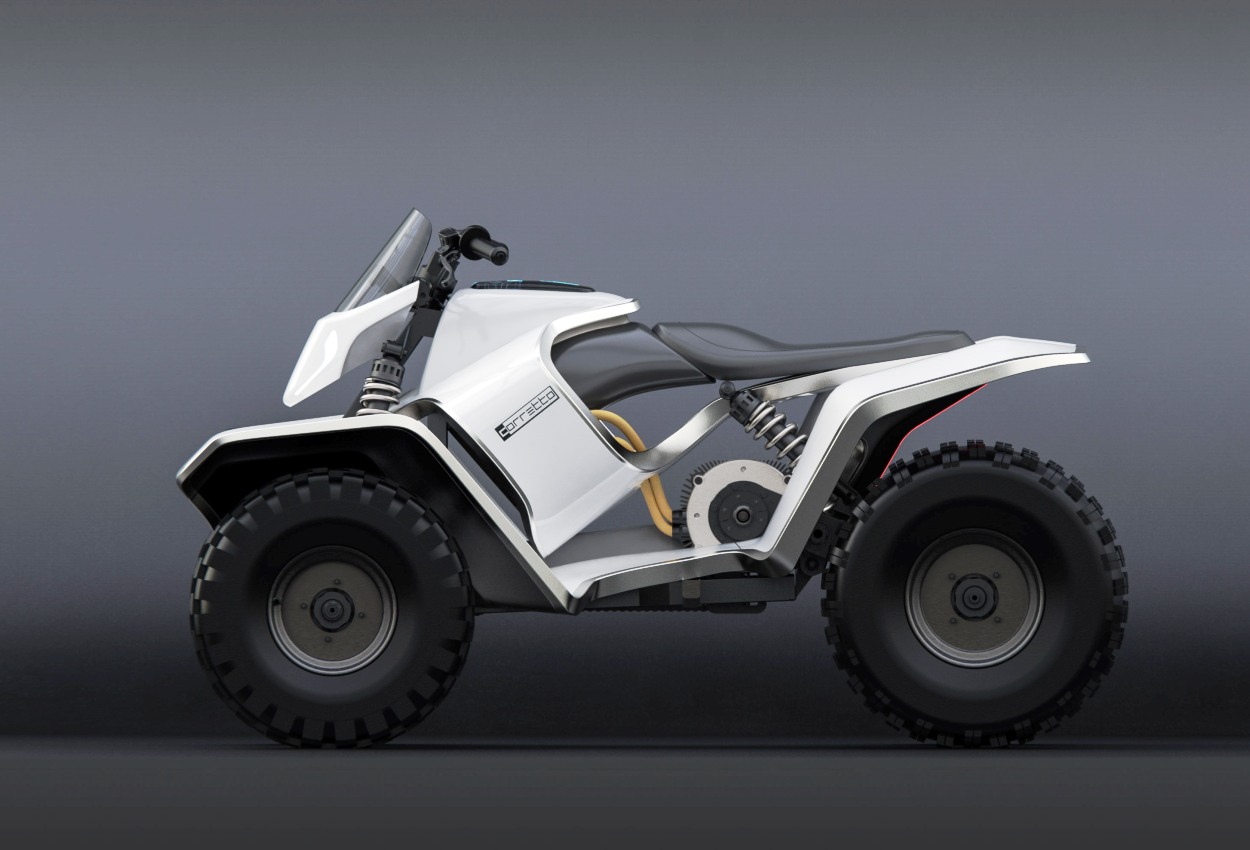 Auckland-based 28-year old product designer Max Betteridge who is passionate about building motorcycles has digitally designed an electric ATV, the Corretto. ElectricVehicleWeb reached out to Max to learn more about the Tesla Cyberquad-inspired recreational vehicle and if he thinks it could actually compete in the market.

Inspiration for the project

Corretto (the name borrowed from the coffee drink: Caffè corretto), is an exploration in form. Tesla’s Cyberquad release showed the world just how far traditional ATV design could be pushed; that inspired me to see how far I could push the traditional design in my own direction. I don’t have a transportation design background and am not a designer per se. I trained as a product development engineer and motorcycle design is a hobby for me. I try to use my background to my advantage – designing the motorcycle way I would design a consumer product.

My design philosophy was to use a minimal, modern approach – creating form by bending and wrapping simple surfaces to create a sense of lightness and flow. Where traditional designers might use hip-lines and creases to accentuate form, I try to use simple floating surfaces to create form instead. I use the edges of the surfaces and the space between the surfaces to create visual interest. This approach is partly due to personal preference, and partly due to my CAD modelling ability! I’ve never learnt A-class surfacing which is used in automotive design, so I’m forced to work with the tools and knowledge I have.

The challenge in designing this ATV was the balance between bulky and sleek. ATV’s are much larger than motorcycles and it is important not to compromise ergonomics or functionality. Creating visual weight at the front of the bike and lightness at the rear of the bike is a trick I borrowed from my 2-wheel motorcycle designs which seems to lend itself well to the Corretto. Another design element I brought over from my 2-wheel designs in the front fairing – a modern take on the classic cafe-racer bikini fairings which seems to give the Corretto some personality and familiarity.

This design is just a visual concept. I have tried to accommodate a large battery up-front and based the design around a relatively standard wheelbase and running gear to make it as easy as possible to use standard OEM componentry.

The question is – if it were for sale, would anyone even want to buy it? When people buy ATV’s they want a rugged utility vehicle. The Corretto doesn’t really fit into the existing market at all! But at the end of the day, that’s the whole point, right? EV’s are a paradigm shift from traditional ICE vehicles. It’s our job as designers to seize this opportunity and really challenge the norms and, if we’re lucky, we might stumble onto an entirely new market segment.