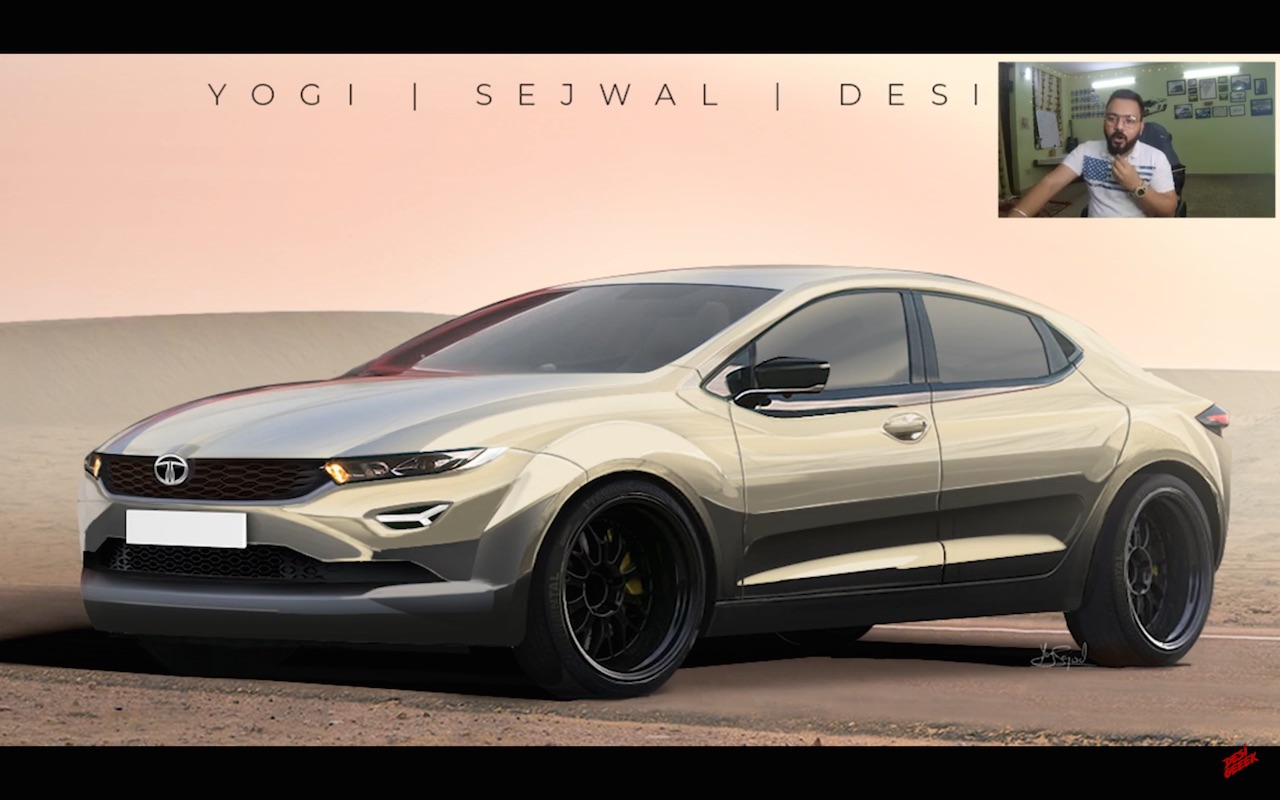 N Chandrasekaran, Chairman of Tata Sons, at the launch of the company’s first electric SUV, Tata Nexon EV, confirmed that Tata Motors will introduce four new electric cars by 2022. The models confirmed include a sedan, a hatchback and two SUVs. While the hatchback and the two SUVs have been accounted for, the sedan remained a mystery.

The company has now started developing a mid-size sedan that would challenge the Honda City, Maruti Ciaz and the Hyundai Verna. Rendering artist Sejwal Yogi has presented his take on the vehicle through a sketch on his Instagram account.

TATA’s new sedan is coming soon and it will rock the car market and here I create a look-alike design, and the design is similar to tata’s altroz and you can watch the making on my youtube channel ( LINK IN BIO ). LIKE | SHARE | COMMENT AND SUBSCRIBE #tatamotors #tataaltroz #tata #sedan #cars #carnews #ysd #yogisejwaldesign #cardetailing #concept #rendering #photoshop @tatamotorsgroup

The sedan could be a spiritual successor to the Tata Manza that was discontinued upon the arrival of the Tata Zest in 2014. It was speculated that the project, codenamed Tata X452 or Tata Peregrin, was in the backburner after demand for the mid-size sedans came under pressure from SUVs like the Hyundai Creta, Kia Seltos, Mahindra XUV500 and the Ford EcoSport. The level-higher D-segment, which once thrived with saloon cars from all parts of the world, viewed as a segment to build brand reputation, is tottering on the brink of extinction thanks to the dominance of the SUV, with Volkswagen, Chevrolet, Toyota and Renault exiting the space.

Tata Motors is keen to fill out white spaces in its portfolio to widen its presence in the playing field of the world’s fourth largest car market, and cement its place as the No.3 player behind Maruti and Hyundai. For 2020, they have lined up the Tata HBX for the micro-SUV segment (taking on the Maruti Ignis and the Mahindra KUV100) and the Tata Gravitas for the seven-seater SUV segment in the INR 20 lakh price segment. Two vehicle types that they don’t sell are an MPV and a proper sedan (Tata Tigor can be excused here as it is a sub-4-meter product with fastback styling) and that could change soon.

The new electric sedan will ride on the ALFA platform and could be an extension of the Altroz with design elements inspired by the HBX and Sierra Electric concept that carried special air curtains, lighting tech and grille. The new C-segment sedan will bear elements from the evolution of the IMPACT 2.0 design language and a spacious cabin and is expected to be complemented by petrol, diesel and electric powertrains.

The Ziptron EV technology that powers the Nexon EV, which will be fitted to the Altroz EV, would power the new sedan. The 30.2 kWh battery offers a range of 312 km in the Nexon EV and can be charged to its full capacity in just 60 minutes with a DC fast charger. Expect an improved range in the sedan while features such as the 8-year/1.6 lakh km warranty on the battery and motor, an improved version of the ZConnect connected car features to be developed with Tata Elxsi, electric parking brake and the ‘flat floor effect’ to be retained.

Tata will be probably be the only brand to offer an electric sedan in that segment when the X452 EV is launched. Mahindra and Ford’s electric sedan is expected to touchdown in FY22, but may be in a smaller size class.