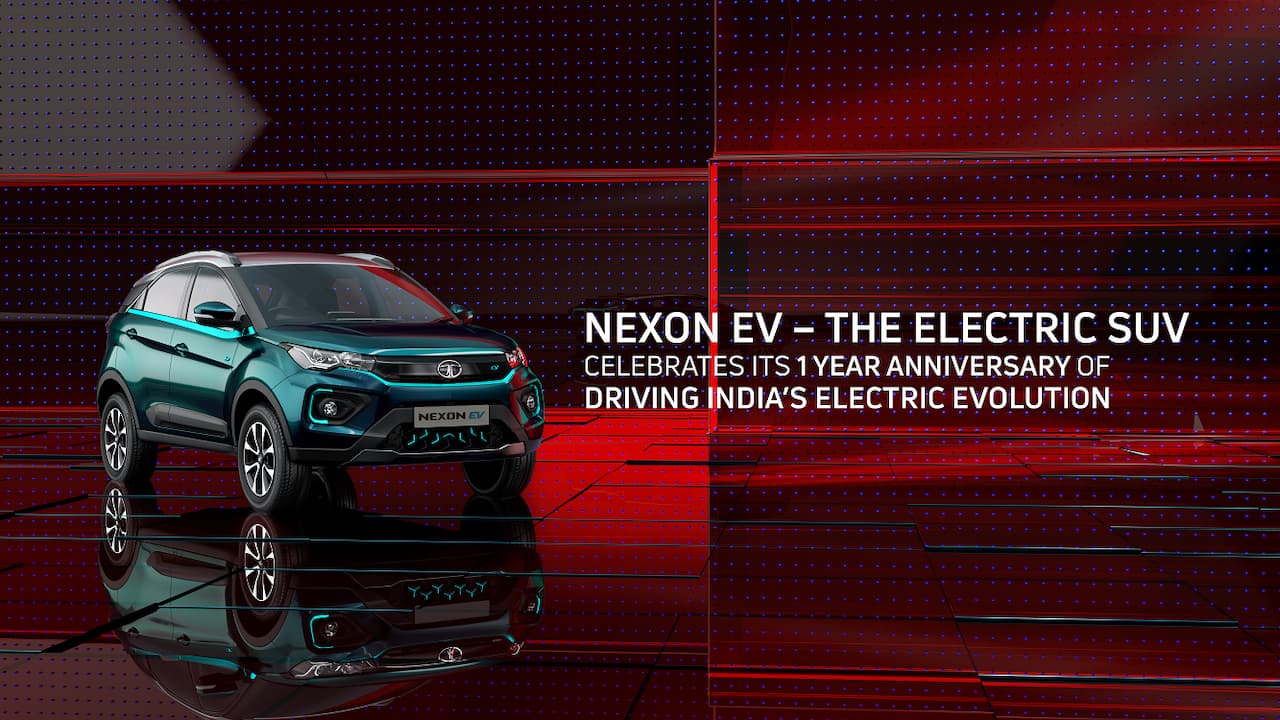 The Tata Nexon EV completed one year on the market yesterday and Tata Motors announced that cumulative sales of the Tata electric car is close to 3,000 units. The Tata Nexon EV dominates India’s electric car segment with a 64% market share. Meanwhile, Tata Power has scaled up the number of charging stations that have a CCS2 fast-charger to more than 300. It plans to increase that count to 700 by March, preparing a runway for the Nexon EV’s expansion.

A few days ago, Tata Motors introduced a special exchange discount of up to INR 15,000 on the Tata Nexon EV to celebrate its first anniversary. It retails the electric SUV in XM, XZ, and XZ+ trims, at INR 13.99 lakh, INR 15.25 lakh, and INR 16.25 lakh, respectively (ex-showroom prices).

Tata Motors isn’t providing direct discounts on the Nexon EV, but it’s able to sell in big numbers compared to other electric cars in India. The company started delivering it in March 2020, and by the year-end, it had sold 2,602 units, which is an impressive feat given the tumultuous nature of 2020. Now, we officially know that almost 3,000 units are plying on the roads.

December was the Tata Nexon EV’s best month in sales performance, as 418 units of the total 2,602 were delivered that month. Tata Motors has confirmed that Q4 2020 (October-December 2020) was the best quarter for its flagship EV, with 1,253 units – more than half the total units during the whole year – delivered during the period.

The Tata Nexon EV has no direct rivals, and closest competitors are the MG ZS EV and the Hyundai Kona Electric. The imports pack better powertrains, and so, are way costlier. The Chinese-made model starts at INR 20,88,000 (ex-showroom), while the South Korean model’s base configuration is priced at INR 23,75,900 (ex-showroom). The first ‘local’ challenger to the Nexon EV is the Mahindra eXUV300 that is set to launch within 12 months.

Sales of the MG ZS EV and the Hyundai Kona Electric improved following the impasse in April. In September, government body EESL announced that it would procure 150 units of the Tata Nexon EV and 100 units of the Hyundai Kona Electric. Looking at the monthly sales, the announcement was a big one for the first Hyundai electric car in India. EESL said that it would buy the Indian model in its mid-range XZ+ trim and the South Korean model in its entry-level Premium trim, at a per-unit price of INR 14.86 lakh and INR 21.36 lakh respectively.

The Tata Nexon EV is way ahead of the bigger electric SUVs. The Hyundai EV’s sales in 2020 are likely to be well under 500 units. A high price, plus the model being plagued with issues like fire risk and breakdowns, would have a negative impact on its performance in the market. The MG EV witnessed sales of 1,243 units last year, which is about half that of the Tata Nexon EV’s count.

Tata Motors attributes the growing demand on the back of improved awareness, widening charging infrastructure, new government incentives and subsidies, the role of the media in breaking myths around EVs, and most importantly, the cost benefits.

The announcement of Tata Nexon EV subscription plans in August, followed by the reductions of monthly subscription prices in September and December, makes the car appealing to a new class of customers. These subscription plans are available in five cities right now: Bengaluru, Pune, Mumbai, Delhi-NCR and Hyderabad. The full restoration of the electric car’s supply chain following the pandemic and the festive season rush augured well for Tata Motors’ long-range electric vehicle.

The Tata Tigor EV, the other Tata electric car on sale in India today, is performing quite miserably in the market. Tata Motors had managed to deliver about 100 units by Q3 2020, and that could be attributed to the slump in the shared mobility segment. The refreshed Tigor EV that is to come out shortly could sell better, but that depends on the recovery of the cab segment. As for the Mahindra eVerito, the nation is clearly uninterested. The Mahindra eKUV100 launch this quarter at a mouth-watering price of Rs 8.25 lakh (ex-showroom Delhi, incl. FAME-II subsidy) could raise monthly EV sales of India to the 1,000-unit level on a consistent basis.

Later this year watch out for the launch of the Tata Altroz EV. With prices lower than those of the Tata Nexon EV, it should significantly boost the EV sales of Tata Motors.