Yet another ElectricVehicleWeb.in reader has come up to share his EV ownership experience. This time, it’s Ram Mallya from Belgaum, Karnataka with a new Tata Nexon EV. Mallya’s new electric car is one month old and he has driven it 1,500 km. Below is his first-month ownership experience in his own words:

Note 1: Tata Z Connect App calculated between 28th August to 27th September and missed 14 km driven on 27th Aug. I have charged the car 9 times in the first month, considering recharge every time when
the battery remaining is 10%. It is approximately 8 and a half full charging cycles. So, let’s do the math.

Note 2: The 1,500 km drive was 90% in the city and 10% on the highway, with the AC on during 70% of the drive and a minimum occupancy of 2 people in the car most of the time. I have also driven several times in Sport mode on highways to enjoy the superb acceleration of the car; it provides 60% more peak torque than the Drive mode but eats up the battery quickly. As it was a new car and new electric experience, I had a lot of my friends who came down to check the car and test it in the city on Drive mode and Sport mode, so it was used by multiple people.

My verdict on the economy is that even after all driving conditions I am pretty impressed with the result, that is INR 1.22/km – far lower against my Jeep Compass diesel which is approximately INR 7/km.

I am a member of a WhatsApp group of Nexon EV owners where I have seen criticism due to the low range against claimed 312 km in one charge by Tata under test conditions. I would appreciate if Tata Engineers can get the feedback of all the vehicles and try to tweak the software for the power management to improve upon the practical range of the vehicle beyond 200 km in all conditions.

Frankly speaking, I am pretty happy with the existing range as I have bought this car only for the city use and as a second car in the garage and me being in a smaller town, we do not have range anxiety as the people in the metros have due to longer travel distances.

2) Build quality of the car:

With all the excitement of the electricity-powered vehicle and the amazing acceleration on Sport mode, the build quality and suspension is very good for the segment. I was pretty impressed with the build quality and the suspension even in the worst of the roads it was pretty stiff without too much roll. (I also own a Jeep Compass SUV which can be compared to the similar suspension). Its claimed heavier (by 95 kg) than the diesel variant due to the battery pack and it does handle pretty well within the max speed of 120 km/h. With the amazing 220 mm ground clearance, it’s a go-anywhere car considering the Indian road conditions.

People who hold on to the old misconceptions of Tata cars bring cheap and think they have a bad interior finish should definitely check out this vehicle as it will immediately change their opinion. Tata Nexon EV is one of the best jobs the Tata engineers have delivered since they entered the passenger car market. One of my friends who drove this car said the steering feels like a BMW when you drive.

4) The power of silence:

The advantage of the electric being very silent (except the AC blower and the tyre noise) has its own advantages. For me, being a wildlife photographer, it’s a boon to have such a silent car as I generally shoot wildlife (through my camera) from the car; the car works like a natural hide. I can move the car forward/reverse without the self-start cranking noise to adjust my photographic composition, as generally, the shy birds fly off as soon as you crank up the engine to move the car in an ICE. I generally take my family on an outing on weekends and it’s a pleasure cruising through the woods without any noise!

I would not recommend this car for those who would be using it as the first and only car as at this stage the network of the fast chargers is not available all over India. You cannot use this car in case of an emergency if the battery is drained.

I have seen people criticizing Tata Motor for the range and the initial issues of the fast charger network in India against their hard-earned money they have invested in the car. To such people, I gave an example of how the ICE engines were developed in the early 1900s and when people purchased the cars, they still considered the good old horse-driven carts as their primary vehicles of transport until the ICE technology became dependable and affordable. One can also consider their purchase as a support for the development of the new technology from an Indian company that is coming at an affordable cost, which will also be eventually developed and stabilized like popular ICE vehicles.

6) Conclusion after 1500 km and one month of ownership:

As of today I haven’t faced issue with the vehicle and I am pretty happy every time I’m behind the wheel. The minor glitch is that the vehicle delivers very low power when the battery drops below 10% and if you want to drive up a steep road it is an issue. 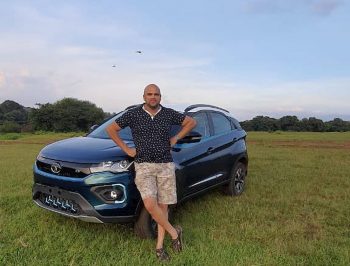 EVW reader Ram from Belgaum has shared his initial ownership review of his Tata Nexon EV. Read on to know it all. 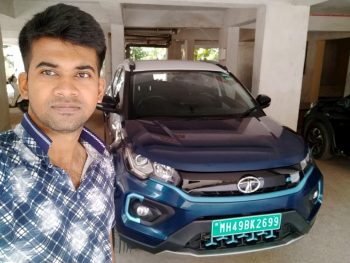 In a recent trip with two of his friends, Nirvik managed 256.7 km distance with 6 percent charge remaining. Here’s Nirvik’s story: