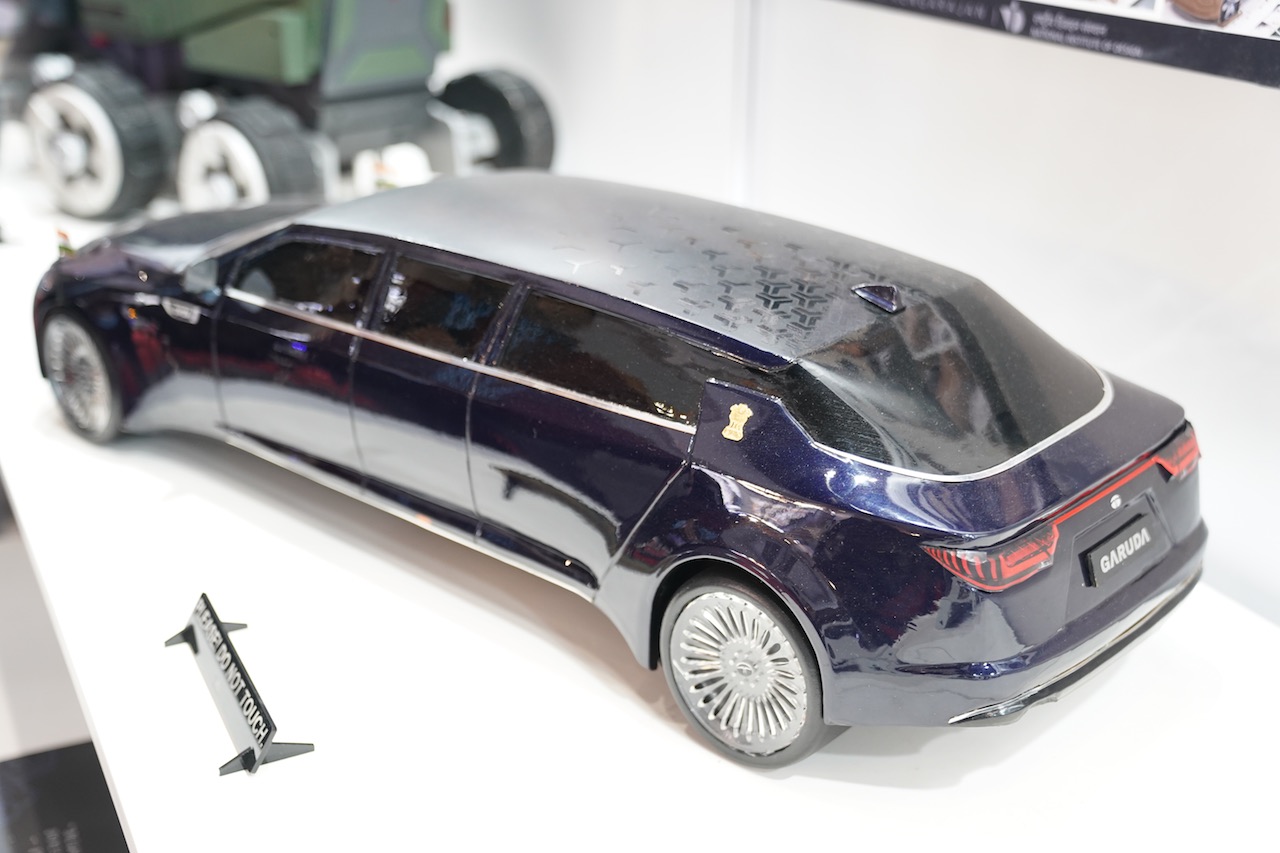 Students from the National Institute of Design, Gujarat, displayed a scale model of Tata Garuda Presidential Limousine, proposing a stylish, comfortable and sustainable ride for the Indian President.

Kunal Kashyap, 2nd-year student, Transportation and Automobile Design, National Institute of Design, Gujarat, designed the car as part of a project. The Tata Garuda Presidential Limousine features a split headlamp design with sharp-looking LED daytime running lights above and LED headlamps below. At the rear, LED taillights stretch along the width of the car and there’s chrome line that goes around the window and rear windscreen.

What is the objective to design a presidential limousine?

Kunal: I realize a lot of presidential limousines like The Beast of US President Donald Trump, Aurus for Russian President Vladimir Putin and Hongqi of the Chinese President, all from their own country. So why not an India’s own indigenously made presidential car for our country’s first citizen?

I wanted to break the regular stereotype that people globally have of India like India’s a country of snake charmers or a poor country. So here you can see a clean, luxury vehicle with a sophisticated paint job. The vehicle has a Colour Material Finish design that comes with a transparent wood and tri arrow signature pattern that has been patented by Tata Motors.

Can you tell us more about the thought process behind designing the vehicle?

Kunal: If I had gone with something like retro-classic styling, it wouldn’t have appealed to the young masses of Indian population. So, I had to choose a design that is much more modern. I had options to do either Mahindra or Tata. Tata has the Impact 2.0 design language that we have seen in the recent years and it talks about much more modern and global design. It’s a company that is indigenous to India but the design is quite global.

To have that kind of exterior styling, I have chosen the elements that go into the 2.0 design. One is the ‘Slingshot’ line. If you could see the side view, right below the belt line there’s a sharp crease that moves from the front bonnet and wraps around entire back of the vehicle. When you talk about the front end of the vehicle, you could see slim DRLs on the top split headlamps in the middle section and a hockey stick line at the bottom. If you take the Harrier, the vehicle that was recently launched by Tata, you see that they have shifted the position of the headlamps. They are not using a conventional design and it’s a very modern approach to designing a car.

So what is a ‘Hockey Stick’ line? They are kind of arcs, placed at an angle which point towards the wheel arches. You could see this kind of design language in the new Tiago, Tigor and the Altroz. Then of course the ‘Humanity’ line. It’s the grille shape of Tata that is there. And the newest they have incorporated is the tri-arrow pattern, which is the combination of passenger vehicles, commercial vehicles and military vehicles, the three segments that they are dealing with. These are on the exterior of the vehicle.

Now, if I talk about the interiors – we had to do some trend mapping first – like what is the future trend in a vehicle. Being a presidential vehicle, it had to have all the safety norms and safety standards. I had to have a modern luxury touch to it. When I dealt with that, I realized that having materials such as leather would not be very indigenous to India. So what is the material that is indigenous to India and represents luxury? The immediate answer was silk. We have seen a lot of traditional clothing or ethnic wear that we use for weddings or ceremonial purposes and we generally use silk. I went with Tasar Tasar silk and I used a combination of technology with it, which is hydrophobic silk. The silk actually has a stronger pattern and you can wash it too. It won’t shrink when it comes in contact with water.

Then there is transparent wood, another luxury material that I came across that I have predominantly seen in all vehicles like Rolls-Royce. But there’s a limitation on what kind of wood you use and there’s only like one kind of wood that’s always used in a vehicle. You don’t use three types of wood in one vehicle. So, with the transparent wood what you do is you remove the lignin of the wood. Lignin is the property that gives the wood its characteristic brown or reddish brown colour. If you remove the lignin from the wood, it is going to become transparent. The wood will retain the properties of a normal wood but it would actually become stronger by four times more. And if it’s transparent, you could use it for ambient lighting behind this transparent wood. You can see the veneers of the wood while you can change the colours. That is the whole concept.

The interiors is split. The front section or the front cab will seat the driver and security personnel while the rear passenger cabin is designed in a different way. From the renders of the rear cabin, you can see a lot of beige over there that kind of shows the luxury and opulence while the front section is more functional.

The second project is from Regin Muraleedharan, a 2nd year student of the same university, called the Mahindra Rath. The design of the concept has been taken from temple chariots seen predominantly in South India for processions. It’s a three-seater and has the qualities of a rugged SUV and a luxury SUV put together.