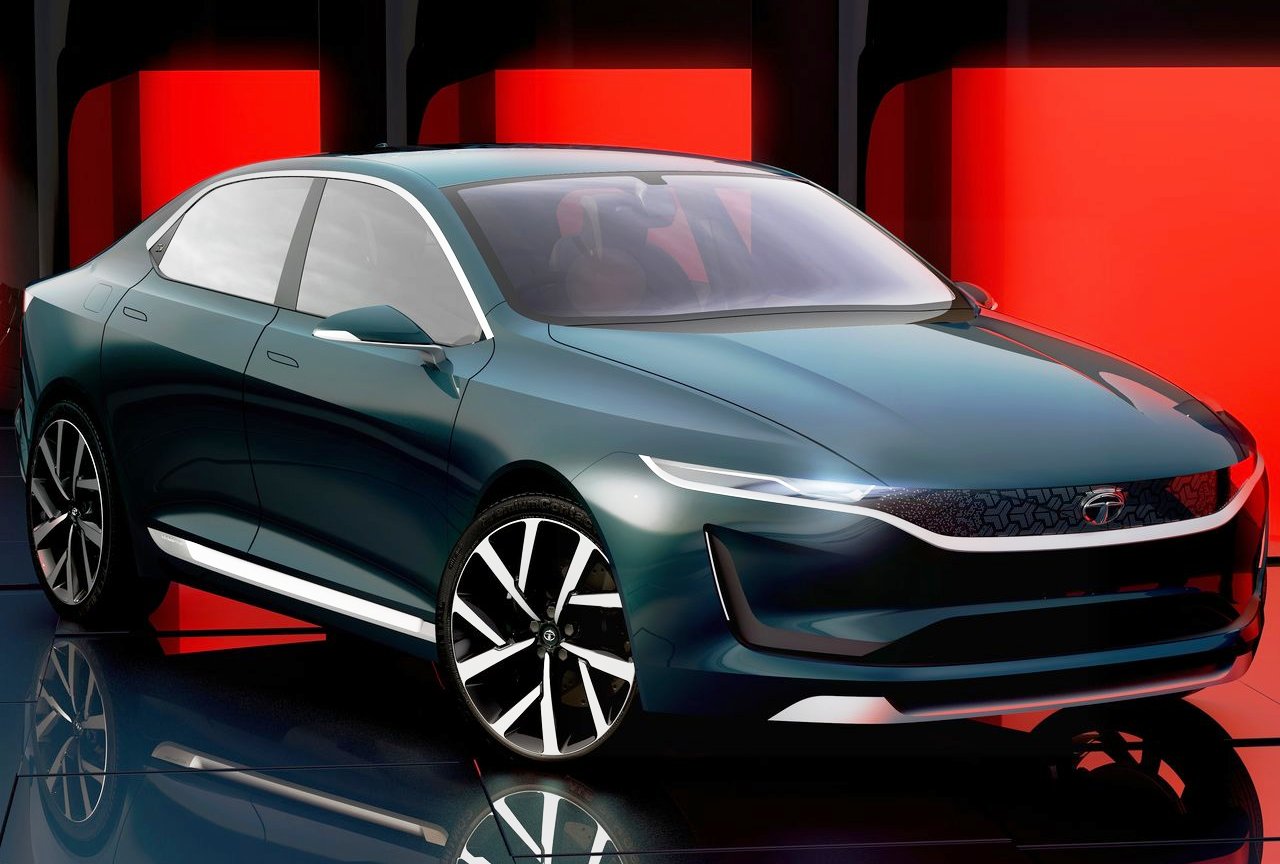 Following its unveil as a concept car at the Geneva Motor Show 2018 (a Concept Car is a study presented by a company showcasing new technologies and design to get reactions of the customers or the public, and isn’t a confirmation of a commercial launch) what we can classify as ‘Tata EVision details’ are spreading like wildfire on social media. Is there any truth to the speculations of its range, technology and price? Let’s find out.

Tata Motors never revealed or even hinted the range of the Tata E-Vision Sedan Concept. To begin with, the vehicle presented at the Swiss show not a working prototype, as we’ll explain later in this article.

It’s being said that the electric sedan has a range of 1,000 km, which is fake. At the moment there is no electric car in the world market that offers a 1,000 km range on a full charge and to achieve such a long travel distance, a massive battery pack and battery management system would be required making it expensive, complicated and an impractical affair.

Apart from the fact that the Tata EVision concept sits on the OMEGA-Arc platform (the same base as the Tata Harrier & Tata Gravitas) which supports full electrification, below are some of the officially revealed specifications of the Concept car:

At 4.77 mm long, 1.85 m wide and 1.42 m tall, the Tata E-Vision is bigger than C-segment sedans Honda Civic, Hyundai Elantra, Toyota Corolla Altis. Even luxury sedans like the Jaguar XE, BMW 3 Series and Audi A4 are not as big!

The video above shows it featuring a battery pack embedded in the floor. There are two electric motors, one on the front axle and one on the rear axle, giving the gentleman’s sedan an all-wheel drive drivetrain layout. We don’t know the output figures or the range of this Tata electric car, though. While the show car is not a working prototype, the headlamps, tail lamps, wheels and many other parts are real.

Tata Motors put a lot of effort into the Tata E-Vision and developing it took almost two years. The company executed the whole project while also designing the Tata 45X and the Tata H5X concepts, which gave the Indian market the Tata Altroz and Tata Harrier, respectively. It created the sedan concept at the Tata Motors European Technical Centre (TMETC) in Coventry, UK.

The team responsible for this concept was working under the radar, making it “sort of an after-hours skunkworks project,” Martin Ulharik, Head of Design, TMETC, told cardesignnews.com in May 2018.

The EVision concept car is designed using Tata’s IMPACT 2.0 design philosophy and gets a three-dimensional ‘Humanity’ line that runs the entire width of the car. At the rear are animated tail lights that are a part of the ‘Slingshot’ line that starts at the logo and goes around the side. The concept car (official video attached above from Auto Comparo Youtube channel) was capable of sprinting from 0 to 100 km/h in under 7 seconds and had a top speed of 200 km/h. Again, note that these are notional specifications as the concept car does not run.

Though the Tata E-Vision is from a studio in Britain, it has Indian influence everywhere you look. Consider the grille, for instance. It features 4,000 aluminium pins that form a tri-arrow ‘jali’ pattern, all hand-placed behind a mask in a two weeks’ time. Depending on the lighting, you’ll see the car featuring blue or green paint, and these colours were selected to represent Peacock, India’s national bird. The colour-shift is reminiscent of a Peacock’s feather, which can show different hues at a microscopic level.

Lastly, special attention has been given to the rear passenger compartment, as the cars of this class are generally chauffeur-driven and the customer typically sits in the back. The designers carefully designed DLO and height of the door aperture to ensure ingress and egress for rear passengers.

The interior is a talking point with an instrument panel that has two selectable digital interfaces. It came with a rear seat package which made them fully adjustable and occupants were surrounded by handcrafted materials and subtle details. The concept car delivered by the team of Tata Motors’ head of design Pratap Bose will be remembered for a long time to come.

Below are some of the features that were demonstrated on the concept vehicle:

When will the Tata eVision be launched?

Tata Motors has confirmed that it does not plan to launch the Tata eVision, and that it is purely a concept study. Any reporting otherwise is fake news.

The fake news banners read that the Tata E-Vision would launch at a price of Rs.25 lakh (ex-showroom). There’s absolutely no truth to this rumour, as Tata Motors CEO Guenter Butschek has ruled that out in an interview with Times of India (TimesOfIndia.indiatimes.com). Though it is technically feasible to build the vehicle, there is no commercial viability to the project considering that the domination of crossovers & SUVs are leading to the slow death of sedans and the demand for sedans in the premium segments has dried up completely.

In the segments beyond Rs.10 lakh, Indian car buyer preference is shifting towards crossovers and SUVs evident by the demand for the Hyundai Creta, Kia Seltos and Mahindra XUV500, that led to the discontinuation of sedans like the Nissan Sunny, Toyota Corolla, Renault Fluence, VW Jetta, Hyundai Sonata, etc. With no plan for launch, the 10-year warranty rumour is flushed down the drain. Currently the Tata vehicle with the highest warranty is the Tata Nexon EV which comes with the 8 year/1.6 lakh km standard warranty, but applicable only for the battery and motor.

According to Butschek, Tata will be looking to launch EVs in the segment below or just above 4 metres, which is the “sweet spot” for EV adoption due to their affordability. It will be models based on the ALFA-Arc platform that will get all-electric variants initially.

While there may not be a direct presence of the Tata eVision on Indian roads, the concept will influence the look of future sedans from Tata Motors. Talking to aforementioned car design website about using the concept’s design in a production Tata sedan in May 2018, Tata Motors Head of Design Pratap Bose had hinted this. Below is what he had said:

You will see elements of it in future cars, in future sedans that we do: they may not be in that size, but it’s a design language donor.

The Tata EVision concept could influence the design of the rumoured Tata Altroz sedan that is reportedly called Tata Peregrin or the next-generation Tata Tigor. The upcoming Tata electric cars currently include the Tata Altroz EV and the Tata HBX EV. The hatchback will go on sale sometime in 2021, and the micro-SUV may follow in mid-2022.

Later this year, Tata Motors showrooms will likely welcome the Tata Tigor EV facelift, with the fresh design and features transferred from the Tigor facelift. The Tata Nexon EV will receive a new grille and crucial software upgrades that enhance the driving experience and increase the range.

After the above launches, we may see the next-gen Tata Tigor EV debuting in late 2022 and a Tata Sierra EV following in 2023. Tata Motors has not confirmed that it will put the Tata Sierra EV Concept into production, but Pratap Bose told EVW this year that he will try to make it happen with every bone in his body.