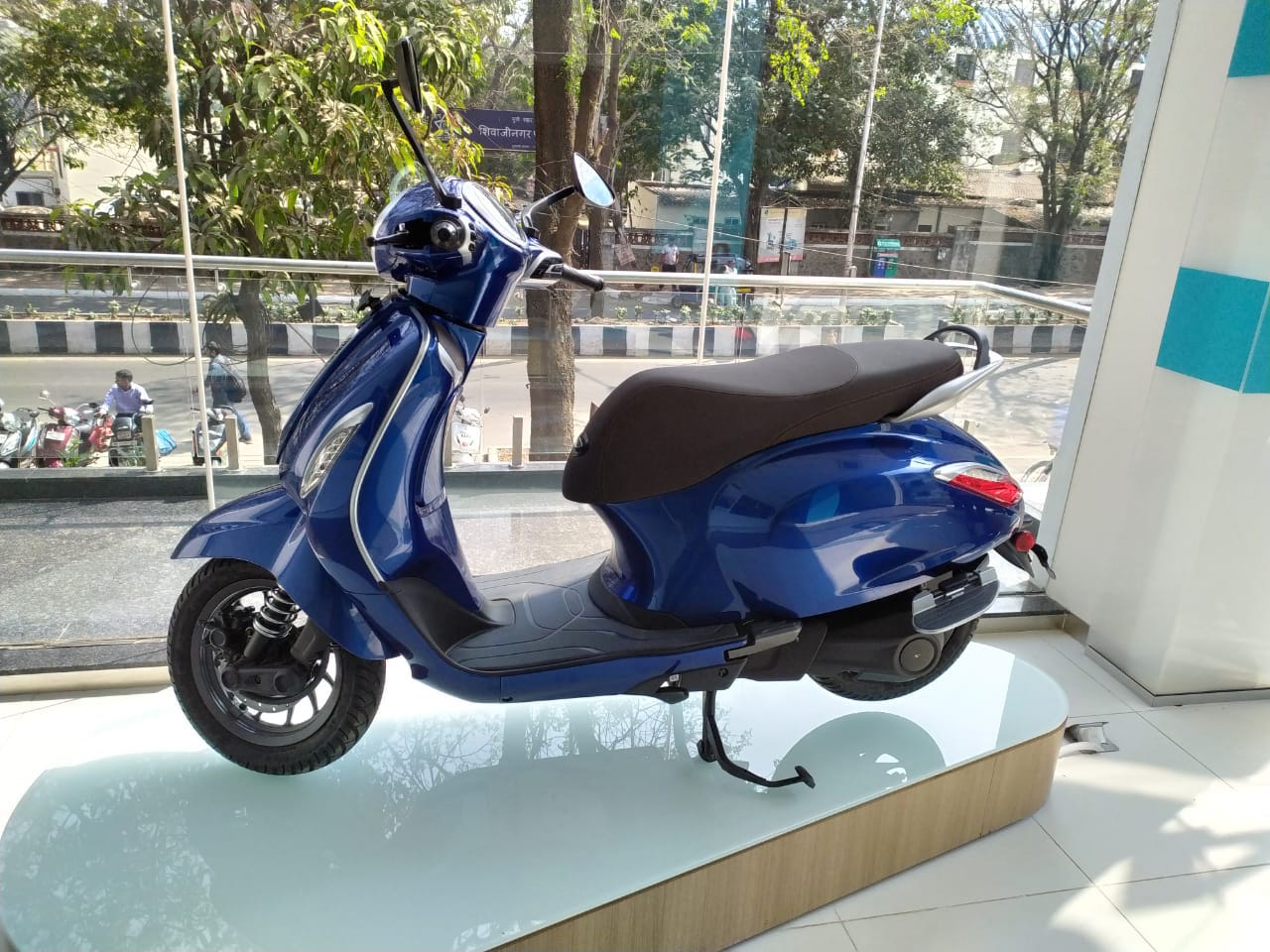 India’s top two-wheeler brands are developing electric vehicles and while some have been vocal about plans, others have said they would need time to make them public. Companies are waiting for the charging infrastructure to improve, battery price to fall further and product teams are studying India and watch how consumers are reacting to existing electric vehicles before firming up plans to accelerate.

In this story we lay out every bit of information that has been reported so far on the electric scooter plans of India’s top two-wheeler brands.

TVS Motor Company whizzed into the electric scooter market with the launch of iQube in January 2020. The iQube is powered by a 3 kWh Li-Ion battery pack wired to an electric motor that puts out 5.9 hp and 140 Nm at the wheel. The TVS iQube offers a range of 75 km in Eco Mode and has a top speed of 78 km/h. TVS has equipped the iQube with SmartXonnect system which can be accessed through an app to view information like battery charge status, range, navigation assist, parked location, geofencing and more.

Other features include reverse park assist, economy and power driving modes, fully digital instrument cluster, front and rear disc brake etc. Priced at Rs 1.15 lakh ex-showroom, the iQube is currently offered in Bangalore. Hardly 200 iQubes have been sold in the country and it is expected that TVS would make an announcement on expansion plans this year

Sudarshan Venu, Joint Managing Director, TVS Motor, had said before the lockdown last year that the company is looking to cover three to four more cities by the year-end with the iQube, but that didn’t happen. Venu also confirmed that TVS plans a portfolio of electric vehicles and has earmarked about Rs 200 crore for their electric vehicle program. The TVS iQube could become available in more cities this year.

Based on the Maestro Edge, the eMaestro Proto has differentiating elements like the blacked-out headlamps and copper brown finish on the wheels, front suspension and motor hub. It features a ride-mode selector in the left handle grip where the modes can be selected by twisting it. Chances are that the Proto has the powertrain of the Ather 450 as Hero MotoCorp is the leading stake holder in Ather Energy.

Expected to be launched later this year, the Hero eMaesto could undercut its rivals with the pricing and make a big splash in the e-scooter segment.

Chetak was brought back to life with the electric version and Bajaj has delivered 1000+ units in Pune and Bangalore. Priced at Rs 1 lakh and Rs 1.15 lakh ex-showroom for its Urbane and Premium variants respectively, Bajaj Chetak gets a 4 kW motor and offers a range of 95 km in Eco mode. Bajaj is planning to inaugurate an exclusive factory for electric vehicles that would make the Chetak. It is planning to launch the scooter in 30 new cities by March 2022.

Bajaj Auto is developing a low-cost electric scooter for Yulu, a shared e-mobility service start-up. The e-scooter, a successor to the Yulu Miracle, is expected to be priced at Rs 35,000 and will be launched in 2022.

Performance versions of the e-scooter are already in testing and Bajaj will be launching Chetak with better acceleration, top speed and added features too. Rakesh Sharma, Executive Director, Bajaj Auto, has already confirmed that the company is working on more Chetak models and the prototypes are in the pipeline. The platform of the Chetak is borrowed by Pierer Mobility’s Husqvarna brand which will come out with its electric scooter in 2022. You can refer to our story on the Husqvarna electric scooter to learn more.

India’s best-selling scooter brand Honda is considering electric scooters for the B2B category. Last year it came to light that the Japanese were to conduct a feasibility study but later it emerged that Honda was not interested in launching electric scooters in the country for personal owners.

In 2019, Suzuki Motorcycle’s VP of Sales, Marketing and After Sales, Devashish Handa confirmed in a media interaction that the Suzuki electric two-wheeler project is already underway. We did a glimpse of what Suzuki was developing when the Suzuki Burgman electric was spotted on test in North India last year. The company could launch the Burgman electric in mid-2021 to rival the likes of Bajaj Chetak and Ather 450 Plus.

Yamaha Motor has a small selection of electric scooters in its global lineup. Like Honda, Yamaha is conducting a feasibility study for electric two-wheelers in India. According to Yasuo Ishihara, Managing Director, Yamaha Motor Research and Development, India, Yamaha won’t bringing EVs before mid-2022. More recently it emerged that the company could bring its electric scooter to the market by the end of 2022.

If it is unfeasible to convert existing products like the Fascino or Ray to electric, the Yamaha EC-05 electric scooter (pictured), which was launched in Taiwan in 2019, looks like a product that can be adapted for India. The EC-05 with its wide seats, upright riding position, range of 110 km and a top speed of 90 km/h, makes it an ideal model when compared to the e-scooters on sale in India.

An electric scooter based on the Peugeot e-Ludix (which is manufactured and exported globally by Mahindra from India) was showcased at the Auto Expo 2020. Dr Pawan Goenka, MD of Mahindra & Mahindra, had confirmed that Mahindra is already working on the scooter and more effort is being placed to get the price right for the e-scooter in the Indian market. Driven by a 4 hp centrally-mounted motor powered by a 1.6 kWh battery, the e-Ludix offers a range of 50 km per charge. The battery takes 4 hours to be charged completely. There is no further update on the project.

It was reported during the Auto Expo 2020 that Vespa would introduce the Elettrica in India and that it was working on an India-specific electric scooter.

Sudhanshu Agarwal, VP (sales, domestic and international business), Piaggio Group, has said that the first Vespa electric scooter for India will be based on the Vespa Elettrica. The company may derive only the design from the global model and use low cost components in order to price it affordably. The launch of the first Vespa electric scooter in India will take place in 2022.

There were reports in the electronic media in 2018 of Benelli evaluating products in electric mobility to be launched in India. Benelli India Managing Director Vikas Jhabakh had said that the company is investigating the possibilities of launching an electric scooter. He said that Benelli could launch an electric two-wheeler by 2022 and the decision would be shaped on how the Indian government’s EV policies evolve. Benelli is learned to be developing electric scooters for global markets, which it could launch here by the middle of next year.

Rajiv Bajaj, the MD of Bajaj Auto, has confirmed that the Chetak’s platform would be used to build a high-performance electric scooter. Swedish brand Husqvarna is already developing such an offering for the European markets, leveraging Bajaj’s technology. Since it will be developed on the Chetak platform and for cost reasons should be manufactured in India, it is very likely that this high-performance version will be sold in the country. Husqvarna now sells bikes in India through KTM stores and will be keen to add more products relevant to the local audience.

The electric scooter from Italy’s most nostalgic two-wheeler company was confirmed to make its global premiere at the Auto Expo 2020, and given those plans were shelved and the COVID-19 heavily impacting businesses, we expect to hear about the status of the scooter later this year. Lambretta’s first electric scooter will have a metal monocoque chassis with metal body panels that clearly differentiates it from Chinese scooters and copycats.

Update: A new report has revealed the features of the next-gen BMW 7 Series. These features should be offered in the BMW i7.