The Revolt RV400 is currently the most advanced electric bike available in India. ElectricVehicleWeb.in reader Kamlesh has been riding it for close to a year now. Here’s his ownership review of the flagship Revolt electric bike:

Why did you choose the Revolt RV400 over a regular bike?

I am a salaried person and employed now for five years. I am from a village in Nashik (Maharashtra). From the last five years, my daily commute used to be of minimum 100 km. So, daily I had to use public transport which used to cost me time and money. I was disappointed because I had to pay very high charges and I didn’t have a personal vehicle.

I feel more comfortable on a gearless vehicle like the TVS Scooty or the Honda Activa, and for long-distance transport, mopeds weren’t suitable. So, I adjusted this way for 4-5 years, but somewhere in my heart, I felt like if I could get a gearless bike for my commute, then my cost will reduce and my time will also be saved.

In April 2019, I talked with a friend of mine that I am thinking to buy an Okinawa electric moped. At that time, that person suggested me to wait for some time. He said that a good Revolt bike is going to be launched, which is electric and because of being a bike, the wish I had for a gearless bike will be fulfilled with this model. So, for that reason, I waited longer.

When Revolt Motors launched electric bikes in June, I made a booking on my name and the company committed to me to deliver in August. However, during the final launch, the company told me that it will be December when I will get my Revolt electric bike. So, I had to struggle at that time because of the waiting period. I continued using public transport.

Finally, on 19 December 2019, I was delivered my Revolt electric bike. And since then, my commute started happening on my own ride. I have a daily commute of 80-100 km on this bike. When the COVID-19 situation emerged in India, almost all public transport shut down. I work in such a sector where essential commodities are handled, and so, going to work was a must for me. If I didn’t have this bike at that time, then maybe I would have had to quit my job. Because I had my bike, I didn’t face any trouble in my commute. My routine continued alright.

Tell us about the booking and delivery experience of the RV400?

I booked (online) on 25 June with a deposit of INR 1,000. Then, I did the final booking in August. I got the delivery of the bike in Pune and rode it to Nashik. The distance from the Revolt showroom in Pune to my home is almost 190 km. When I left Pune, the bike had 100% charging. After covering a distance of 100 km, we took a stop at a place. I waited for one to one and a half hours, had my bike charged and some food in the meantime.

Did you have to search for a hotel that gave you a charging point?

No. There was a fuel station where I requested them for allowing me to charge my bike. I told them that I needed to cover a journey of 100 km to reach my destination and that this is an electric bike. After seeing the bike, they were intrigued! In fact, they allowed me to charge my bike free of cost! There was a hotel nearby, so I rested and had some food in the meantime.

What is the big difference when shifting to a Revolt electric bike?

Before I used to ride my Honda Activa and TVS Scooty for local purpose in my town. I wasn’t using them to go to the city. But after using this (Revolt RV400), I understood a big change that this is a bike, which is stronger or more robust. I ride on highways, where even if a large vehicle like a truck or a bus drives close by me, there is no issue.

I stopped having whatever petrol expense I had completely. I was using public transport which used to cost me INR 3,000-3,500 a month. So when I started using the Revolt RV400, my cost came down to INR 400 a month. So almost 90% expense was over. Till date, I have ridden for around 15,000 km.

What about the riding experience, like acceleration, quietness and smoothness?

This Revolt RV400 is very smooth. Initially, because it is electric, it took some time adjusting. But after understanding the changes, I was able to ride it properly. People often say that EVs face problem on hilly roads. However, I feel the opposite. I find climbing up more enjoyable than the descent.

How do you usually charge the Revolt RV400? Revolt also has battery swap stations, right? So what is your experience with these?

I charge the battery fully at my home only. And as for the question about the battery swapping facility which Revolt has provided, that is only in Pune. Because I am in Nashik, it is not available to me.

How long does it take to charge the Revolt RV400?

I put my battery in charging mode at night. If I start charging at 9 o’clock, it gets fully charged by midnight. After going from home to office and coming back (80 km commute), I have a balance of around 30% remaining. So I do not need to charge anywhere during my daily journey to and from Nashik. I haven’t faced such an issue of power-cut until now because of having an inverter at home.

On highways, I mostly ride at 60 km/h. In the city, I have to ride slow because of traffic. Combined, I complete my 80 km journey using around 60% charge.

When I’m in Nashik, I don’t need to fully use the battery. But when I go Pune, I try riding till 0% SoC. I tested it twice. One time I got a range of 138 km, and recently I got a range of 155 km. The second time, my speed was 35 km/h because it was raining and I had to ride safely.

What are your thoughts about the app and the features in the Revolt app?

On the Revolt app we can select from the four faux exhaust notes of the bike. We get the battery range information also on the app. At the time of charging, the charging status can be checked on the application. We can check all the places where the bike has been ridden every day. There’s a geofencing feature, for if I want to restrict the bike from being ridden outside of a perimeter. I get a notification if the defined perimeter is breached.

What are the features you think can be improved on the Revolt RV400?

I think it would be great if cruise control is brought to the Revolt RV400. That’s because when I ride the Revolt RV400 at a constant speed on the highway, my hand starts to pain out of holding it in the same position. I am disappointed with the seat. Improvement is needed in the seat because after riding for 50-60 km, thighs start to pain. So an improvement about that is necessary.

How has been the service and maintenance of the Revolt RV400?

I’ve been to Pune for servicing the Revolt RV400 twice till date. Both the times the service experience was really good. I will give them a 5-star rating. Taking care of customer for service after the sale is very important, and Revolt service team is doing this work very well.

The first time I went for service was in February. A small incident had happened with me, and at that time, my speedometer broke during a small accident. So, I needed a replacement for the speedometer. I received a very good service that time, and recently when I went again for service, they replaced parts worth almost INR 12,000 under warranty.

There was a loose connection in the fuse due to biking off the road, so that was also changed. Moreover, during the lockdown period, the horn wasn’t working. They inspected these parts and replaced them under warranty.

The day I went to the service point, they replaced the parts after re-inspection, and as part of the normal servicing that was scheduled at 10,000 km, they checked all the regular inspection points, like the horn, wheel alignment, indicators, remote, headlamp, battery, etc. They checked all these small points, even saw if there were any loose screws.

I am really satisfied, and I am telling you that only that the after-sale support they have given is excellent, and the team is also really good. Most of the time, because I am Nashik, if there is a small issue, we call them and ask about the issue. They do a video call with us and help us resolve the issue.

Have you taken the subscription plan or you paid the cost upfront?

I paid the whole amount in cash. The bike cost me INR 1.10 lakh OTR. 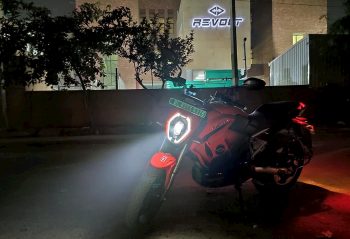