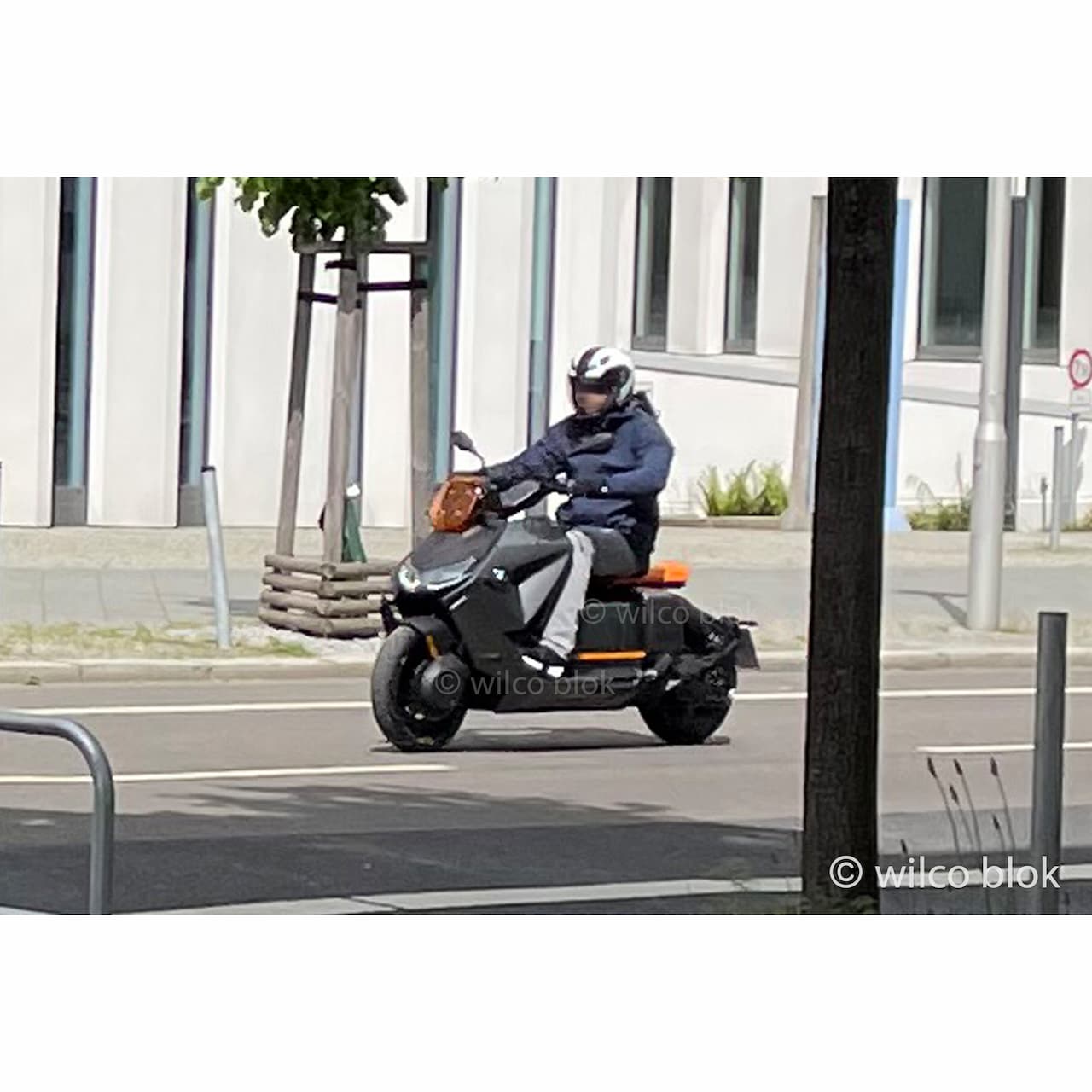 As road-testing of the production BMW CE 04 continues in Europe ahead of the launch this year, a new set of spy pictures has surfaced. Pro spy photographer and ElectricVehicleWeb supporter Wilco Blok (Instagram: @wilcoblok) has snapped a prototype in a dual-tone colour.

The new spy pictures show BMW CE 04 in grey with an orange body stripe, an orange visor, and an orange seat. It looks like the footboard of the production version is lower than that of the concept, which should make the seating position for the riders, especially tall passengers, comfortable. The rear fender is significantly longer and conventional, which should offer better protection from water splashes. Unlike the concept, the final model has turn indicators and mirrors to comply with the safety regulations.

The spy pictures and patent images indicate that the final version of the BMW CE 04 is close to the concept. BMW Group said that the BMW CE 04 concept was a “near-series” model when unveiled in November last year. The company had then said that it is a further development of the BMW Motorrad Concept Link.

The production BMW CE 04 features additional fender support on the rear of the single-sided swingarm and a longer rear fender with a license plate bracket. Look closer, and you will note that the shape of the lower body on the sides towards the rear is also a little different. The unconventionally designed “floating” seat doesn’t have a hump to separate the area for the rider and the pillion.

There’s no word on the specifications of the production BMW CE 04. However, like the concept, it should feature a flat battery in the underbody that keeps plenty of storage space free below the seat and provides a low center of gravity for a more dynamic riding experience. LED lights and a large digital instrument cluster should also be among the key features of the new BMW electric scooter.

When BMW Group announced the concept, it had said that “the urban target group mainly rides short distances of approx. 12 km per day.” So, it may not be looking at offering the production model with a swappable battery pack or a very long travel range.

The fully digital instrument cluster of the production CE 04 would be different from the 10.25-inch unit of the concept model. The production screen isn’t as wide, but it is visibly taller. Although the concept’s display looked appealing, the conventional size and aspect ratio used in the final product’s display looks practical for easy-to-access information in everyday outdoor conditions.

In May 2021, BMW confirmed that the production BMW CE 04 electric scooter (BMW Motorrad Definition CE 04) would have its world debut this summer (June – August 2021).

BMW Motorrad has been electric for quite some time. Our CE 04, which is to my right, is the perfect fit for the city and it will celebrate its world premiere in the summer. And at the IAA Mobility, we will show you much more in this regard.

Oliver Zipse, Chairman of the Board of Management of BMW AG, at the 101st Annual General Meeting on May 12

More details about the production BMW CE 04 should emerge closer to its debut this year.