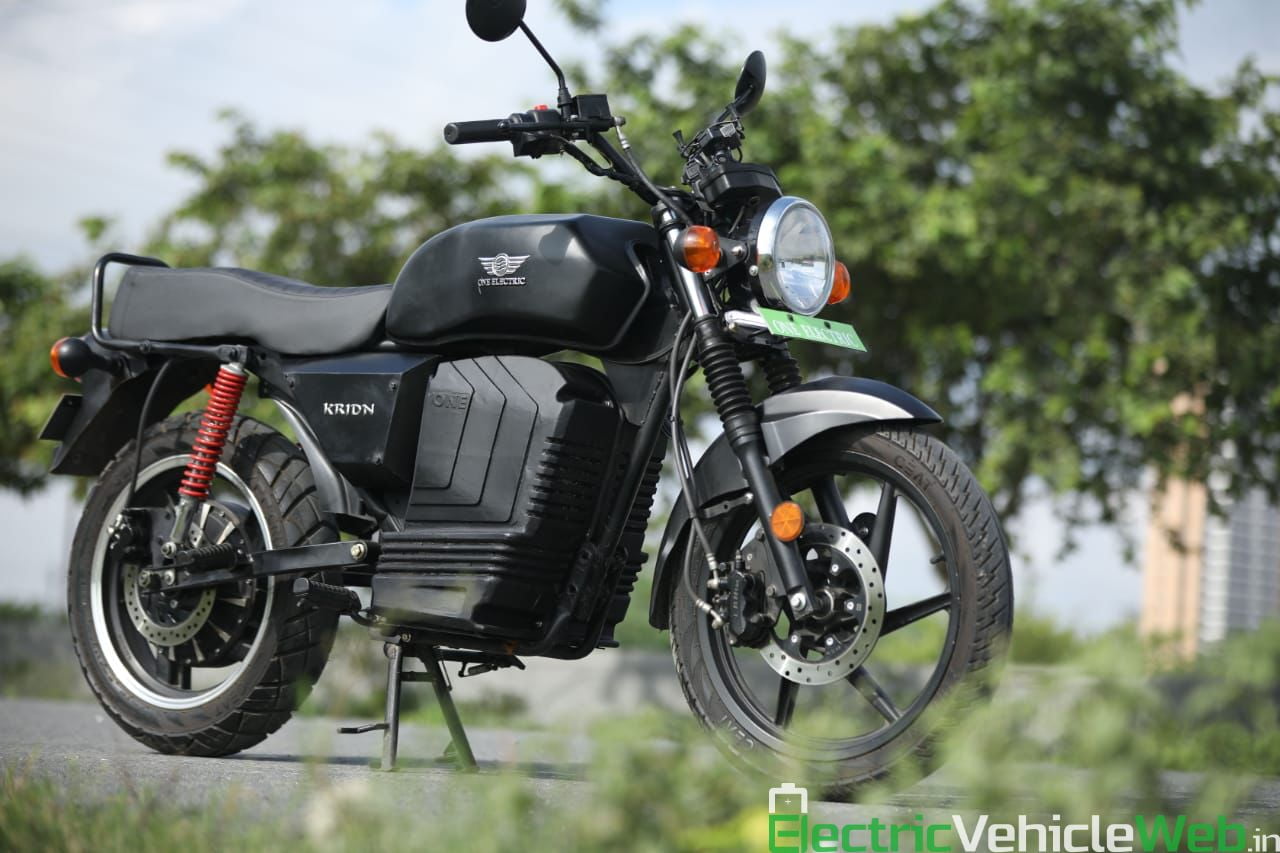 One Electric has started delivering the Kridn electric motorcycle to buyers in Hyderabad and Bengaluru through its distribution partners. The company has said that feedback from dealers has been positive and that customers are happy to own a motorcycle without a gear system. One Electric will commence deliveries of its electric bike in Kerala and Tamil Nadu in January and soon after customers in Maharashtra and Delhi NCR can own one.

Noida-based startup One Electric is ready to launch its first electric bike, One Kridn. Gaurav Uppal, CEO, One Electric, has shared some exclusive details with us.

Pronounced Kree-Done, the word Kridn means ‘to play’ in the Sanskrit language. The motorcycle has been in development for the past two years. One Electric used a Honda frame as a reference but ended up designing a brand new one to make it usable for electric vehicle components. The chassis put to use in the One Kridn is 2-3 kg heavier than those of similar bikes.

EVs usually tend to have a futuristic design that involves funky elements and at times even offbeat proportions. However, the One Kridn doesn’t carry a futuristic design, and it doesn’t look like a regular bike of the current era either. All that’s on purpose. Uppal tells us that the company wanted the bike to have a cafe racer kind of design but is built for utility.

While some companies rehash Chinese electric bikes and scooters to market them as indigenous products in India, One Electric has designed the One Kridn from the ground up by itself.

The One Kridn is a truly made in India EV, not a locally assembled Chinese product in disguise. The new electric bike has Made-in-India chassis, front and rear suspension, tyres, lights, speedometer, tank and seat.

One Electric owns an IP right for the design, fuel tank and battery box cover of the One Electric. The company also has two provisional patents for a new type of motor which is under development. In all, there are 6-7 IPs the company holds right now.

Uppal says that apart from the cells of the battery pack, motor controller and a single brake component, everything comes from a factory in India. The reason the company is importing the three items is that they are not available locally. For all other parts, it has gone for localisation regardless of the cost. The company is also working on localising the motor controller unit.

Our locally developed and manufactured heavy duty chassis is designed to match our electric drive train requirements, and also to ensure a long life on tough road conditions. The battery, motor and controller are also designed to provide high power and speed, along with ample range for the city commute. Besides the chassis, the fuel tank and the seat have been designed In-House by the ‘One Electric’ team, with a patent-pending for the design of the motorcycle.

Gaurav Uppal, CEO of One Electric

The One Kridn’s electric motor generates 5.5 kW (peak)/3 kW (continuous) of power using energy from a 72 V, 40 Ah or 2.88 kWh battery pack. The battery pack would require servicing after 3 years or 4-5 years depending on the usage. Charging it fully using a normal charger takes 4-5 hours. Using a fast charger, that time reduces to 3 hours. Work is on to roll out a bigger battery pack that lasts at least 5 years in 2021.

The performance of the One Kridn electric bike will be identical to a 125cc motorcycle. It has a top speed of 95 km/h and returns a range of 120 km in Eco mode and 80 km in Normal mode. The bike can go from 0 to 60 km/h in eight seconds.

One Electric is primarily looking at the South Indian states: Karnataka, Kerala, Tamil Nadu, Andhra Pradesh and Telangana. The company will consider launching the Kridn in North India afterwards. It is open to B2B tie-ups right now in North India, though. The company sees a lot of potential in the bike taxi segment and finds the One Kridn the most suitable option for that segment. It is considering supplying the new electric bike as a bike taxi nationwide but will tie up with only one company for only one location for now.

ElectricVehicleWeb understands that the Kridn was designed to be a robust and long-lasting electric motorcycle and a workhorse that can offer the same usability as a Hero or Honda 125 cc motorcycle. While most companies sell EVs in India in only cities, One Electric sees potential for its products in rural India. The One Kridn has a robust build and an upright seating posture that gives comfort that make it suitable for rural customers.

The lack of charging infrastructure is not as big of an issue as it may seem for the company as the internal tests show that the bike does about 80 km/charge with a pillion rider. There’s also the cost of ownership advantage related to cheaper power tariff in rural areas and the untapped potential in Africa where the bike taxi market is growing which the company is studying as a potential sales avenue.

One Electric is taking the opposite route when it comes to sales outlets. While the norm is to have company-owned experience centers or company-authorised exclusive dealerships, the electric bike startup is encouraging dealers to have multi-brand showrooms to sell the One Kridn. This would make survival for them easier until the EV demand builds up and starts generating significant volumes.

What is the price of One Kridn electric bike?

Upon launch, the Kridn will be competing with the Revolt RV400. The Okinawa Oki100 will join the competition in a couple of months. The RV400 has a range of 150 km, 100 km and 80 km in Eco, Normal and Sports mode respectively. It is currently on sale in Delhi, Pune, Ahmedabad, Chennai, Hyderabad and Mumbai. You can also go through our list of upcoming electric bike models in India if you are looking to switch to a vehicle with no emission.