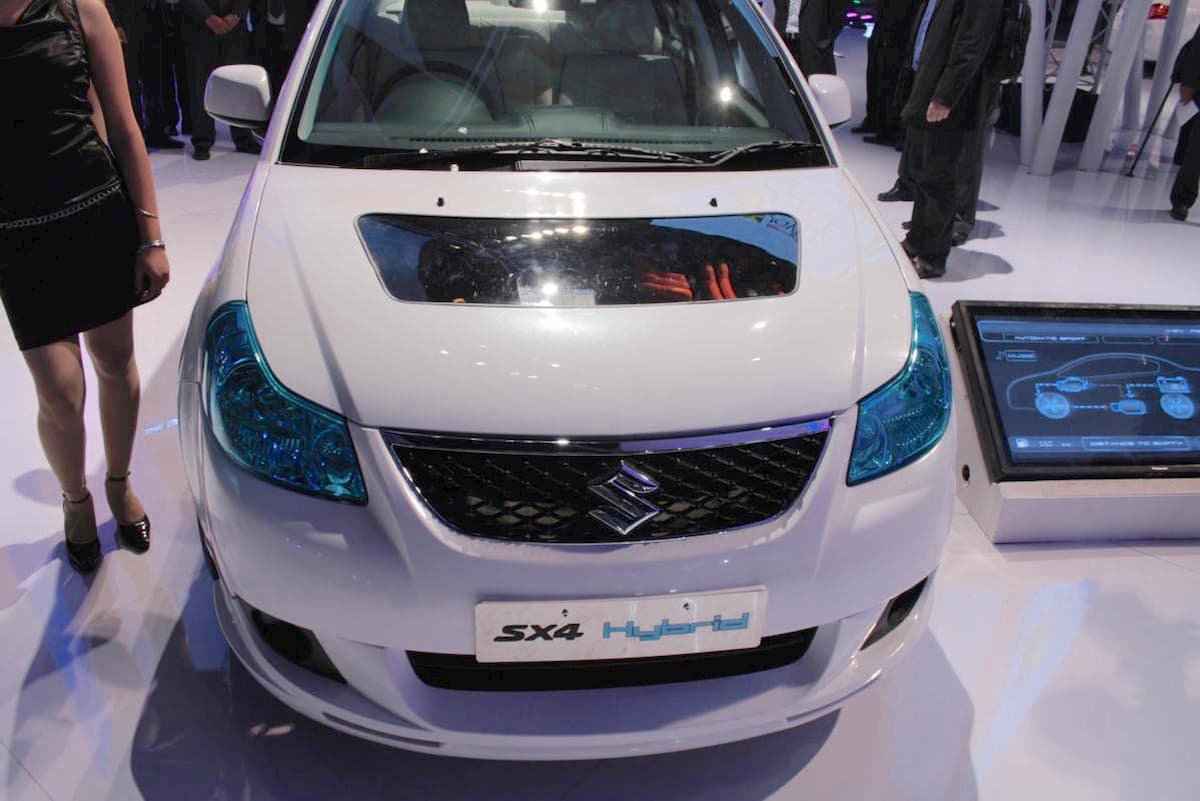 While Maruti’s plans to launch its first pure electric vehicle has been deferred to 2021, the past decade has seen the automaker showcase or conduct road trials of at least a half dozen electric models. Here is a snapshot of six Maruti electric cars – including strong hybrids (self-charging electric vehicles) – that appeared on the the road leading to the Wagon R EV.

Over 10 years ago, when India hosted the Commonwealth Games, Maruti Suzuki used the event as a branding opportunity for the SX4 Hybrid. Back in this time, hybrid cars in India were almost a non-existent concept (save for the Honda Civic Hybrid and Toyota Prius), and a Maruti hybrid car on the streets of New Delhi attracted quite the attention.

The SX4 Hybrid and Eeco Charge concepts were developed by a small team of engineers at Maruti Suzuki as a part of the Indian govt initiated and SIAM coordinated NHPP & MNRE National Hybrid Propulsion Program (NHPP) and the High Energy Density Battery Development Program from the Ministry of New & Renewable Energy Sources (MNRE). The vehicles were first displayed at the Auto Expo 2010 held in Pragati Maidan.

The Full Parallel Hybrid came with a 5-speed Automated Manual Transmission (AMT) and twin clutch system. The 1.2-liter K-Series petrol engine with a 50 kW electric motor and a lithium-ion battery meant 25 percent more fuel efficiency than its petrol counterpart. The SX4 Hybrid was capable of running on pure electric mode as well.

Along with the handover of the SX4 Hybrid, Maruti lent 4 Eeco Charge units, thus debuting a Maruti electric car for the public. The pure electric MPV deployed a 50 kW motor and a 24 kWh Lithium-ion battery. A range of 100 km and a top speed of 100 km/h along with a ‘Sport’ mode for acceleration lovers was seen on the Eeco Charge.

The electric Maruti saw its battery packaged under the floor, while the driver got a real time display of state of charge and distance to empty.

At the 2020 Auto Expo, the Swift Hybrid was showcased, however, there are no immediate plans to launch this hatchback. Based on the Japanese spec, it sees a 92 hp and 118 Nm, 1242cc, four-cylinder petrol engine paired to a 5-speed automated manual gearbox, and a 13.6 hp and 30 Nm electric motor. The Swift Hybrid delivers a mileage of 32 km/l (for the Japanese market) and was thought of a way to get feedback from Indian audience for a top-end variant of the hatch. Its unlikely that this Maruti hybrid car, which has an electric mode, will launch in the country owing to its unjustifiable price premium.

At the 2014 Auto Expo, Maruti displayed the Swift Range Extender (based on the previous gen Swift), another Japanese creation featuring a three-cylinder 658 cc petrol engine with a 73 hp electric motor. It delivered an astonishing 48.2 km/l and 25.5 km of pure EV range.

At the 2018 Auto Expo you may remember seeing this Maruti electric car: The E-Survivor concept. With design inspiration from a rugged, old school 4×4, this electric SUV was designed with four-in-wheel electric motors which could control the wheel independently. The E-Survivor also saw autonomous driving capability, which the company said, could be switched off for off-road driving.

Design highlights from the concept are seen on the Jimny compact SUV, which launches in India next year. A 5-door variant on the Jimny is also on the cards, positioned above the Vitara Brezza.

India’s largest carmaker announced during the 2018 Auto Expo that it would commence testing of 50 Maruti Wagon R EV prototypes which were imported from Japan and assembled in India. These Japanese market units continue to be spotted on test around the Delhi-NCR even today. Road tests are crucial for the future Maruti electric car which is expected in the first half of 2021. The Japanese Wagon-R electric car has a 72-volt, 10.25 kWh battery, and is based on the Heartect platform.

As per reports, the first Maruti electric car, based on the shell of the Indian Wagon R, is to launch in India next year. It will have a range of 130-180 km with DC fast charging providing 80 per cent battery charge in about an hour. The Maruti EV could be retailed via the premium Nexa chain of dealerships. It would also share other components such as the seats, AC vents, multi-function steering wheel and the touchscreen SmartPlay infotainment system with the latest gen Wagon-R which was launched in 2019.

At the 2020 Auto Expo, the Maruti Futuro-E Concept was showcased, and as the name suggests, this was an electric-ready SUV concept. Though details about its powertrain or battery were not revealed, Maruti said the Futuro-E previews a coupe-style SUV design for its future road car designs.

Design highlights from the concept could be seen on bigger Maruti SUVs that could launch later this decade.

What is a hybrid car?

A hybrid combines at least one electric motor with an internal combustion engine to move the vehicle. Hybrid cars can recapture energy during braking, called regenerative braking. Here’s a video explaining the working of a basic (mild hybrid) car.