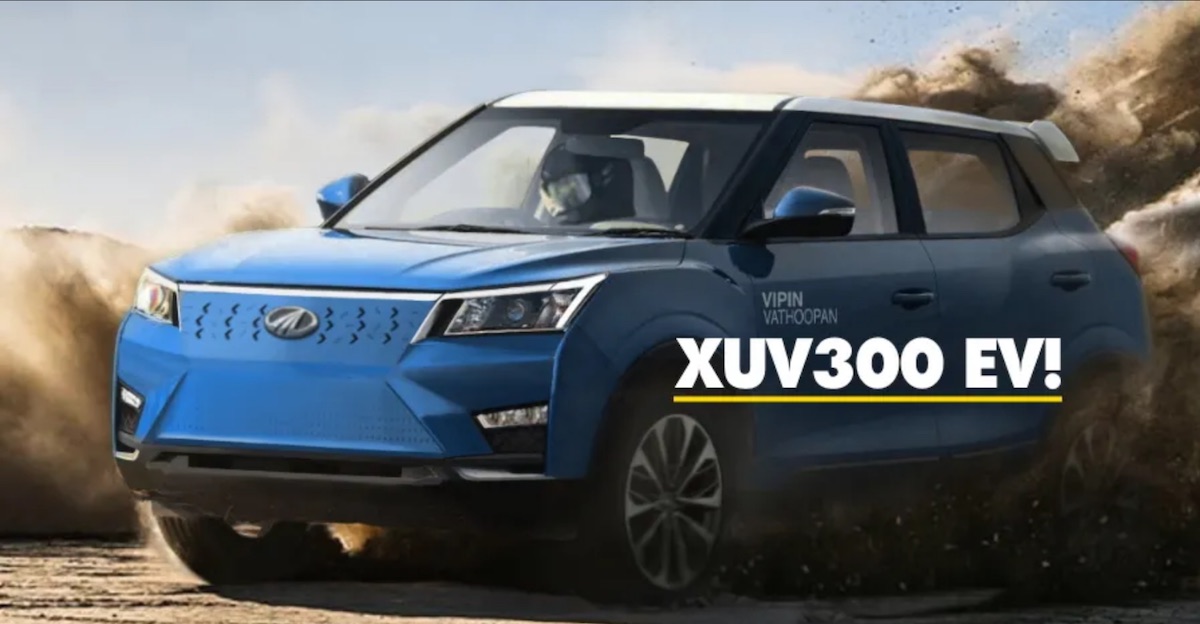 Update – Cartoq has created a realistic render of the Mahindra XUV300 electric (above) and it looks like the illustration has been made after seeing the image of the actual vehicle.

In the teaser released of Mahindra’s production electric vehicles arriving at the Auto Expo 2020, some design details of the Mahindra XUV300 Electric are visible. The vehicle gets a uniquely designed nose, complete with Kia ‘ice cube’ style headlamps with a blue lens, a closed grille with an arrow pattern for enhanced aerodynamics, sectioned foglamps placed at the upper edges of the bumper pockets, and a blue accent on the bumper lip. Finally the Mahindra roundel is illuminated much like the VW logo on the I.D. series concepts.

Mahindra had announced that it will launch the electric variant of XUV300, when sub-compact SUV was launched in February 2019. And the fact that Mahindra’s rival, Tata has just launched the Nexon EV in the same segment XUV300 is positioned in, it is not a surprise that the company wants to show its readiness to compete. The XUV300 electric would be Mahindra’s first high voltage and high-performance electric car in series production.

The XUV300 Electric was initially planned to come out in the second half of 2020, but that plan has changed with Managing Director of M&M, Dr Pawan Goenka, mentioning on a call last November that it has pushed its introduction to 2021. What will not change is the fact that it will be offered in two versions – standard and long-range. The standard range will offer 200 km in a single charge and the long-range can do 350 km to 400 km trip. The electric SUV, powered by the MESMA 380V scalable electric architecture, will be driven by battery cells developed by LG Chem exclusively for Mahindra.

The XUV300 Electric (codename: Mahindra S210) will retain the basic shape of its donor but carry some external touches for distinction. Being an electric vehicle, the air dam is replaced by a closed-off grille and the bumper is recast for better aerodynamic efficiency and expressing its ‘eco’ credentials. Inside, a digital instrument cluster and a large central touchscreen could also be expected with other details of the dashboard to remain unchanged. Due to the placement of the batteries on the floor, the handling of the XUV300 EV could improve thanks to the lower CoG.

Through its partnership with the Blue Oval, Mahindra will also be launching an electric sedan based on Ford Aspire, for which it is reportedly developing a 60 kW motor. The car is expected to be powered by a 25 kWh battery and offer a range close to 200 km. There was also a report that M&M is developing a new mid-size SUV with Ford that could be named the Mahindra XUV400 which will get a plug-in hybrid variant.