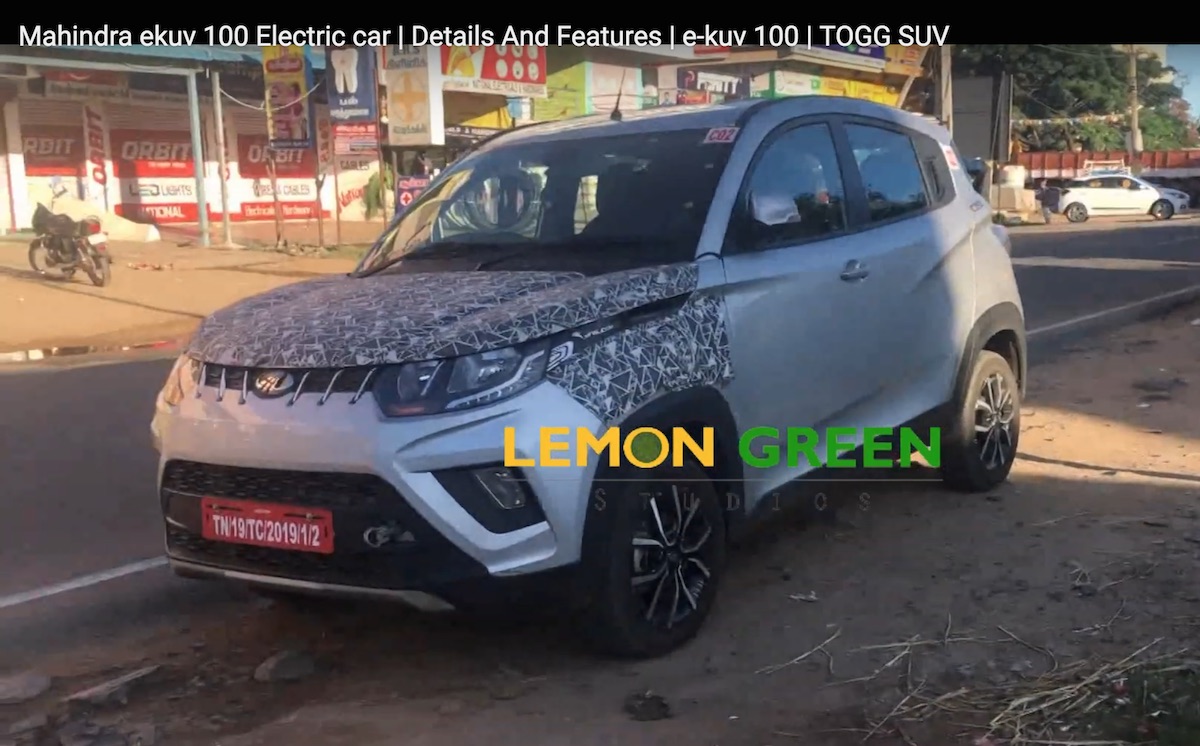 Mahindra will introduce the electric version of the KUV100 by 31 March 2020, and thanks to Youtube channel Lemon Green, we can show you the vehicle and the location of the charging inlet.

The eKUV100 was showcased in the concept form at the 2018 Auto Expo and the company gave out some of the car’s specification then. The company said that the e-KUV100 combines the benefits of an SUV with the unique advantages of an electric car. It mentioned a range of “over 140 km,” and optional fast-charging which can extend its range by 80% in less than an hour. Some of the car’s features included smartphone connectivity, remote diagnostics, cabin pre-cooling and location tracking.

Dr Pawan Goenka, Managing Director of Mahindra & Mahindra, said over a call in November 2019 that the KUV100 electric was on track to launch in the first quarter of 2020:

We have electric vehicle portfolio coming up S110, which is electric KUV will be launched in Q4 F20 followed by what we call internally C100, which is a last mile connectivity, electric vehicle, sort of a different concept than anything which is existing today, which we will launch somewhere around second or third quarter of FY ’21.

Since the display at the Auto Expo 2018, Mahindra has further developed its mini SUV that will take the place of the e2o plus which was discontinued last year. The updated specifications would consist of a 15.9 kWh battery powering a 40 kW motor (53.6 hp) that develops 120 Nm of continuous torque. It would take about 5.5 hours to charge completely while through DC fast-charging, it would reduce to about an hour. The final range is expected to be 120-140 km in the real-world. The handling of the eKUV100 theoretically should improve over the petrol model as the battery pack is mounted to the car’s floor that lowers its centre of gravity.

The Mahindra KUV electric does not have the features, design appeal or the range to compete with the Tata Nexon EV, and not being a long-range SUV, the pricing has to be realistic for it to get attention from fleet operators. Expect the eKUV100 to go on sale for a price of about INR 9 lakh ex-showroom (excluding the FAME II subsidy) shortly after the reveal.