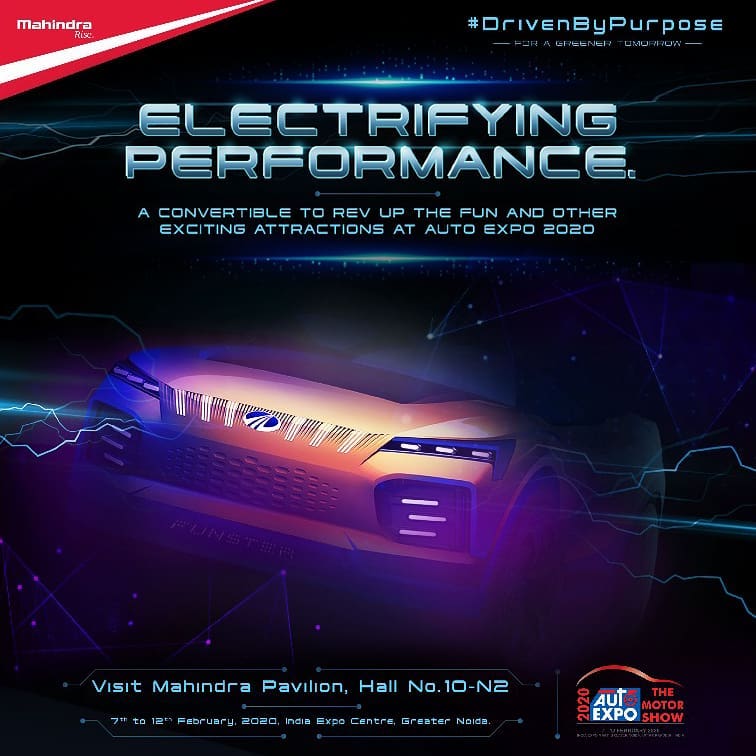 Mahindra Automotive has confirmed that it will present the Mahindra Funster at the Auto Expo tomorrow and that it is an electric SUV.

With the tagline ‘Rev up the Fun,’ the company will preview the second generation Mahindra XUV500 with this electric design concept. The second generation XUV500 that entered testing late last year, gets a new C-platform, which will also underpin a second SUV from the joint venture between Mahindra and Ford for the latter.

The high performance electric vehicle is expected to demonstrates the capability of the company’s electric system. It will likely get a 60 kWh battery pack and four electric motors, one for each wheel. The Funster, it is reported, puts out a total power of 230 kW, equivalent to 313 hp, and can accelerate from 0 to 100 km/h in under five seconds. The Funster concept is probably designed to draw crowds and selfies to the Mahindra stall and the company is unlikely to sign off a production car.

Mahindra will be showcasing a total of 18 vehicles at the expo. On the electric corner, first up is the eKUV100 that will be launched for a price of under Rs.9 lakh, making it the most affordable EV in the country. The eKUV100 will be primarily aimed at fleet operators and comes with a range of about 140 km. The car can be charged to full capacity in 55 minutes using a fast charger or 5 hours 45 minutes with a regular charger. On the other hand, the eXUV300 will have a high capacity 40 kWh battery pack with a range of up to 350 km and will be targeting private customers.

Finally the Mahindra Atom’s production version will be displayed at the Expo. The Atom has been seen testing under camouflage and is expected to get a 15 kW electric motor with a top speed of 70km/h. The quadricycle, a first for Mahindra, will also get swappable battery and a smart connectivity system.

Dr Pawan Goenka, Managing Director of Mahindra & Mahindra, has confirmed that the Mahindra Atom would be launched in about 6 months time. Speaking to journalists at a media roundtable following the Treo Zor’s launch today, Dr Goenka said that they were working on the product.

EVW understands that Mahindra Electric is waiting for conditions to stabilize as the country’s fleet operators. It is likely to open eKUV100 bookings in late 2020.