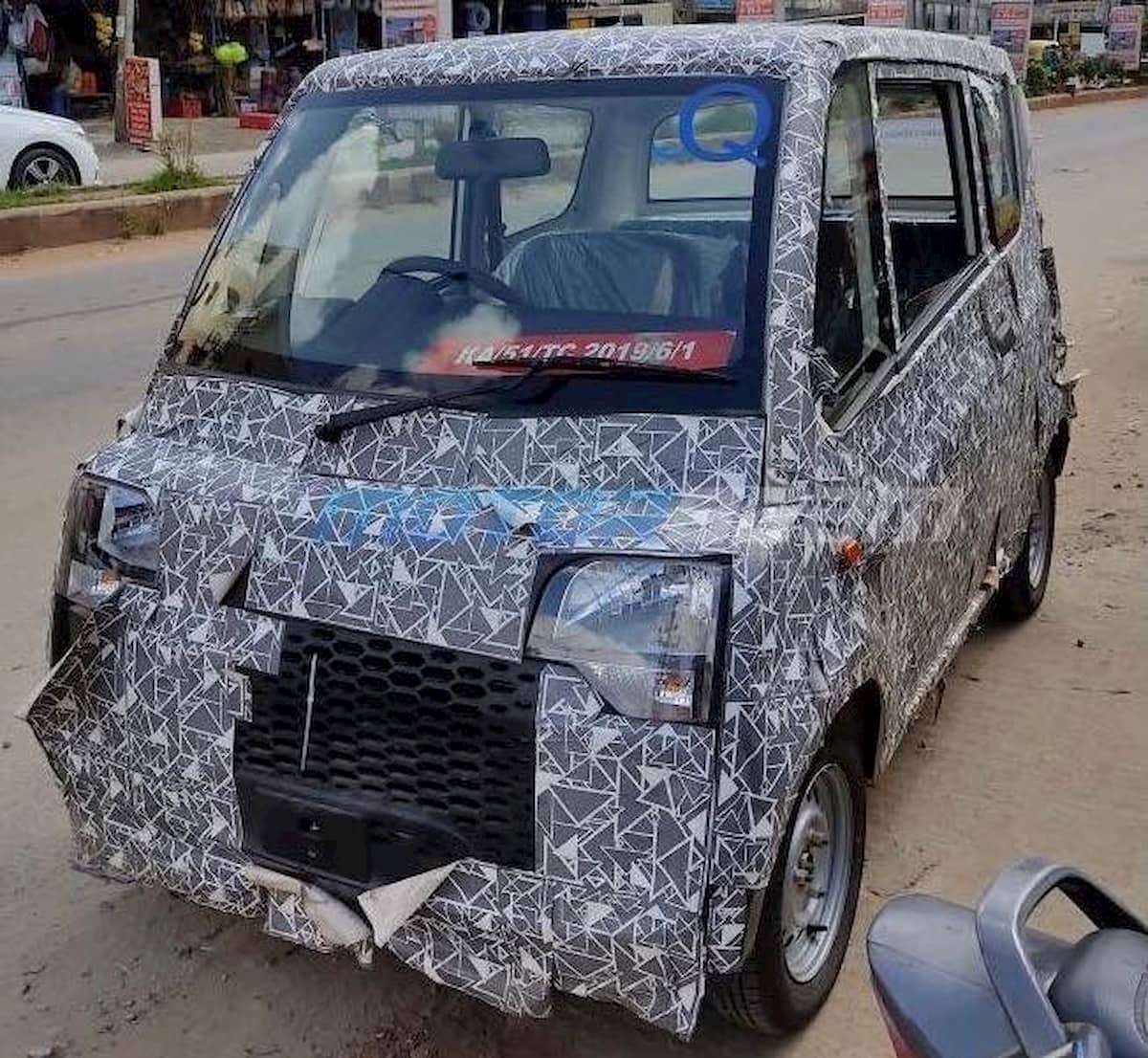 “And once we have the Atom product launched, which should happen in the next few months, then I think we’ll complete our portfolio of the last-mile connectivity and last-mile delivery,” Dr Pawan Goenka, CEO, MD & Director of Mahindra & Mahindra, confirmed this month.

The Mahindra Atom showcased at Auto Expo 2020 featured a storage pocket and a fire hydrant in the cabin. There was a sample with a larger storage pocket and no fire extinguisher also on display, as seen in one of the images in the gallery below. The prototype spied recently had a spare wheel in this place instead, and doesn’t get carpets or wheel caps.

Following the unlock last year, Mahindra testers resumed trials of the Atom electric quadricycle, and the prototype in the photo below is from around the company’s R&D centre (Mahindra Research Valley) shot by reader Harshavardhana. Unveiled at the Auto Expo 2020, there is nothing different about its design or features.

EVW has learned that the Mahindra Atom does not feature battery swapping (like the concept previewed in 2018) as the FAME II scheme does not cover it. Battery cost is not counted under the cost of the vehicle if it is a swappable model, and hence fixed battery is more popular.

Mahindra recently ‘teased’ features of its electric quadricycle in a post on Facebook. The Atom will become the first electric vehicle in the segment, seat three to four people (including the driver) and introduce itself as a green last-mile connectivity vehicle. Some of the listed features are Easy Luggage Loading, Large Glasses for an airy feel and ‘Extra’ interior space.

Showcased in production form at the 2020 Auto Expo (February), the Atom was announced to launch in the third quarter of 2020 but the pandemic had affected the supply of components, validation and testing, pushing the launch well into 2021. The shared mobility segment is affected due to social distancing and is expected to recover fully next year. The Atom was Mahindra’s disruptor for the last-mile mobility segment with its roomy cabin and premium features. Not just Mahindra, but any player trying to enter this segment would be watchful.

The Mahindra Atom electric quadricycle, like the Mahindra Treo three-wheeler and the Mahindra eKUV100 electric car, is a MESMA 48 platform product. The light EV platform supports batteries with a voltage ranging from 44 V to 96 V and motors with power and torque ranging from 6 kW to 40 kW and 40 Nm to 120 Nm respectively.

Technical details of the Mahindra Atom are unreleased but expect a power output of 8 kW, a real-world range of about 80 km per charge, a charging time of about 4 hours, and a top speed limited to 50-60 km/h on this Driver+2 seater vehicle.

The Atom will receive 4G connectivity option that makes bookings and payments easy for users, an app that provides the driver with the status of the vehicle, while features like seat belts, air-conditioner, a winding window for the driver, 12V power outlets and steering wheel make it quite advanced to the current offerings in the market. However, there is no swappable battery system on the Atom, like the concept that previewed it two years ago. Unlike a passenger car, the Atom does not have ABS or an airbag.

The Mahindra Atom will be featuring a more advanced yet affordable thermal management system for its batteries, says Mahindra’s Chief Technology Officer, Martin Murray, in a video interaction with ET Auto on Youtube.com:

Looking at the system with some tools, we had some confidence and we ended up matching the performance in the laboratory with the performance that we modelled very closely. So we think that we will have very quickly have an excellent thermal performance of the battery which translates into life and into utility for the customer. Those are the areas where we have already been able to apply the technology very effectively and we are going to do it more in the future with the confidence and with the experience we gained in this application.

Mahindra’s Chief Technology Officer, Martin Murray to ETAuto in May 2020.

What is the Mahindra Atom price?

Expect the price of the Mahindra Atom at around the Rs. 3.2 lakh mark (ex-showroom).

When is the launch of the Mahindra Atom?

M&M is expected to launch the Mahindra Atom by June 2021.