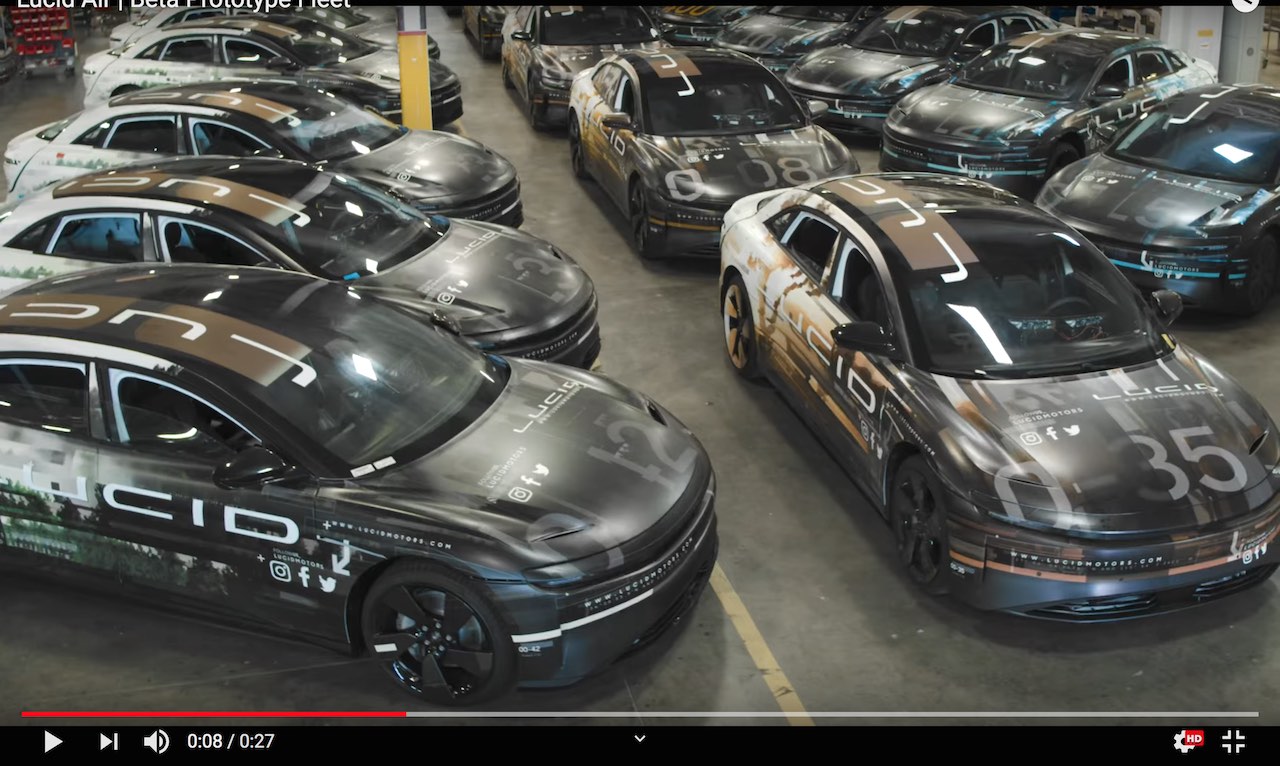 Update – Lucid Motors has confirmed that it will present the Lucid Air in an online reveal on September 9. During the event, the interior and exterior designs of the vehicle, product specifications, configurations, and price would be published. The company is promising a class-leading range combined with sustainable luxury, meaning it has to make the Air go farther than the Tesla Model S which now has an EPA-rated range of 402 miles on a single charge.

Lucid’s production facility in Casa Grande, Arizona is also on schedule for the completion of construction on its Phase One build in 2020.

Be sure to read the latest interview of the company’s founder Peter Rawlinson where talks about the choice of launching a sedan, the second Lucid product, the comparison to Tesla, etc.

Lucid has uploaded a video today showing its fleet of beta prototypes resting in a garage at its Silicon Valley headquarters. Lucid said last month that it has manufactured more than half of the expected 80 beta prototypes of the car which have gone into service for testing and validation for key vehicle dynamics and crash testing. The Lucid Air will be unveiled this year with a range of 400+ miles to a charge, an output of up to 1,000 horsepower and 0-60 mph sprint time of under 2.5 seconds.

Lucid Motors has unveiled a more recent or the final version of the Lucid Air sedan today when announcing the opening of order books for customers in the Middle East. The lone image shows several updates and parts not present on the concept car presented in December 2016.

Note the changes to the headlamps that come with individual units set closer to the grille, and complete production-spec wing mirrors. On the front bumper sits an intelligence panel for the ADAS (Advanced Driver Assist Systems) and a minor change the lip.

Lucid has announced that a reservation can be made for AED 3,800 (about USD 1,000) and deliveries in the region are to commence in late 2021.

In an interview with Motortrend, Lucid Motors’ CEO Peter Rawlinson has stated that the Lucid Air will be much better than the Tesla Model S, which cannot be dismissed as chest-thumping or a baseless claim as he was the one who engineered the latter.

Mr Rawlinson said that when he joined Tesla 11 years ago following a call from Elon Musk, the design of the car was already complete and he had to engineer all the bits to fit into the car. Tthe lessons from engineering the Model S was to maximise the benefits from the miniaturization of the electric powertrain, with understanding between design and engineering. Revealing more details about Lucid Air, Mr Rawlinson said the production version is a completely different from the prototype shown in 2016. While the overall design stays, the drive system has changed from 400V induction motors to the current 900V permanent magnet motors that are equipped with Lucid’s MOSFET inverter system.

He has also confirmed that the Air could be opted with up to three electric motors making a total of 1,800 hp and the battery capacity has been brought down from the original 130 kWh.

The unveil of the Lucid Air EV production car has been delayed due to the COVID-19 breakout but Lucid Motors has kept the interest around the launch alive by releasing footage of the Tesla Model S challenger periodically that was shot in previous months. Today it has uploaded a video from the car’s winter testing.

The video shows the Air EV playing in the snow. Lucid took to the northern part of Minnesota for testing the electric sedan and the Air EV was tested in four different tracks – circle track, ice field, snowfield and handling track. Cold weather testing is an important one for EVs as the efficiency of the battery degrades with lower temperatures. In a recent test conducted in Norway it was surmised that up to 28 percent of the range could be lost in cold weather conditions by modern electric vehicles.

After many delays, Lucid Motors finally found the capital it wanted in 2018 and was making good progress towards production before the shutdown. It was scheduled to unveil the vehicle at the New York Auto Show on April 10, but the show has been postponed to August 26 and the venue (Jacob Javits Convention Center) has become a makeshift hospital to treat coronavirus patients.

Lucid Motors is waiting to launch its first car, the Air EV that has been delayed because of the COVID-19 situation but that hasn’t stopped them from releasing a video of the car’s prototype testing. The video shows the car in its pre-production form returning a range of more than 643 km in a single charge.

Shot in February 2020, the video shows the team from Lucid taking the electric car on a round trip between San Francisco and Los Angeles, which has a distance of more than 640 km each side. The journey started from Lucid’s headquarters in Silicon Valley and went along the coastal Highway 1m reaching the piers of Santa Monica by the evening, on a single charge. After charging overnight, the team went to Hollywood, whizzed through Beverly Hills, glided along Interstate 5, climbed the mountainous Grapevine north of Los Angeles before descending to the Central Valley of California, drove across the Golden Gate Bridge and got back into the city, without stopping for recharging.

Lucid Motors hasn’t revealed specifications yet but the sedan is expected to have a total output of 450 kW. The company has opened a Studio in Newark, the first of nine studios that will opened in 2020 and confirmed locations include Beverly Hills, Los Angeles, San Jose and West Palm Beach. The studios in Beverly Hills and Silicon Valley will also get service centers and plans are on to extend the studio network to Miami and New York City.

The studios offer Lucid’s Virtual Reality Experience by combining physical and virtual worlds. Customers will be able to experience the seating position and comfort of the Air with an interior model that is setup with four seats.

Newark-based Lucid Motors, an EV start-up by ex-VP of Tesla, Peter Rawlinson, will be delaying the launch of its luxury electric sedan, Lucid Air till August 2020 due to the COVID-19 pandemic.

The company was expected to launch the production version of the Air electric car at the 2020 New York Auto Show in April but now that the show’s cancelled, the launch is expected to happen in August. The production schedule for the car, which will start at the new plant being built at Arizona, is also expected to have taken a hit amid the coronavirus outbreak.

In an email response to Silicon Valley Business Journal, Peter Rawlinson, Chief Executive Officer and Chief Technology Officer, Lucid Motors said that company is positive and is ready to launch the Air whenever the situation demands, despite the current COVID-19 situation. The company is continuing to interview new candidates through phone calls and moving forward with its expansion of personnel, which has grown over 1,000 employees so far.

Though no details are available on the battery or the motor, the Air electric sedan is expected to have a range of more than 640 km in a single charge. There are also reports that suggest the electric motor will have an output of 450 kW. The first examples of the car could be called the Dream Edition and are expected to have a total output of 1,000 hp and to cost over $100,000, taking on the Tesla Model S and the variants of the upcoming Mercedes EQS and Jaguar XJ electric.

After its announcement of building a $700 million factory in Arizona came to a stop as the company failed to raise the capital, Lucid Motors secured a $1 billion capital in September 2018 from Saudi Arabia’s Public Investment Fund, which is the principal investor of the company. 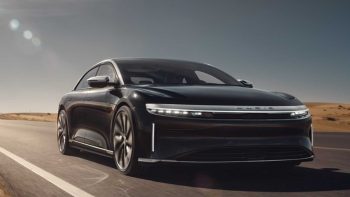 Update – Speaking to ArsTechnica.com, Lucid Motors’ Peter Rawlinson is asking the company not to be described as a “Tesla killer.”