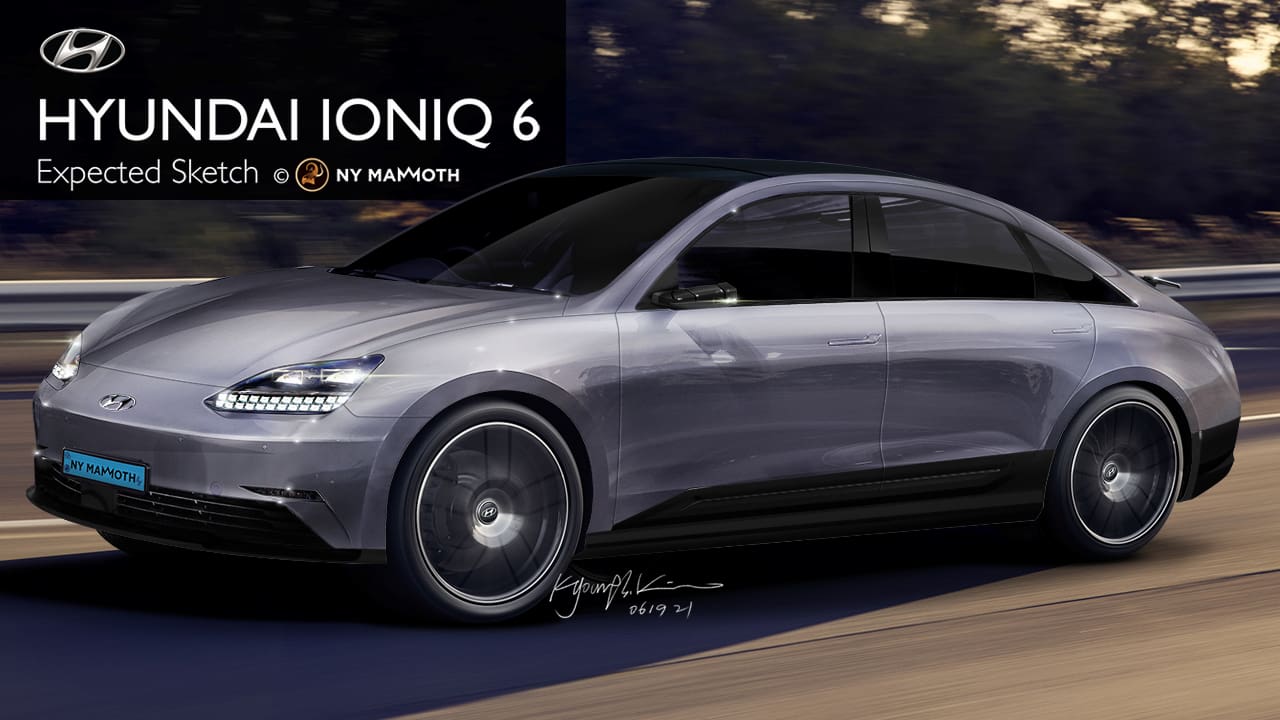 Naver user soonjung8116 has published spy pictures that reveal that road-testing of the full body prototypes of the Hyundai Ioniq 6 has begun in South Korea. It is the first time we’re seeing the production version of the Hyundai Prophecy concept.

At the U.S. debut of the Ioniq 5 in May, Jose Munoz, President and CEO of Hyundai Motor North America, reaffirmed that the Hyundai Ioniq 6 is still planned for launch in 2022. Furthermore, he revealed that it would be a mid-size sedan, thus an EV equivalent of the Hyundai Sonata.

We will follow the exciting Ioniq 5 compact CUV with the stunning Ioniq 6 mid-size sedan next year and the Ioniq 7 three-row mid-size SUV in 2024, and that is just the beginning. Hyundai will introduce 23 battery electric vehicles worldwide by 2025.

On April 22, releasing the Q1 2021 business results, Hyundai presented its mid-to-long-term EV strategy where it mentioned the Ioniq 6 release for 2022 as it had announced last year. By 2025, it plans to increase the sales of its EVs to 560,000 units.

Like the Sonata, the Hyundai Ioniq 6 is a midsize sedan, but it has different proportions. As a result, it may offer just as much space or maybe more than the combustion model, despite the smaller body. That’s the beauty of Hyundai Motor Group’s E-GMP platform underpinning the bespoke electric car, which has a flat floor and maximizes cabin space thanks to the lack of an engine compartment, and wheels pushed to the corners.

Sweeping curves and smooth lines set the Hyundai Ioniq 6 apart from the Ioniq 5. The gracefully dropping roofline and sloping beltline result in a bow-shaped greenhouse similar to the Prophecy concept. That and the tail section take inspiration from vintage cars of the 1920s and 30s, although some may argue there’s visible Porsche DNA here. Spy pictures also show virtual mirrors and largely closed-off aerodynamic wheels on the production car. In addition, it should feature pixel-like clusters in the headlamps and tail lamps first seen on the Ioniq 5.

Using details from the first Hyundai Ioniq 6 spy shots, Naver user NY Mammoth (shadow0122) has created a rendering to show how the exterior may look. The artist notes that while the concept version features a pixel-inspired design for the full cluster, the production version will get headlamps with only a part of the assembly featuring the pixel-inspired look. This change may allow a stronger high beam, enhancing long-range visibility, particularly on highways/motorways. In addition, we expect the final car to have a more generous greenhouse, conventional doors, less sporty wheels, and rectangular virtual mirrors.

The Hyundai Ioniq 6 would be the second member of the new ‘Ioniq’ EV sub-brand. As followed in the concept, it would take design inspiration from historical models, and at the same time, become a bridge to the future. Talking to Auto Express in April 2020, SangYup Lee, Hyundai Senior Vice President and Head of Hyundai Global Design Center, said the production version of the Prophecy concept will appear after the launch of the Hyundai 45 (which is now the Ioniq 5). It is reported that the production Hyundai Prophecy would replace the Hyundai Ioniq next year.

E-GMP is Hyundai Motor Group’s next-gen eco-car platform. Unlike the current one that underpins the Hyundai Ioniq and the Kia Niro, it is made solely for EVs. The new platform allows system voltage to double that of the old platform – 800 volts. Customers will be able to rapid-charge the battery pack at thrice the speed – 350 kW – to achieve 80% charge in 18 minutes.

Unlike the Kona and Ioniq EVs, the Ioniq 6 and other E-GMP models would offer a bi-directional power conversion function. The dedicated EV platform’s Integrated Charging Control Unit (ICCU) is an upgrade from the old eco-car platform’s On-Board Charger (OBC).

Unlike OBC, which typically allows a single directional flow of electricity from an external power source, ICCU enables vehicle-to-load (V2L) function. Electric machinery (110V/220V) can be operated using the energy stored inside the EV’s battery pack. One can even operate a household air conditioner and a large-screen TV.

Hyundai revealed most of the key specifications of the Ioniq 6 during a US-spec Ioniq 5 media event, as per a Carscoops report. The Ioniq 6 will have a 73 kWh battery and should deliver a maximum range of more than 300 miles (483 km)*. Rear-wheel drive and all-wheel drive will be the available drivetrain layout choices. The RWD configurations will have a single motor generating 160 kW (218 PS/215 bhp). The AWD configurations will make use of two motors, one propelling the front wheels and the other spinning the rear wheels. These will collectively produce 230 kW (313 PS/308 bhp).

*Assumed to be a targeted EPA estimate. The targeted WLTP estimate for the maximum range could be much higher.

The Hyundai Ioniq 6 may look and eventually drive like a Porsche! According to a report from evpulse.com, a high-performance Hyundai EV is in the works, and it’s an N variant of the Ioniq 6.

The technical setup of the Hyundai Ioniq 6 N could be similar to the Kia EV6 GT, which uses two motors generating a net power of 430 kW (584 PS) and a net torque of 740 Nm. If that’s the case, one can expect a 0-100 km/h acceleration time of around 3.5 seconds and a top speed of 260 km/h. Hyundai may offer the N variant of the Ioniq 6 with a long-range battery pack.

Announcing the Kona N on 27 April 2021, Hyundai suggested that it will launch N variants of electric cars. “Hyundai Motor looks to build upon its success with N brand in e-performance possibly with electric and hydrogen fuel cell powertrains,” the company said in a press statement. The company stated that the E-GMP platform “offers tremendous flexibility and possibilities.”

A day later, on the Hyundai N Day (28 April 2021), Thomas Schemera, Executive Vice President and Head of Customer Experience Division, Hyundai, stopped short of confirming that an E-GMP EV from Hyundai N is planned. He said:

Our new Electric Global Modular Platform (E-GMP) has a huge potential. That’s why, I guess, we’ll have the first fully electrified N model based on…

More recently, The Korean Car Blog reader and Instagram user h.hyl_47 spotted a Kia EV6 test mule with Hyundai N sport seats. While this development in no way is a confirmation for the Hyundai Ioniq 6 N, it’s still fueling the speculations in the media that Hyundai is indeed working on Ioniq N models.

The Ioniq 6 could be among the first Hyundai models capable of Level 3 autonomous driving with a new version of the company’s Highway Driving Pilot. Hyundai says that the vehicle can handle all “safety-critical functions” under certain traffic or environmental conditions. The presence of a driver is necessary, as the car may require driver intervention in some situations. The Ioniq 6 should offer hands-free automated driving on highways initially.

Hyundai Motor Group plans to invest USD 7.4 billion in the USA by 2025. A sizable portion of that amount is likely to go into EV production and improve the EV ecosystem. Hyundai has confirmed that it will begin manufacturing EVs in America, presumably at the Hyundai factory in Montgomery (Alabama), from 2022. The Hyundai Ioniq 6 or the Ioniq 5 could be the first EV the company manufactures in the country, which is likely to have the highest demand among all planned electric cars.

The Hyundai Asan plant has an annual production capacity of approximately 300,000 vehicles. As the demand for the Sonata is declining in the home market, the Ioniq 6 could come as a shot in the arm for this factory. Hyundai is considering pausing the operations for about four weeks during the summer vacation period in July and August to prepare the facility for EV production, Yonhap News reports.

The Hyundai Ioniq 6 will debut in 2022. The Carscoops report mentions that it will reach U.S. showrooms at the end of next year.

For companies like Hyundai, which have launched next-generation electric cars in 2021, the ongoing semiconductor shortage is proving a big hurdle and the pandemic’s effect. The Ioniq 5 has seen production delays, but the Hyundai Ioniq 6 is still planned for release next year.

The Hyundai Ioniq 6 will likely be available as a subscription in the United States. However, the subscription service will probably only instigate customer trials and not provide a permanent alternative to outright purchase. So, expect the subscription tenure to be short, maybe one to three months.

Hyundai unveiled the 1930s era-inspired Prophecy electric vehicle concept in March 2020 as a precursor to the Hyundai Ioniq 6.

Hyundai calls this the Ultimate Automotive Form, built on the E-GMP with its extended wheelbase and short overhangs, featuring a boat-tail line. Since Prophecy supports autonomous driving technology, you will not find a steering wheel but two joysticks to control the direction. The car also has a ‘Relax mode’ where the dashboard swivels down and a pillar-to-pillar display comes alive to be enjoyed by the passengers. Some of these features may not be expected on the Ioniq 6.

Summary of Luc Donckerwolke’s comments on the Hyundai Prophecy Concept

Whether the profile of the Prophecy (and the Ioniq 6 that it foreshadows) reminds one of a Porsche will be up for debate. Expect more details on this page as test prototypes hit the road.

What is the Ioniq 6?

The Ioniq 6 is Hyundai’s next-generation sedan design, an electric car that will launch in 2022.

What are the main features of the Ioniq 6?

What is the range of the Ioniq 6?

The Hyundai Ioniq 6 is expected with a range of over 500 km (WLTP) with 80 percent charging possible in 18 minutes.

Hyundai plans to launch a new A-segment electric car like the Dacia Spring. 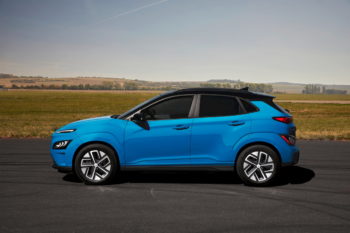 Could the Hyundai Kona EV, which is a hero in its own right for making long-range electric vehicles affordable, become a thing of the past?

Update – Specification sheet and observations from media review added to the story.