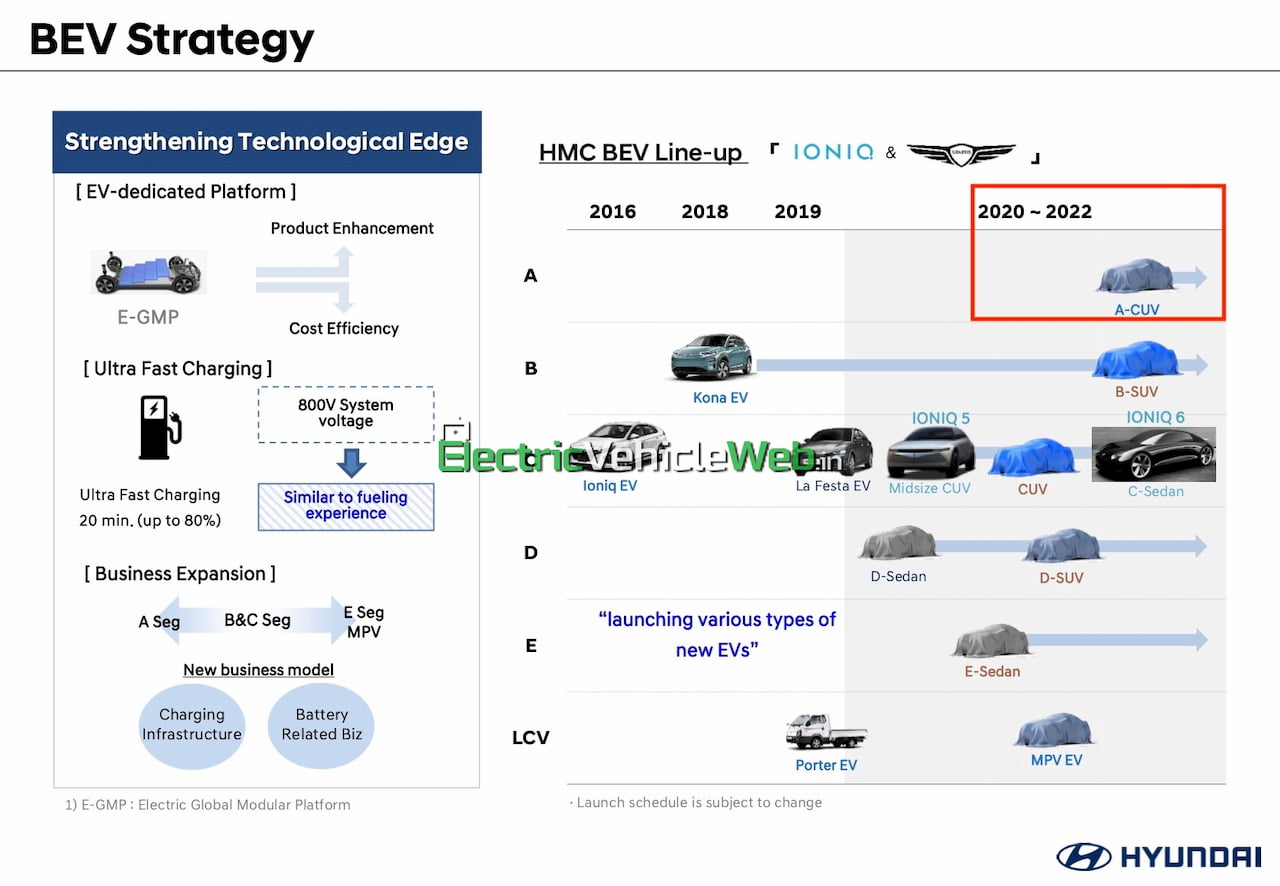 All indicators point toward the first sub-INR 10 lakh Hyundai electric car in India being an SUV, we had reported in February. Now, ElectricVehicleWeb.in can exclusively confirm the same with Hyundai’s latest future product roadmap serving as the proof.

India’s SUV frenzy is real, so much that the most basic car segment now has SUVs (Renault Kwid and Maruti S-Presso). In a slightly higher class, micro SUVs have started gaining popularity. Two of the three micro SUVs, namely the Mahindra KUV100 and the Tata HBX are receiving an EV variant. A Maruti micro SUV style electric car based on the Wagon R is also in the making, scheduled for launch in 2021. Earlier today, we covered a total of 6 sub-10 lakh electric SUVs to launch by end of 2022.

On the Platform, Features & Price of the Hyundai Electric Car

Foreseeing the upcoming EV trend in India, Hyundai Motor Group (HMG) has planned a micro-SUV as its first budget Hyundai electric car. As Hyundai has not confirmed an e-GMP vehicle below the Ioniq 5, like rivals from Maruti Suzuki, Tata Motors and Mahindra, the budget Hyundai electric car would be a derivative of an ICE platform without any of the expensive or advanced features with respect to travel range or charging times. It would be a lower voltage platform and given that it would have an ICE twin, the investment would be much lower and the business case would work even for limited demand.

According to the official document pictured above, HMG intends to launch the Hyundai electric micro-SUV by 2022. Taking into account the COVID-19 outbreak, expect the Hyundai electric car to be ready by the end of that year. The company will price the electric micro-SUV from under INR 10 lakh (ex-showroom) to prove as a serious alternative to petrol-powered crossovers and hatchbacks which are used primarily for city commutes. The Hyundai EV would be an ideal second vehicle in the urban household.

The Hyundai micro SUV will be part of the Smart EV project, which likely includes at least three low-cost electric cars – all developed exclusively for India and developing markets – and emerge starting in 2022. Expect a real world range of at least 200 km from the budget electrics, as they are still two years away from entering showrooms and lower battery prices and technology evolution would make such a configuration achievable. Hyundai may put a stronger focus on performance compared to Maruti Suzuki and Mahindra, as history has shown in the case of its ICE range.

EVW spoke about the low-cost Hyundai electric car plan with Mr Tarun Garg, Director of Sales, Marketing and Service, Hyundai Motor India, at the Auto Expo 2020. Responding to a question we posed: Wouldn’t it be obvious that the affordable EV would be in the trending SUV body style, targeting the aspirational urban buyer who perceives SUVs as a premium vehicle, Garg, without confirming the electric car’s shape, had said:

Our Kona is already an SUV, and yes, the current trend is moving towards SUV. At the same time, we are still studying the market; the Indian market is very big, and there are preferences for many body types. We definitely have leadership in SUV, but as a complete carmaker, we have to look at each and every segment and try to take an opportunity wherever it exists. This is how we look at the market. Our engineers are working on the technology part, and we would really like to give a product where we can get into the consideration set of the customers who says yes I really want to buy an EV, I can afford it, drive it and do well for the environment.

For well-to-do buyers who wish to switch to zero emissions, Hyundai India offers the Hyundai Kona Electric and is considering the niche Hyundai Nexo. The company showcased the fuel cell electric vehicle at the Auto Expo 2020, and had said it was studying the case for sales in a small volume when a skeletal infrastructure for hydrogen dispensing was available.