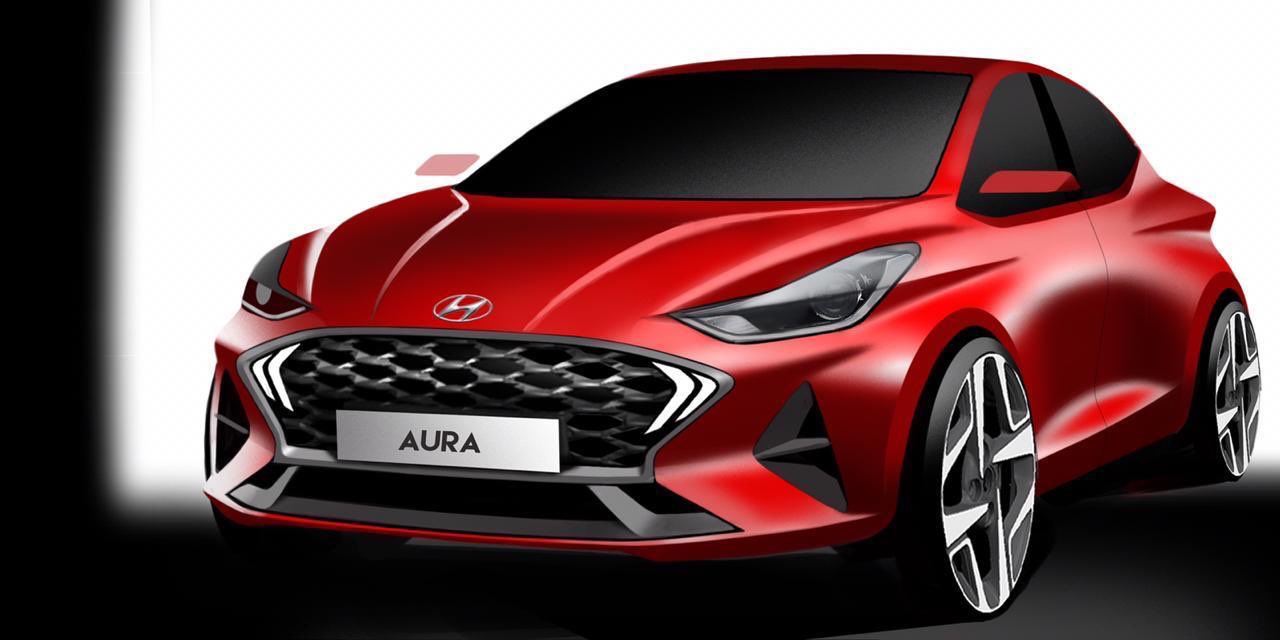 Ahead of its world premiere on 19 December, official sketches of the Hyundai Aura have been revealed that preview the front and rear of Hyundai’s second generation compact sedan.

The Aura is a notchback version of the Grand i10 Nios and from what is observable, has the basic design formula up until the C-Pillar, which is followed by a raised boot. The running gear, panels, wheelbase, front shell, and even the interior for that matter, is common to make the derivative inexpensive to manufacture. The notable difference to the interior is the movable headrests on the bench, a thoughtful addition as sedan customers see rear occupants frequently.

While competitors Tata Motors (Tigor EV), Mahindra (eVerito) and Ford (with the upcoming Aspire-based EV) all improving their offerings, it would lead one to think that the Hyundai Aura EV is an evolutionary second step, but that isn’t so.

As per reports earlier this year, Hyundai HQ has green lit a massive electric vehicle program for India under the “Smart EV” project which will ring in a dedicated electric vehicle architecture for the Indian market. While timelines are not concrete, the affordable Hyundai electric car will not roll out before 2022. Hyundai is currently reaching out and discussing with suppliers for components, and these are understood to be a completely different base compared to the IC engine car vendors. The Tamil Nadu Government’s Cabinet of Ministers had in January 2019 approved an INR 7,000 crore investment by Hyundai. The funds are earmarked for capacity expansion at the plant near Chennai and introduction of electric vehicles, as per media reports.

EVs produced by this program will purely be mass-market models, and it is speculated to have at least one SUV member. Sales will be targeted at personal car owners before moving to fleets. Hyundai’s first EV, the Kona, a CKD pack, priced close to INR 25 lakh, puts it way out of reach of the average car buyer. The Smart EV project, though not announced officially, will target high localization to bring the price of the electric cars below INR 10 lakh.

The dedicated architecture can mean better space efficiency, aerodynamics and weight saving to give it an edge over competitors which are just electrified gasoline-powered cars. Developed from the ground up as an EV platform, it should allow the vehicles to carry a distinct design language, higher safety and good handling. We believe Hyundai would prefer introducing a superior electric sedan on the new platform when the market is ripe as opposed to hastily shoehorning a motor and a battery to the Aura.

Hyundai and Kia, in March, announced an agreement to invest $300 million into taxi aggregator Ola. The plan is to develop fleet and mobility solutions and build India-specific electric cars and infrastructure. Hyundai has also pumped money in car rental company Revv.