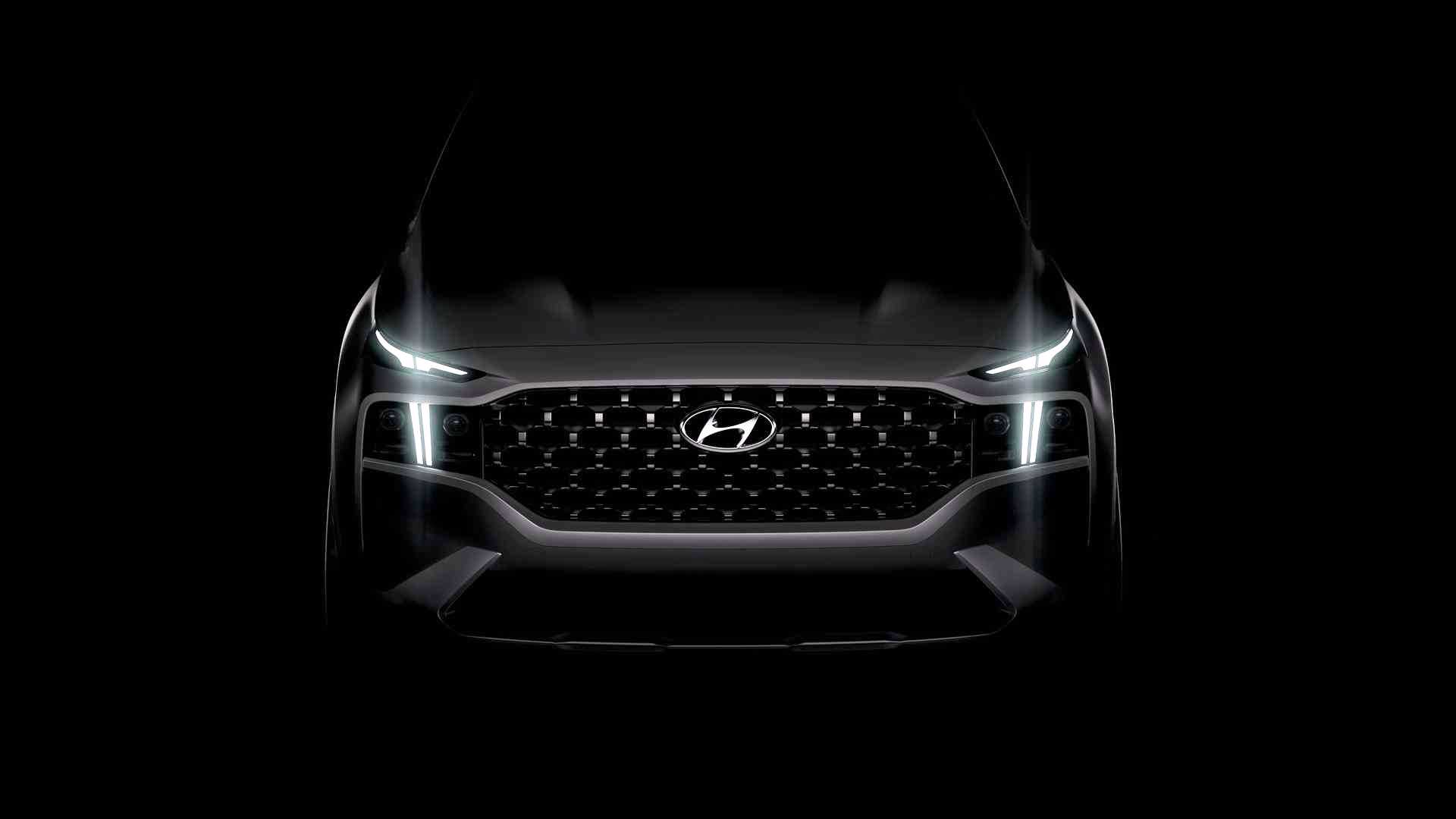 The Hyundai Santa Fe has been one of the most popular and longest selling models for Hyundai. The first-ever Santa Fe was introduced all the way back in the year 2000, named after a city in the United States. Ever since, Hyundai Motor has sold four generations of the Santa Fe SUV, across many countries in the world including India where the second and third generations were sold. For the mid-cycle action of its fourth generation SUV, Hyundai Motor has revealed a picture teasing the potential updates. The Santa Fe SUV for the 2021 model year will also receive significant updates to its powertrain and platform.

The facelift to the existing fourth-generation Santa Fe will have changes made to its interior, exterior and powertrain. On the outside, the 2021 Santa Fe gets a more pronounced grille which extends all the way to the edges which adds aggression to its fascia. Above the grille, the daytime running lamps are housed in a way that follows Hyundai’s current design language. The daytime running lamps have a distinctive hammer shape to it which extends till the bottom of the grille. These design cues give the new Santa Fe a very distinct look.

On the inside, the Santa Fe is said to get updates to enhance comfort and to make the cabin feel more premium. Abiding by current trends, we expect changes in the infotainment system as well as the introduction of new safety features. The current generation of the Santa Fe features some advanced and high-tech features. The fourth-generation model, introduced in 2018, features Hyundai’s latest SmartSense technology. This ranked it as the safest SUV in its class and it was awarded the highest five-star safety rating in the Euro NCAP safety test. Hyundai’s vision for safety is prominent as they offer a Rear Occupant Alert system, an industry first which was designed In-house. It uses ultrasonic sensors to detect movement of passengers, mostly aimed at children and pets in the rear seats and alerts the driver when he leaves the car to check. It also has creature comforts like Heads Up Display and touchscreen infotainment system, all of which will be carried forward.

The major news comes in the form of the new powertrain options. For the first time, the Sante Fe will come with an option of a Hybrid as well as a full Plug-in Hybrid version. This is a very relevant update as most cars in its class have opted with Hybrid options and it helps it stay competitive in the SUV segment. It generates fewer emissions and helps Hyundai comply with new emission laws. The 2021 Sante Fe is based on a new third-generation platform which will significantly enhance the performance, safety and comfort aspects of the car and it will be the first Hyundai offering in Europe based on this new platform. The new Santa Fe will be available in Europe from September of 2020 and we will hear more on the new powertrains in the following weeks.

After two generations and 7 years of sales, Hyundai discontinued the Santa Fe nameplate in India around September 2017 but we heard one official say recently that the new generation is under consideration for India as the company hopes to have a full range of vehicles. HMIL needs to step up localization to achieve an aggressive price and derive any meaningful volumes from the flagship SUV if it indeed is mooting a relaunch.

Update – The ship carrying the first lot of the units of Ioniq 5 is now on UK shores.