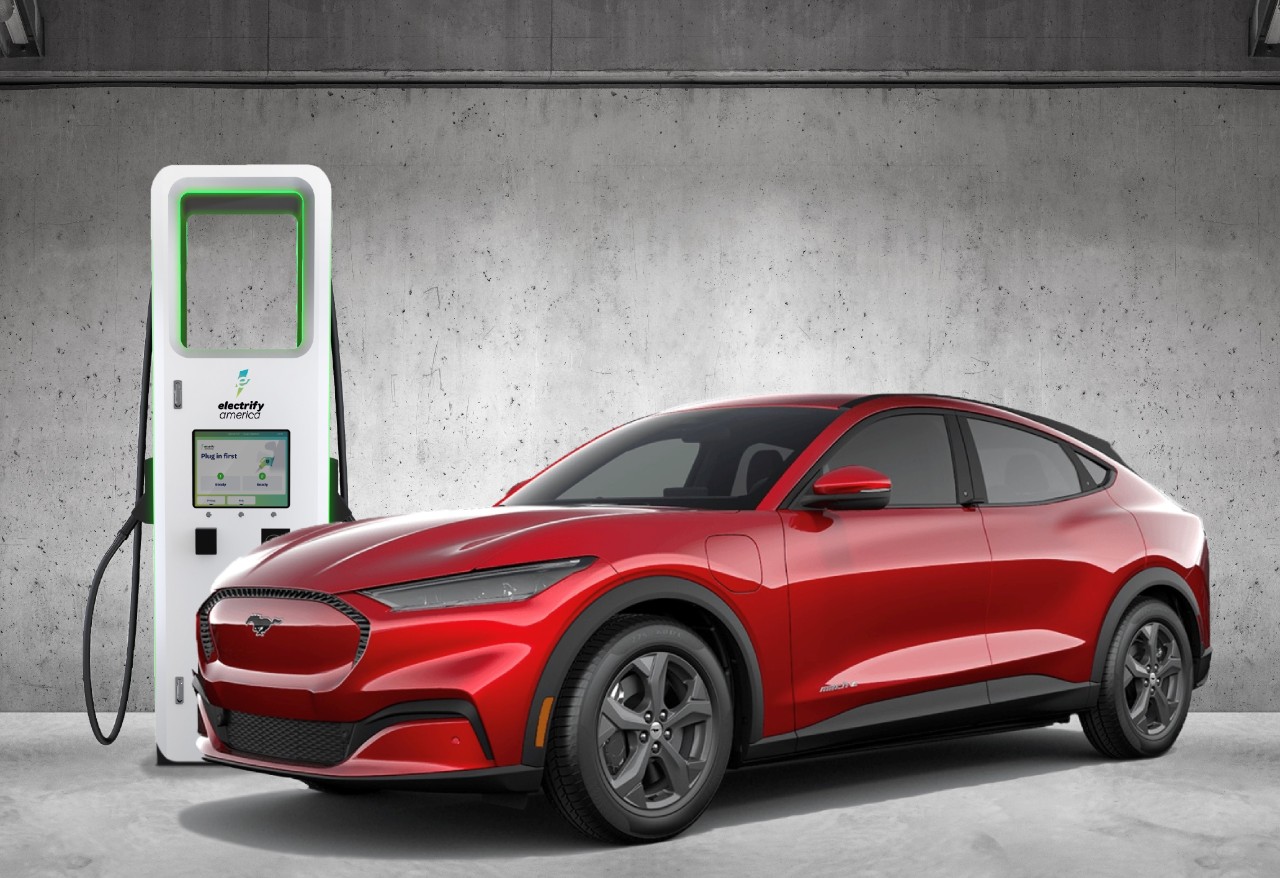 This page provides the latest update on the Mustang Mach-E that will be delivered to customers in the USA from late-2020 and in Europe from early-2021.

Some GREAT new pics of the Mach-E in Grabber Blue!!! 😍https://t.co/nXhSQ6IxtM pic.twitter.com/y1afWf53oQ

To offer a peace of mind to its customers on range anxiety, the Mustang Mach-E comes equipped with Intelligent Range feature that helps in accurately calculating how much driving range is left. The Intelligent Range calculates the range based on the past driver behaviour and weather forecast in determining how much energy will be used in future driving. The feature also considers the type of weather (colder or warmer) that can impact the range and updates the estimated range during the journey.

Apart from the vehicle speed, terrain and climatic conditions, the Mustang Mach-E gathers data from other connected Ford vehicles from customers who choose to share information on the road to improve range estimates. Customers will continuously receive notifications of new range estimates if the range is impacted, says Ford.

If their Mustang Mach-E runs out of charge, Ford is also offering Ford Roadside Assistance program to tow customers free of charge within 56 km, to their homes or nearest public charger or EV-certified dealer Ford dealership. Ford will be updating the Intelligent Range with over-the-air updates to improve the technology further.

Ford will be equipping the Mustang Mach-E with a Ford Mobile Charger that can be used with a 120V or 240V outlet for charging. Customers who want faster home charging can opt for the Ford Connected Charge Station home wallbox that will be available with prices starting at $799 MSRP excluding tax. The wallbox can be ordered through call, or dealership or on FordParts.com to get them delivered ahead of the vehicle or customers can order and finance the home charger along with the car purchase to be delivered with the vehicle.

Looks like the Ford Mustang Mach-E will feature many improvements even before its launch. Following information from an enthusiast forum about the hike in power and torque outputs (scroll down for the table) Ford said yesterday that users would be able to charge their vehicles faster.

Testing has shown that the charge time has improved by about 30 percent. It is now possible for a Mustang Mach-E owner to add an average of about 61 miles of range in 10 minutes using Electrify America’s DC fast charging station on the extended-range battery & rear-wheel drive variant and 52 miles of range in the extended-range battery & all-wheel drive variant. The standard battery version in 2WD and AWD can now get 46 and 42 miles respectively for 10 minutes worth of charging.

Ford says charging a Mach-E at home is simple as plugging in a smartphone. The 48-amp Ford Connected Charge Station can charge a Mustang Mach-E in 10.1 hours or 30 miles per charging hour.

Ford has announced that the Mustang Mach-E will be able to stay updated without having to visit a Ford touchpoint thanks to the OTA capability that allows the owners to update their Mach-Es anywhere with internet.

OTA updates allow companies to improve the software, add more features and fix bugs among other things without the need of the customers to visit the service centre. Ford has said that customers can schedule the time for the updates to be installed and if the vehicle is in use when an update is ready, the system will install the update in the background without disturbing the current software or operations. OTAs are not new to EVs as Tesla has been relying on them for continuous updates and improvement of its products.

The launch of the Ford Mustang Mach-E is expected towards the end of 2020 in the United States and the flagship GT models will be added to the lineup in 2021. The vehicle is reportedly en route to India as you will find out later in this story.

Amid the coronavirus pandemic, engineers of Ford Motor Company are fighting hard to keep the Mustang Mach E’s launch this Fall on track, and by the looks of it, there could be a few nice surprises.

As the Mustang Mach-E gets closer to production, Ford appears to have bumped-up the power and torque of the electric SUV. The change in motor outputs is listed below variant-wise, as per the material uploaded on the Mach-E forum.

Ford engineers in ‘Team Edison’ are fine-tuning the software of the car working from their homes with the prototype vehicles that they have with them. The team is working on the electric SUV’s final evaluations in its software and sharing the findings through the company’s cloud. Through remote access to their work tools, the development team is intent on fine-tuning the electronics and the software to gather all possible data and collaborate through video conference to ensure the timely rollout of Ford’s first real Tesla challenger.

Earlier this month it was speculated that Ford could have sold-out the Mach E’s first year production as bookings have touched 50,000. Ford has stated that all units of the ‘First Edition’ variant have been spoken for, and maintains that other variants are up for grabs. The economy of the United States has witnessed an unprecedented plunge due to the prolonged COVID-19 shutdown and it remains to be seen how many customers change their minds about buying a new car this year given reports that an unemployment crisis is unfolding in the country.

Below is the video of the Mustang Mach E demo from the recent Portland International Auto Show shot by Youtuber Christopher Holmquist where the presenter demonstrates the important product features.

Ford has released footage of the Mustang Mach-E AWD testing in the snow. The Blue Oval has stated that the AWD variant is in high demand in the USA market specifically in the northern and Midwestern states. Almost 75% of the bookings are for the AWD variant at this point.

Instagram account Mustangshow has uploaded a short clip of the Mustang Mach E from one of its test runs in Markham, Ontario.

Pictures have surfaced of pre-production Ford Mustang Mach-E cars rolling off the assembly line in Mexico, courtesy of the Facebook page of Ford Motor Company Cuautitlan Stamping and Assembly Plant.

The picture shows the Mustang Mach-E in its production or pre-production form at least as Ford has stated that series production will begin only during Fall 2020 (late-2020). The model here could be to test the tooling, stamping and other production processes. With the Mach-E extended range version that offers 480 km, Ford has the Tesla Model Y in its cross-hair.

At a DC fast charging station, a standard range Mustang Mach-E can be charged from 10 per cent to 80 per cent in 38 minutes. Mach-E extended range and rear-wheel-drive combination can be charged to return a range of 75 km in just 10 minutes using a 150 kW charger.

It is reported in the media (before the COVID-19 pandemic) that Ford will introduce the Mustang Mach-E in India in 2021. Despite limited sales, the Mustang nameplate is extremely popular among enthusiasts and Ford has lined up shared-mobility EVs (such as the Ford Aspire EV) with through the Mahindra-Ford joint venture company (the vehicles are to come off the MESMA 350V platform), reasons that convince us that the Mach-E is a ‘must’ for India from the standpoint of a brand shaper and testing Indian consumer response to a Ford electric car before going full-on with its EV plans.

TFLcar.com, citing an insider, is reporting that the Ford Bronco Hybrid would get the company’s twin-turbo 3.0 V6 Ecoboost engine. The hybrid SUV would employ the company’s 10-speed modular hybrid transmission.