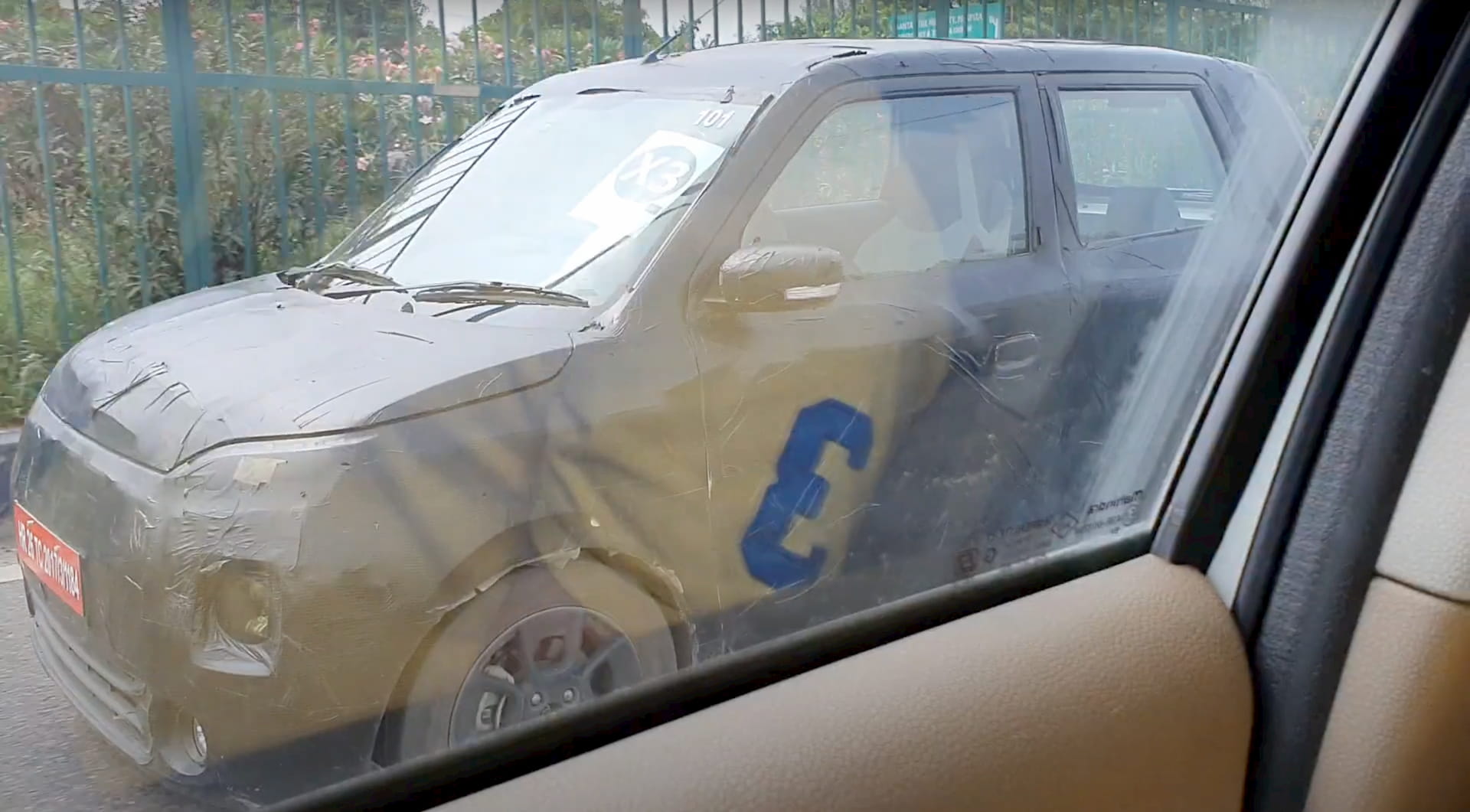 Maruti Suzuki flagged off the first prototypes of the Japanese Wagon R-based EV in 2018, and in 2019 it built prototypes based on the Indian Wagon R, extensively testing them on the roads. Meanwhile, top company executives had been expressing concern to the media about the commercial feasibility because of the expected base price computing out to be above INR 10 lakh. That has become one of the two main reasons for the cancellation.

Maruti Suzuki dropped its first electric car project because of “techno-commercial viability issues”, as per the report. A Toyota electric car for India was going to be derived from the Maruti EV, and that project meets a similar fate.

Imported parts for the Maruti electric car were proving to be costly, and the localisation would take a long time, people in the know of developments at Maruti Suzuki told ET Auto. Maruti Suzuki generally doesn’t launch low-volume cars that do triple-digit figures a month, and that’s what this model would have been if the price was wrong.

Behind the scenes, TDSG is quietly setting up India’s first Lithium-ion battery manufacturing plant and is likely to start operations in a few months. A JV between Suzuki (50%), Toshiba (40%), and Denso (10%), TDSG would allow Maruti Suzuki to build strong hybrid (full-hybrid) cars at a lower cost. The upcoming Lithium-ion battery plant in India is located at the Maruti Suzuki Supplier Park in Ahmedabad (Hansalpur), Gujarat.

The first Maruti EV in India now may not arrive anytime before 2023, and by that time the supply chain in India for electric cars could get stronger, battery price would have fallen further and the charging infrastructure would be more visible. Given the trend in the industry, Maruti Suzuki may choose an SUV-based EV instead of a hatchback as its first electric car.

Below is everything we knew about the Maruti Wagon R EV:

Maruti Suzuki was expected to start electric car production in 2021, eyeing a small sales volume initially to select customer groups. Sales could have begun with fleet customers, like cab aggregators and government bodies (like EESL), and seen the addition of individual customers for personal mobility a few months later.

The Maruti Wagon R electric was to sport a split-design headlamp layout with projector units and likely to include LED daytime running lights, a closed grille, and a heavily designed bumper. The test mule was seen fitted with black alloy wheels that one gets in the Maruti Ignis. Maruti was expected to also give unique LED detailing to the rear combination lamp, touches it would have hoped to provide adequate visual distinction from the petrol car.

Maruti previewed the design language of its next-generation line of vehicles using the ‘Futuro-E’ concept at the 2020 Auto Expo. It must be noted that the company has displayed several electrified vehicles in the previous editions of the show, including the Eeco ‘Charge’ and the SX4 Hybrid, though not intended for customers. None of these concepts have a direct connection to the Wagon R.

The interior of the Maruti Wagon R EV (identified by the different looks and the lack of an exhaust tip) was captured for the first time by startup 91Wheels.com in Delhi-NCR earlier in 2020 and had revealed key features of the cabin. In 2019, reports had said that these test mules were of the upcoming petrol-engined ‘Maruti XL5’ to be sold via the NEXA dealership chain, which was incorrect.

Parts like AC vents, seat upholstery design and multi-function steering wheel were borrowed from the latest gen Wagon R which came out in January 2019. The Maruti Wagon R electric would have had the same 7.0-inch infotainment system (SmartPlay Studio) that supports Android Auto and Apple CarPlay. The Maruti Wagon R electric was expected to feature an automatic climate control feature that is not available in the petrol variant.

The gear selector module had a setting marked as ‘B’ which, according to 91Wheels, denoted the Brake Regeneration function. Brake Regeneration charges the battery while braking or when you take the foot off the accelerator pedal, in turn, increasing the driving range of the car. This feature is the most effective in city driving when the stop-go scenario is experienced frequently, and car companies offer different levels that can be selected based on the driver’s requirement of range vs. driving smoothness.

The Maruti Wagon R EV, with a real-world range of 130-180 km/charge and DC fast-charging capability (80% capacity achieved in an hour), was expected to be launched in the first half of 2021 at under INR 10 lakh (ex-showroom). The cost of the vehicle was expected to come down if a localization program was pursued aggressively and EV-type Li-ion batteries were made at Suzuki’s new battery plant in Gujarat. The plant which will specialize in batteries for hybrid cars, is being currently built, in partnership with Toshiba Corporation and Denso Corporation, and will be inaugurated in a few months.

The Mahindra eKUV100, which will go on sale in early 2021, is India’s most affordable electric car to-be, with a price of INR 8.25 lakh (ex-showroom Delhi, incl. FAME II subsidy). State governments are rolling out big incentives for EVs, and so, it might be cheaper in some places. In Delhi, for instance, electric car buyers in 2020 received up to INR 1.5 lakh EV subsidy in addition to the FAME II EV subsidy of Rs 10,000 per kWh. As per the Delhi Electric Vehicle Policy 2020, there is no road tax on electric vehicles.

Talking to The Hindu Businessline (TheHinduBusinessline.com) in August 2020, RC Bhargava, Chairman, Maruti Suzuki, had said there is no plan at the moment for the launch of a Maruti Wagon R electric. Bhargava had said that the market is hardly appropriate for the sale of small electric cars in India in large volume.

Bhargava asked that while a large EV owner has a driveway or a garage where the vehicle can be charged, how a small car owner who parks his vehicle on the roadside would be able to charge his vehicle. He said big car owners could have multiple vehicles and can have an EV also, but a small car owner does not have the luxury.

In May, Bhargava had said that Maruti Suzuki is predicting a positive market response for fleet sales of its upcoming electric car in India, but it seemingly wasn’t sure about achieving high volumes for the same from individual customers yet.

Bhargava had stated that the customer is either going to make or break e-mobility and will buy an electric car only if he or she finds it to their benefit. He had cited that influencing the workability of EVs are affordability, ease of ownership, and battery technology. Bhargava had indicated in 2018 that the Maruti Wagon R EV would not come for the personal mobility segment initially.

From the different interviews of top Maruti officials that have appeared in the press, it can be surmised that Maruti has had questions lingering about the customer-friendliness of electric vehicles. The lack of proper charging infrastructure (that has to be supported by the government) is a big concern and the limited range that batteries provide at the price point of the Indian mass-market car today is causing uncertainty.

Maruti Suzuki announced at the Auto Expo that it is planning production lines to pump out a million ‘green’ vehicles in the next couple years which includes CNG, mild hybrids, strong hybrid as well as electric cars in India under the Maruti ‘Mission Green Million’ activity.

When asked at the Auto Expo 2020 about how Maruti plans to tackle the Real Driving Emissions test and new CAFE norms coming up in the next three years, CV Raman, Senior Executive Director, Engineering, Maruti Suzuki, said it wasn’t depending only on pure electric cars to meet new regulations and customer aspiration:

CO2 targets are becoming more stringent, and of course emissions in terms of RDE is also coming. Our communication today is about Mission Green Million, that we have done in the last decade one million (units of ‘green’ vehicles) but in the next couple of years we want to do a million units. And we want to have technology-agnostic approach using CNG, Smart Hybrid 12V technology, Strong Hybrid and we want to develop the ecosystem for the EV.

So that’s the direction in which we believe we should move which would be beneficial for India, and from a customer point of view – what is the acceptance level and what price points they would be looking at. We are a volume manufacturer, we believe in scale, which brings down the cost. So it has to be a marriage of both these things going forward, and yes you will see a lot of these technologies.

When is the launch of the Maruti Wagon R EV?

The launch of the Maruti electric car reportedly has been cancelled.

What is the price of the Wagon R electric car?

Maruti does not plan to launch the Wagon R EV as it finds it expensive to build the car with imported parts, says ET Auto.