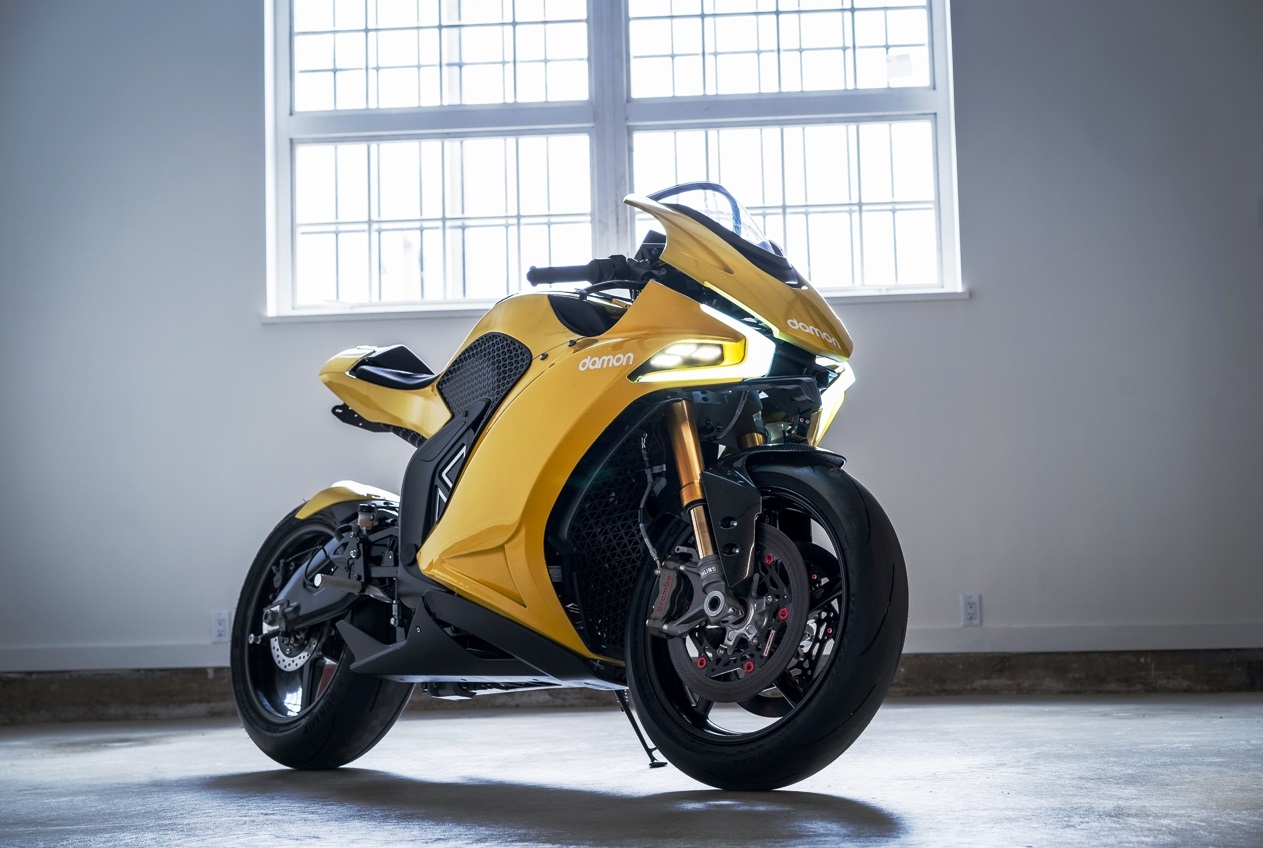 Update – Damon Motorcycles has announced two limited edition Hypersport Premier motorcycles – Midnight Sun and Artic Sun that are available for pre-order immediately. Details updated under the sub-heading at the bottom of the story.

Vancouver-based startup Damon Motorcycles whose mission is safer and smarter motorcycling is looking at serving customers in the Indian market. The company, which has just unveiled and announced pre-orders of its first production electric motorcycle, has spent the last three years developing an AI-powered, fully connected, e-motorcycle platform that incorporates ‘CoPilot,’ its proprietary 360º warning system.

When ElectricVehicleWeb contacted Damon to learn if the HyperSport would reach India, we were told:

We will be shipping (the Hypersport) to North America first. If India shows a large interest in high volumes, then we may also ship into India. If there is a special request for importing, we can discuss on an individual basis.

Damon’s flagship model, the Hypersport also received the “Best in Innovation” award at the CES 2020. It was unveiled on January 7 at the event equipped with the aforementioned CoPilot advanced warning system, which will be powered by Blackberry’s QNX technology. CoPilot system uses a mix of radar, cameras and non-visual sensors to track the speed, direction and velocity of moving objects around the bike, effectively providing a bird’s eye view of possible threats to the rider. The design of the system is to improve the awareness of the biker without taking away his focus.

Damon Hypersport unveiled at the CES 2020

It’s alive!! Pre-order your Hypersport at damonmotorcycles.com and get on the waiting list now damonatCES #CES2020 #futureofmotorcycling

The specification sheet makes for impressive reading with a 20 kWh battery pack powering a 150 kW motor (200 hp), taking the bike to a top speed of 322 km/h. The company is claiming a range of 322 km in the highway and 483 km in the city. It is fair to say that the Hypersport is the crème de la crème of the electric motorcycle segment.

The sales plan of Damon Motorcycles is to start with deliveries of the limited-edition Hypersport model next year for USD 40,000 (INR 28.55 lakh), followed by the standard Hypersport variant priced at USD 24,995 (INR 17.84 lakh). While we haven’t heard this from the company, it certainly wouldn’t be wrong to expect more affordable bikes in Step 2.

With growing interest in Damon Hypersport Founder’s Edition, which is sold out, the company has announced the limited edition Hypersport Premier motorcycles. Available for pre-order now, the Hypersport Premier models are available in two exclusive shades – Arctic Sun and Midnight Sun. Like all Hypersport models, the Premier range will produce over 200 hp and 200 Nm of instant power and torque respectively, along with a riding range of over 320 km and a top speed of 322 km/h.

Priced at USD 39,995, the Hypersport Premier comes fitted with Damon’s trademarked CoPilot advanced warning system, single-sided swingarm, premium brakes and suspension. The Arctic Sun and Midnight Sun can be reserved for USD 1000 at the company’s website till stocks last. Damon Motorcycles has announced that they have acquired the IP portfolio of Mission Motors, which will give Damon access to cutting-edge technology including the PM200 electric motor, Mission Inverter and Skyline Telematics.

In related news, Italian performance bike maker Energica is also looking to enter India to expand its global sales network by early 20201. Energica has three models in its portfolio – EsseEsse9, Ribelle and the Ego.