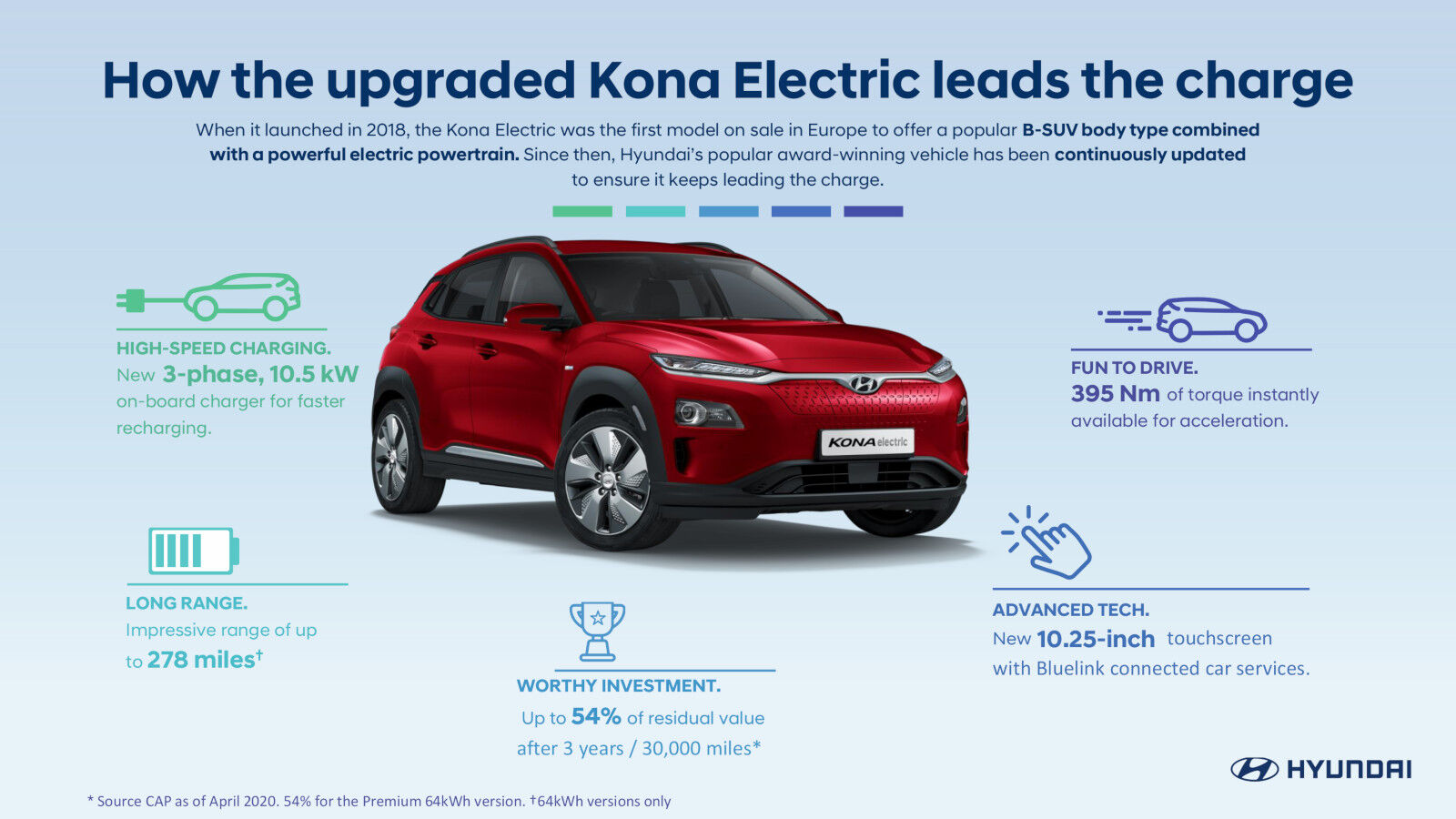 Electric cars have started to catch on in the last 3-4 years in the global marketplace, but the current decade would be remembered as the period when mass adoption occurred rapidly as automakers have started investing in the billions of the dollars to bring out dozens of products with a long range (500 km in the case of the new Skoda Enyaq), exciting features (like Augmented Reality Head-Up Display in VW ID products) and in different shapes (the Hyundai Prophecy next year is set to redefine a sedan). However there are misconceptions about electric cars that stop more people from buying them and Hyundai wants to bust those myths. Parts of the following article are from Hyundai UK, and we’re adding remarks in the Indian context below each point.

No, they don’t; not anymore. Battery technology has come a long way from where it was 10 years ago. Improvement in power density without increasing the size of the batteries has helped companies to offer more range. Hyundai Kona Electric’s 64 kWh battery version offers a range of up to 484 km per charge which is more than enough for city commutes and also long intra-city trips if you plan it properly. In India, Hyundai offers the Kona Electric with a 39.2 kWh battery with a 452 km range (ARAI). There are cars that offer much less range but those are built for that purpose; for short trips within the city.

In India the era of long-range EVs started with the launch of the Hyundai Kona last year, and the Tata Nexon EV and the MG ZS EV this year, all of which have a range in excess of 312 km in the ARAI test. Mahindra will take it up a notch with 370+ km range promised with the eXUV300 that’s due in mid-2021, whereas Tata Motors will keep improving the ZIPTRON technology for increased range and performance, it was confirmed last week.

Myth 2: Electric Vehicles are too expensive

Not really if you consider the amount of savings. EVs are considerably costlier than the ICE cars to buy but the price gap is decreasing consistently. The total cost of ownership is much lesser for EVs as there are government subsidies, lesser running cost and much lesser maintenance. Studies have shown that EVs retain better value of their original cost over the years. With lesser components in the car, EVs are much easier to maintain and there have been many examples of car owners getting Rs Zero bill for service with Hyundai Kona Electric. Hyundai is also offering an 8 year/160,000 km warranty on the battery, which is the case with the Tata Nexon in India as well.

In India, sure the Nexon, MG ZS and the Kona are not exactly cheap in acquisition cost, but the price difference between say a Tata Nexon diesel AMT (the most fuel efficient ICE automatic variant) and a Tata Nexon EV is bound to further shrink with each model update. This is due to the fall in price of the battery as many companies (starting with Suzuki & TDSG) would be manufacturing battery cells in India and companies such as TACO would be localizing the motor. Then there’s the price of diesel cars that have constantly increased due to the government regulation (such as BS6 which has added about INR 1 lakh to the price of a BS4 version) and the expensive price of fuel.

Myth 3: There are not enough places to charge an Electric Vehicle

Agreed that India still has to get a wide network of EV charging stations but with most of the daily commute covered well under 100 km, you don’t need to worry about running out of charge in the 2020s. Kona Electric’s range of 452 km (in India) should be enough to handle your daily transport needs for at least 5 working days, theoretically. The 39.2 kWh battery takes 6 hours and 10 minutes to be charged to full capacity with a 7.2 kW Level-II charger that can be done overnight. Then there are plans announced by the government and private players to increase the number of charging stations. While players like Tata Power are working on installing 700 charging stations by next year, the government is setting up of 2,636 charging stations (of which 1,633 would be fast-chargers) in 62 cities.

Myth 4: It is dangerous to charge an electric vehicle in the rain

Like other technologies, EVs have come a long way in technological advancements and safety. The chargers and batteries of EVs are equipped with modern technology and advanced battery management systems that can withstand all weather conditions. Drivers can also charge their Kona Electric in rains without any problems, the company says.

Myth 5: There is no EV on the market to fit my needs

While SUVs are the current trend, the types of EVs to choose from have increased significantly, with models available in sedan, SUV, sportscar and other body styles. In India, Kona Electric was the first long-range electric car to be launched and combined the SUV characteristics with a range that frees drivers off range anxiety. The Mahindra eKUV100 that is to launch this year becomes the cheapest electric crossover at Rs 8.25 lakh. Other electric cars that are arriving within two years to break the Rs.10 lakh barrier are the Tata HBX EV, Maruti Wagon R-based EV, Renault XBA EV, the Hyundai Smart EV crossover and MG’s mass-segment electric car. In the premium end, the Mercedes EQC, VW ID.4, Jaguar i-Pace, Porsche Taycan, Audi e-tron, Nissan Leaf and the Volvo XC40 Recharge would all be available in India by end of 2021.

Myth 6: EVs are not fun to drive and don’t look good

Wrong again. Most EVs are now more powerful with better driving dynamics and look equally if not better than the ICE counterparts. In terms of power, EVs can deliver the power and torque much faster than the ICE vehicles and the placement of batteries in the floor offer a lower centre of gravity, making them better to drive. Hyundai Kona Electric makes 136 PS pf power and 40.27 kgm of torque and can go from 0 to 100 km/h in 9.7 seconds. Most of the EVs get multiple driving modes that you can toggle for range efficiency and performance.

EVs are also better looking with most of them getting a futuristic styling and features. Absence of an engine in the front means manufacturers are no longer limited by the size of the nose section. The VW ID.3 that is sits on the dedicated MEB platform is an example of how designers can change proportions of the car to make them futuristic without compromising interior space. The Kona Electric gets a sleek closed grille, LED lights and aerodynamically optimised alloy wheels while other electric cars due to placement of the battery and motor near the floor, offer an additional ‘frunk’.