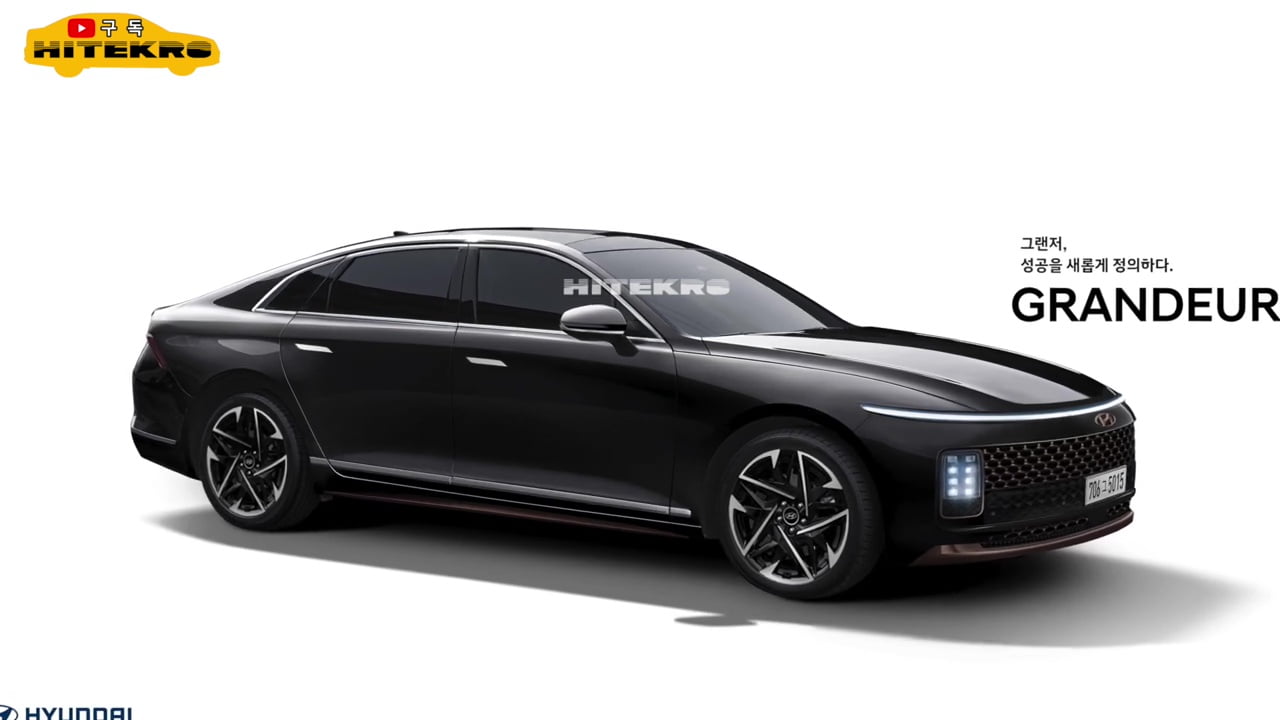 According to a Korean Car Blog report, the next generation 2022 Hyundai Azera (called Hyundai Grandeur in its home market of South Korea) will be a significant step up from the current-gen model to maintain its positioning as the flagship Hyundai model on sale.

While the Hyundai Azera/Grandeur is currently the flagship, its past has been overshadowed by the Genesis G80 from 2016. The Azera occupied a straddling position of a high-end Hyundai, slotting between the Sonata and G80. Hyundai can refocus on the Azera with Genesis products being woven into their brand and migrating to dedicated dealerships. There is a significant price gap between the Genesis and Sonata (the most expensive Hyundai sedan on sale in the USA) of nearly USD 10,000, a wide enough opening for the Azera nameplate to make a comeback, as per reports.

YouTube channel NYMammoth has delivered a rendering of the upcoming Hyundai Grandeur. The sketches (above) hint at a design that looks curvier than the current version of the Grandeur, with sleeker headlamps, bigger daytime running lamps, a sharper grille, black roof and A-pillar, and door-mounted mirrors. This is an unofficial sketch and is not representative of the actual car.

YouTube channel 하이테크로 [HITEKRO] has also created speculative renders of the three-quarters angle of 2022 Hyundai Grandeur, set as the display image of the story. In recent years, Hyundai hasn’t given evolutionary makeovers to cars. The next-gen Grandeur should look nothing like the current Hyundai models, not even the outgoing Grandeur. Staria-inspired front lights and grille and the Ioniq 5-style combination lamps look attractive, but the actual car could debut a new type of design.

The upcoming seventh-generation Hyundai Azera (codenamed Hyundai GN7) will reportedly exceed the 5-meter mark in length, a first in the nameplate’s 35-year history. The Azera is currently sold in chauffeur-driven markets like China, the Middle East, and in its home market in South Korea and select South East Asian countries. Sales have been on the uptick, with over 2 million units sold since its launch in 1986, and for 2020, the Azera (Grandeur) was the best selling car in South Korea for the fourth consecutive year. The Hyundai sedan is standing firm despite the heavy incoming fire from crossovers that have literally conquered every segment.

ElectricVehicleWeb accessed an official document of Hyundai Motor Company of March, which confirms the new Grandeur and Grandeur Hybrid model plan for 2022.

With every redesign, the Azera’s appeal has been broadened, and the target age group gets younger. We don’t see this changing in the next generation, which is expected to pack some of the Palisade’s features. These include the VIP package with wing-type headrests with built-in Harmon Kardon speakers for the rear occupants, rear entertainment screen, temperature-controlled cupholders, a 12.3-inch virtual cockpit, air purifier, a color head-up display, and the Safe Exit Assist which uses radar to detect traffic approaching from the rear and alerts the passenger opening the rear door.

The Hyundai Azera Hybrid variant (S.Korea’s best-selling hybrid car) is certainly in the 2022 model plan. However, the powertrain details are yet to surface. The outgoing model packs a 2.4-liter petrol engine with a 38 kW electric motor. The GN7 could use a more powerful version of the Sonata Hybrid’s 2.0-liter hybrid powertrain or even see a turbocharged PHEV variant.

We’ll have an eye on the progress of the Grandeur/Azera on this page, so be sure to check back later.

‘Le Blanc’ – The last hurrah of the current Grandeur/Azera?

Hyundai Motor Company this week introduced the 2021 model year update for the Grandeur in gasoline and hybrid variants in South Korea, in what may be the last model year for this generation. A special ‘Le Blanc’ trim was announced in the new lineup with expanded safety and convenience specifications.

‘Le Blanc’ in French means ‘white’, and a new combination of beige (seat) and black is added to the cabin of the trim for a distinct appearance.

What are the rivals to the Hyundai Azera/Hyundai Grandeur?

If launched in the U.S., main rivals to-be are the Toyota Avalon and Nissan Maxima.

What is the release date of the new Hyundai Azera?

The next-gen Azera/Grandeur will be launched in 2022, a few months after its unveiling.

What is the expected price of the 2022 Hyundai Azera?