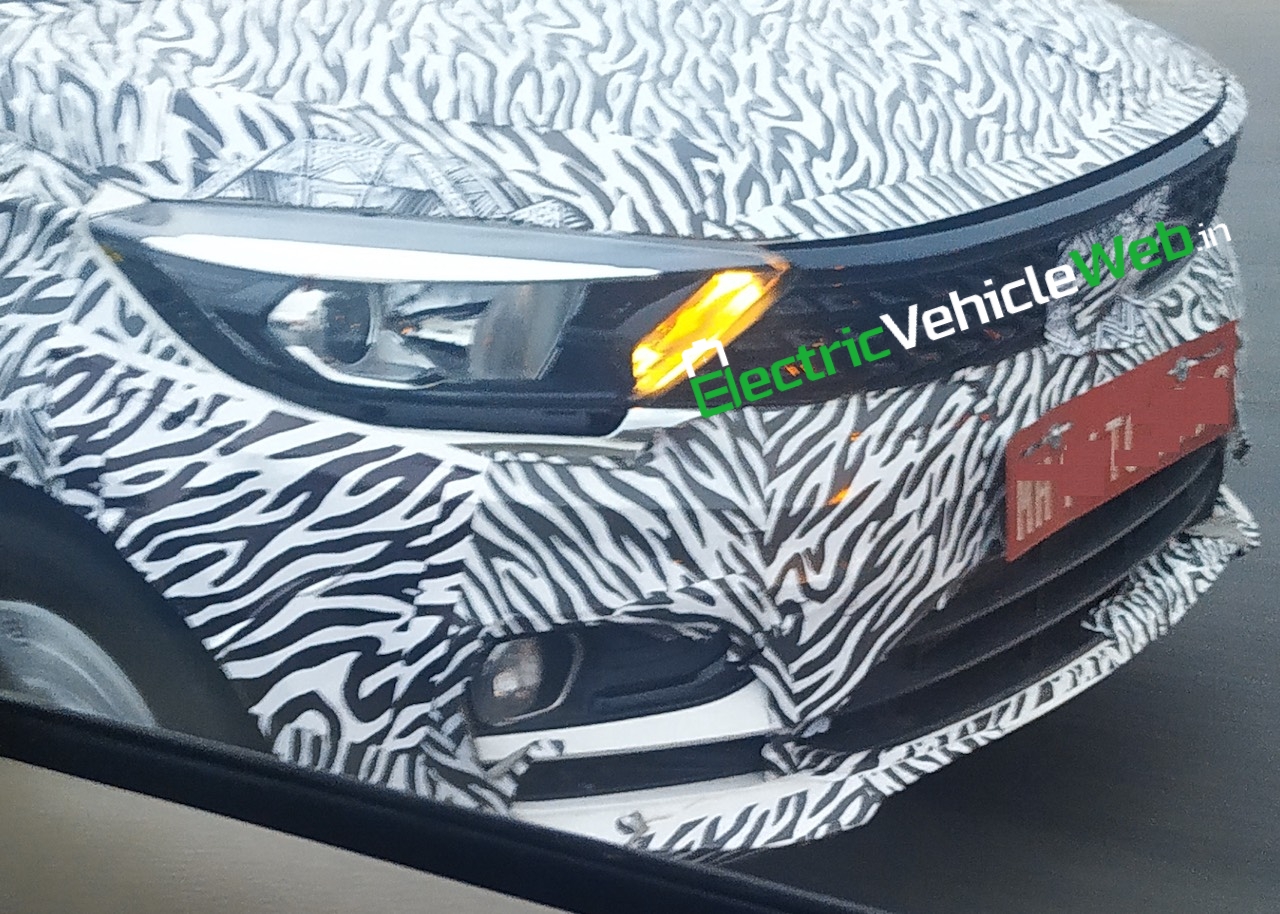 ElectricVehicleWeb.in can reveal the best look yet of the Tata Tigor facelift (2020 Tata Tigor) in this exclusive spy shot sourced from a reader in Pune with never before seen details. The variant spotted is the petrol, and as almost every exterior component is shared with the electric variant, going forward the same must be true of the facelift.

The changes to the front align it with the second phase of the IMPACT design introduced on the Harrier and Altroz that lends an sense of extra length and width to the Tigor’s snout. The design ethos with the 3 ‘Ex’s and the 3 ’In’s which stand for “exciting proportions, expressive surfaces and extraordinary details,” and the 3 In’s which denote the interior’s “inviting spaces, intelligent choices and in-touch surfaces” will be in action on the mid-life refresh of the ‘Sportback’ model.

Pieces that have changed are the raked honeycomb mesh grille, free of chrome, flanked by sleek projector headlamps with the indicators placed vertically on the inside edges. The front bumper is cut differently and the fog lamps have their dedicated housing (currently placed on the edges of the lower intake) complete with the lower grille bars flowing into the enclosures and the contours extending below them. The electric variant will retain touches that imply its Eco-credentials such as the ‘EV’ badge on the grille corner and boot as well as decals on the front doors.

The interior may not have exciting changes as the Tigor received an upgraded 7.0-inch Harman touchscreen system last October (now supports both Android Auto and Apple CarPlay) along with new upholstery in what was a comprehensive overall update. Perhaps the Tigor facelift will download the new steering wheel from the Altroz.

While we won’t go into the powertrain changes of the conventional variants, it is reported that the diesel engine will not make it into the facelift due to the reducing demand and the expensive upgrades it requires to meet Bharat Stage 6 emission norms.

The Tigor was the first Tata electric vehicle that was not just a motor show exhibit and one that could be bought, initially by EESL (government) in December 2017, fleet operators and self-drive companies, and finally private buyers this year.

The zero-emission variant was launched for private customers in June 2019 in two equipment lines (XM and XT) and three body colours – white, silver and blue. Launched at INR 9.99 and 10.90 lakh respectively (ex-showroom Delhi), the Tigor EV drew power from a small 16.2 kWh battery pack that powered a 72 V 3-phase AC induction motor that made just 30 kW (40.2 hp) at 4500 rpm and 105 Nm of torque, sourced from Electra EV. The company claimed a range of 142 km on a charge, but EESL employees that traveled in the car had complained of short range in the early version that reportedly fell well below 85 km for a charge in everyday usage.

Initially, Tata Motors was in some kind of denial, but in October this year switched to the larger battery pack – a 21.5 kWh spec that addressed the issue with an improved range of 213 km (MIDC cycle) while retaining the motor and electronics. The Tigor EV, priced starting at INR 9.44 lakh (ex-showroom Delhi) can be charged to 80% through a standard power socket in about 11.5 hours, with a 15 kW charger taking 2 hours.

With the company’s in-house developed ‘Ziptron’ technology which is far superior in all respects to Electra’s system on the Tigor now production-ready, Tata could think of switching over with the facelift. The Ziptron on the Nexon has a 129 PS permanent-magnet AC motor powered by a 30.2 kWh lithium-ion IP67-rated battery pack. The motor develops 245 Nm giving the sub-4m SUV a 0-100 kmph sprint time of 9.9 seconds. Moreover, Ziptron comes with a warranty of 8 years or 1,60,000 km, superior to the 3 years or 1,25,000 km of the Electra version, and much faster charging times.

Tata Motors will sell over 1,000 electric cars this financial year and if it hopes to double sales next year, the Tigor would play an important part, and would have to get the best and the latest in the connectivity, features and range to attract personal car buyers.

Tata Motors is expected to program the launch of the 2020 Tata Tigor at the 15th edition of the Auto Expo which opens on 5 February for the press.

Also Read: 10 things you may not know about the Tata Nexon Electric car