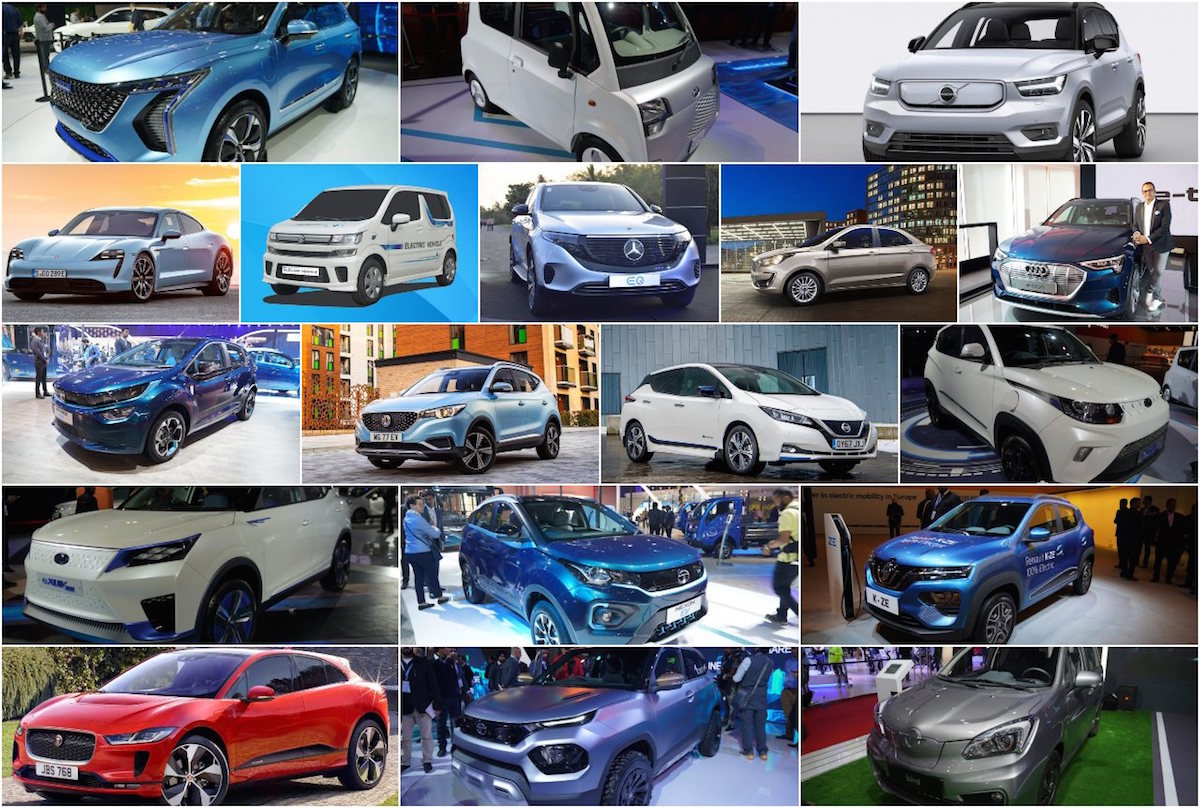 The year 2020 would be remembered as the one that gave vitality to the electric vehicle revolution in India. The Auto Expo 2020 saw the birth of dozens of EVs of different sizes and prices from a wide section of automakers. Let’s have a look at the upcoming electric cars of India to be launched in 2020 and 2021.

Mahindra launched the eKUV100 at the Auto Expo 2020 and has priced the car from Rs 8.25 lakhs (ex-showroom Delhi, post-subsidy), making it the most affordable electric car in India. Mahindra will start the deliveries of the vehicle later this year or early next year. The Mahindra eKUV100 is powered by a 40 kW (53.6 hp) electric motor, producing a torque of 120 Nm and drives the front wheels. The eKUV100 offers a range of 147 km in a single charge and can be charged to 80 per cent in just one hour through DC fast charging. Mahindra has also confirmed that the eKUV100 can be pre-cooled, can be remotely switched on and off, and will have digitally connected features that will be revealed closer to the launch.

The Ford Aspire EV was developed as a proof of concept in 2020, and it is understood that the Indo-American company could switch to the new Mahindra MESMA 350V architecture to bring out a sedan that can offer a long range and all the features of a modern electric powertrain in terms of connectivity, battery management and charging duration. It was earlier reported that Mahindra is developing a 60 kW motor that will be powered by a 25 kWh battery for application on the sedan project and the company is expecting a range close to 200 km. Expected to be unveiled in late 2021 or early 2022, both Mahindra and Ford plan on having their own versions of the electric sedan.

Mahindra unveiled the near-production eXUV300 at the Auto Expo 2020 and the model is lined up for launch in the second half of 2021. The eXUV300 gets a 350V powertrain that the company dubs as ‘MESMA.’ The XUV300 electric will go on to become Mahindra’s first high-voltage, high-performance SUV. The underlying Mahindra’s MESMA platform, a modular architecture that supports efficient EV powertrains, will have the eXUV300 go up against the Tata Nexon EV with a range of 370+ km to a charge. The eXUV300 also features a larger pop-up style touchscreen AVN and wireless mobile phone charger.

As per the update we received from before the Coronavirus shutdown, Porsche India will release its first fully electric sports car, the Porsche Taycan, in late 2020. The four-door sports saloon is the first to get a system voltage of 800V and the car uses a 93.4 kWh battery pack. It can be charged to 80% in just 22.5 minutes in ideal conditions and can be charged for a range of 100 km from a high power charging network in just over 5 minutes. The Taycan can be opted with ranges up to about 450 km (279 miles in the WLTP measurement). The top-spec Porsche Taycan Turbo S can accelerate from 0 to 100 km/h in 2.8 seconds, onto a top speed of 260 km/h.

After several postponements and presentations as a technology demonstator, the Nissan Leaf, the most recognizable electric car in the world with over 400,000 units sold since 2010, will be launched in India this year. While that update was received from before the COVID-19 hit, the car is now expected in 2021.

Spearheading the electric segment for Audi in India is the Audi e-tron, to be launched in the second half of 2020, having already been unveiled locally last year. The e-tron is powered by a 95 kWh battery mounted beneath the passenger compartment that feeds two electric motors, one on each axle. The combined output of up to 300 kW enables the e-tron to reach 100 km/h from standstill in just 5.7 seconds, with a top speed of 200 km/h and a driving range of 436 km (WLTP). With the help of fast DC charging stations at up to 150 kW, the e-SUV can be recharged to 80% capacity in 30 minutes. Expect the e-tron to cost north of INR 1 crore (ex-showroom).

Jaguar’s electric SUV, I-Pace, delivers sports car performance combined with five-seat SUV practicality. A 90 kWh Lithium-ion battery uses 432 pouch cells to deliver a range of 470 km (WLTP). 80% of the battery can be charged in just 40 minutes using a 100 kW DC rapid charging while a 7 kW home charger can do the same in just over 10 hours. Two electric motors placed at each axle offer 400 PS of power and 696 Nm of torque that can launch the I-Pace from 0 to 100 km/h in just 4.8 seconds.

Jaguar’s first electric car, when it comes to India during the festival season of 2020, is expected to be priced at around the INR 1 crore mark. Jaguar Land Rover India has partnered with Tata Power to set up a basic network of fast chargers for its customers.

Maruti Suzuki has been seen testing the Wagon R EV (the Japanese version) since 2018 and a crossover-styled product based on the Heartect platform based on the Indian Wagon R has already been developed. While the company was planning to launch the car in 2020, the release has been pushed back to 2021 citing poor infrastructure and high battery cost. Maruti Suzuki began testing 50 prototypes of Wagon R electric in 2018 and is expected to get a real-world range of 130 – 180 km. Though no details of the powertrain are available, the EV is believed to be equipped to have the fast-charging capability to be charged to 80% in just an hour and a 7-hour charging period with normal AC supply.

Previewed by a realistic concept at the 2018 Auto Expo, the production Mahindra Atom, M&M’s first quadricycle, was unveiled at the 2020 Auto Expo and will go on sale next year. Mahindra Atom is targeted as a greener alternative for regular auto-rickshaws and has a top speed of 50 km/h. Intended to be the electric urban mobility solution for last-mile connectivity needs, the Atom is built on a unique monocoque body, shares a few components from Treo electric auto-rickshaw and comes equipped with 4G ready connectivity system.

Based on the versatile ALFA (Agile Light Flexible Advanced) architecture and Ziptron technology, the all-new Tata Altroz EV is a premium car that is confirmed to launch in 2021. Powered by the same ZIPTRON powertrain as the Tata Nexon EV, the Altroz EV has been spotted testing earlier on the Indian roads. The car comes with a battery that powers a 300-volt AC motor which is mated with a single-speed gearbox. The ZIPTRON powertrain has a range of about 250 km in the real world. The IP67-rated battery packs make use of the lithium-ion cells, making them dustproof and waterproof. The battery charges from 0 to 80 per cent in 60 minutes through a DC fast charger. The Tata Altroz EV’s battery pack is caged in high strength steel as well as utilizes liquid-cooling.

Tata’s Maruti Ignis fighter is currently in the final stages of development and was showcased at the Auto Expo as the near-production Tata HBX. An Economic Times report said that following the Tata Altroz EV, the company will unleash the Tata Hornbill EV (codename) for a price of less than Rs. 10 lakh. The Hornbill electric will receive the Ziptron technology that gives it a high-capacity Lithium-Ion battery and powerful permanent-magnet AC motor to leave it with a 300+ km driving range (under ARAI test conditions). The Hornbill is set to become the most affordable long-range Tata electric vehicle when it reaches showrooms late next year.

The Renault Kwid Electric (Renault City K-ZE) is very likely the company’s first electric car in India. It retains the core strengths of the Kwid which include the 184 mm ground clearance, the 2,423 mm wheelbase and 300-litre boot capacity. Currently available in China, and is to be launched in Europe next year as the Dacia Spring, the Kwid Electric is powered by a 26.8 kWh Li-Ion battery and a 33 kW electric motor that gives it a range of 271 km (NEDC rated). The top speed is limited to 105 km/h. The electrified Kwid in fast charge, takes 50 minutes to charge from 0% to 80%, and in slow charge, it consumes 4 hours to reach 100% capacity. The K-ZE does not miss out on features, offering an 8-inch multi-functional LCD touch screen, and features like Tyre Pressure Monitoring, reverse camera and a fully digital instrument binnacle.

Mercedes-Benz India has revealed the electric vehicle equivalent of the Mercedes GLC Class – the Mercedes EQC – which will be introduced in Q3 of 2020 at a price of about INR 1.4 crore (ex-showroom). The EQC is powered by two asynchronous motors that develop 408 hp and 760 Nm of torque. The motor draws supply from an 80 kWh Li-Ion battery pack. The company has said that through the EQC it wants to establish luxury electric motoring in India.

Great Wall Motors (GWM) displayed the Haval Concept H plug-in hybrid electric SUV and has confirmed that an electric car will be launched in India. The company is planning electric vehicles under the Haval brand as well as the ‘GWM EV’ brand. No technical details have been revealed but it seems that Great Wall has got the design part right with the Concept H. The headlamps and tail lamps seem to be inspired from boomerangs and the grille features a jewel-like pattern. Blue accents adorn the front bumper and wheels to display the ‘eco’ credentials of the plug-in SUV. Inside, the concept gets a floating infotainment system and a second screen on the lower part of the centre console.

The Volvo XC40 Recharge is Chinese-owned Swedish brand’s first pure electric car and the first model to appear in the new ‘Recharge’ car line concept. Based on the XC40, the XC40 Recharge features an all-wheel-drive system with two motors, one on each axle and a 78 kWh battery. The XC40 Recharge gets a range of over 400 km (WLTP) on a single charge and output of 408 hp. The battery charges to 80% of its capacity in 40 minutes on a fast-charger system. XC40 Recharge can go from 0 to 100 km/h in 4.9 seconds and has a top speed of 180 km/h. It also becomes the first Volvo to get an infotainment system powered by Android, with built-in Google Assistant, Google Maps and the Google Play Store.

Tata Motors launched the Nexon EV priced from Rs 13.99 lakh ex-showroom, making it India’s most affordable electric SUV, undercutting the MG ZS EV. The Nexon EV is available in three variants – XM, XZ+ and XZ+ LUX – priced at Rs 13.99 lakh, Rs 14.99 lakh and Rs 15.99 lakh ex-showroom respectively. The Nexon EV will be available across 60 dealerships in 22 cities. The e-SUV gets a 30.2 kWh battery that drives a permanent magnet synchronous motor that produces a torque of 245 Nm and can accelerate from 0 to 100 km/h in 9.9 seconds. With a regular charger, the Nexon EV takes 8 hours to be fully charged and only 60 minutes with a fast charger. On a single charge, it will return a range of 312 km (ARAI-certified).

The MG ZS EV, launched in 11 cities in 2 variants, features a water-cooled 44.5 kWh lithium-ion battery pack that powers a front-mounted electric motor delivering 105 kW of power and 353 Nm of instant torque. The ZS EV can accelerate from 0 to 100 km/h in just 8.5 seconds and achieve a top speed of 140 km/h. The battery, which has a range of 340 km, supports 5-way charging infrastructure and fast charging with which it can be charged to 80% in 50 mins. The MG ZS EV comes with a 5 years/unlimited km warranty and is expected to become available in more cities in the future.

The Hyundai Kona was the car that kicked off the long-range electric car era in India. Priced currently at Rs 23.75 lakh (ex-showroom) in 11 cities of India, the Kona is powered by a high-voltage 39.2 kWh advanced lithium-ion polymer battery powering a 136 PS permanent-magnet synchronous motor. It develops 40.27 kgm of torque directed to the front wheels and can accelerate from 0 to 100 km/h in just 9.7 seconds. The Kona returns a range of 452 km in a single charge and can be charged to 80% capacity in 57 minutes with a 50 kW DC fast charger.